What’s Behind The Assassination Of Haitian President Moïse? 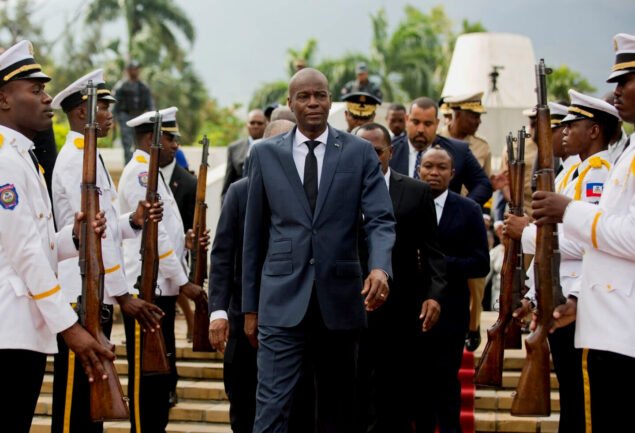 Journalist Kim Ives joins Behind The Headlines Correspondent Dan Cohen to discuss the aftermath of the assassination of President Jovenel Moïses and the revolution brewing in Haiti.

The assassination of Haitian President Jovenel Moïse sent shockwaves through the tiny Caribbean island nation and beyond. While little is known about what happened overnight Wednesday, it appears that a group of foreign mercenaries with inside knowledge of Moïse’s home were responsible for carrying out the operation that killed him.

Moïse was an extremely unpopular figure who had overstayed his term as president as was ruling by decree. Mass protests against his rule and corruption have coalesced into a revolutionary movement led by former police officer Jimmy “Barbecue” Cherizier. Cherizier has managed to unite nine gangs into a single movement aimed at redistributing wealth amassed by the country’s wealthy minority.

Journalist and English language editor of the media outlet Haite Liberte, Kim Ives, joins Dan Cohen to discuss who might be behind the assassination of Moïse and the revolutionary movement brewing in the streets.

My guess is that it’s more coming from the bourgeoisie. And that’s because there is a revolution underway in Haiti. The huge lumpenproletariat of Port-au-prince has grown to over three million people. Fifty years ago Haiti was primarily an agricultural society, small peasants. But due to neoliberal policies, the dumping of rice under the Clinton administration on Haiti and destroying Haitian rice production, destroying the lemon production, the coffee production, a lot of the dumping is coming from the Dominican Republic too.

Essentially Haitian agriculture is a shadow of its former self and all those displaced peasants ended up in the cities in these huge shantytowns where people have no work, no services, and they’re living day-to-day. As a result what have emerged are strongmen, in these neighborhoods, gangs, some of them engaged in kidnapping and crime and terrible things, preying on even their own population. But there is another faction that emerged which called itself the G9, now it’s called the Revolutionary Forces of the G9 family and allies. And they were against the criminal elements. They were fighting the criminal elements and in fact, have now called for a revolution.

Their leader, a guy called Jimmy “Barbecue” Cherizier – and we can talk more about him – has said “We’re going to the banks, we’re going to take the money that’s ours there. We’re going to go to the car dealerships to take our cars. We’re going to go to the supermarkets and take our food. So he’s calling for a revolution of the people in these shantytowns of the lumpenproletariat against these bourgeoisie, twelve families, as he says, who control the entire economy. The ports, the factories. They own a lot of the land, etc. So I think they were scared to death of this guy. He scared the daylights out of them. Add to that fact, one of the principal opposition leaders or I should say opposition bourgeois backers is a guy Reginald Boulous, had an arrest warrant put out for him this week.

Between Cherizier’s revolution, which looked like the end of the world to them, plus the arrest warrant, I don’t think it’s far-fetched to think that a number of the bourgeois, or maybe one or maybe a consortium of them because this operation definitely cost some money, may have got themselves together, hired these mercenaries, they go in, they do the job, they get Jovenel out of the way, and now they are going to concentrate on putting down this rebellion from the shantytowns. Put down this lumpenproletariat. Now the big problem there is how are they going to do it?

They need somebody strong in leadership. And Jovenel was not that. Jovenel was embattled, Jovenel was isolated. He had no state authority, so they need to get a strong leader in. They need to reinforce the 15,000 member police force. There is only 500 soldiers in the army. And so this is maybe Plan A. But Plan B, maybe, a fourth foreign military occupation, where the US comes in and says “Look, it’s terrible. They killed the president. They couldn’t do them, they don’t know how to carry out democracy, we have to come in again. We hate to do it. And they try to send in another UN force. Their big problem there is that they declared war on China. So China can say screw that. You guys aren’t doing anything with this security council. You aren’t doing anything with this security council. You’re not getting any chapter 7 again for Haiti. So Biden may find himself between a rock and a hard place on this one. I don’t know if they’re going to be able to get a fourth military occupation in a century into Haiti and the Haitian people certainly are not going to accept it. So we have a very complicated situation.”

Dan Cohen is the Washington DC correspondent for Behind The Headlines. He has produced widely distributed video reports and print dispatches from across Israel-Palestine. He tweets at @DanCohen3000.