What Western Appraisals of Kenneth Kaunda Left Out 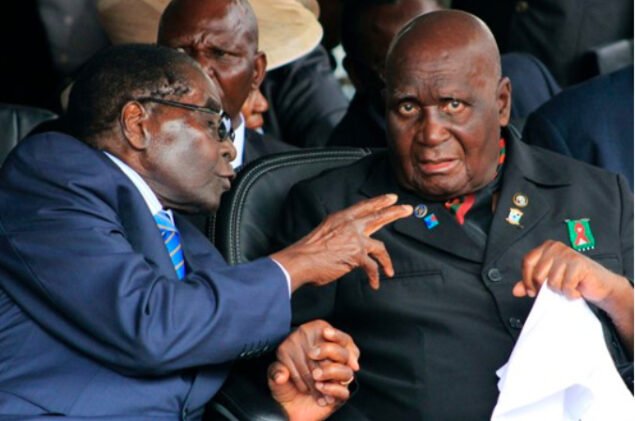 When Kenneth Kaunda, Zambia’s former president and founding father, died last week at the age of 97, what followed in the Western media was a series of entirely predictable and desultory summations of an African leader’s long career in politics and public life. This essay by Howard W. French is essential reading to honor the memory of Kenneth Kaunda.

When Kenneth Kaunda, Zambia’s former president and founding father, died last week at the age of 97, what followed in the Western media was a series of entirely predictable and desultory summations of an African leader’s long career in politics and public life.

There was mention of his upbringing in the church in a part of Africa then known as Northern Rhodesia, and its lasting effects on Kaunda’s moderating humanism. There were the unfailing descriptions of his affectations, like carrying a white pocket square, which he pulled out to daub his eyes when occasionally shedding tears in public, or his love of the songs that were popular in the era of independence on the continent in the early 1960s, marking Kaunda as a sort of ancient relic compared to younger audiences that have seemingly forgotten them.

Most of all, though, there was a kind of facile verdict issued about a man almost patronizingly treated as likeable enough, perhaps, compared to many rougher African characters of his time, but sadly unequal to the task of leading a poor nation like his through the early phases of its independence. Almost all the foreign accounts concluded that he was a failure on two scores, both diplomatic and economic.

The verdict of failure, however, is mostly a matter of the Western press’s unwillingness to consider African history in any depth, or to candidly acknowledge just how hostile the tides of Kaunda’s era were to the prospects of African autonomy and development. Even less do they acknowledge just how profound the West’s contribution was to making life on the continent difficult.

This omission is most prominent in many of the Kaunda obituaries where they present him as a sentimental and naïve figure who, in his repeated diplomatic bids to engage with then-white-ruled Rhodesia and South Africa, failed to get them to moderate their behavior, whether by ending their persistent military efforts to destabilize or overthrow Black-ruled Southern African states, or, later, by allowing democracy to take hold in South Africa itself.

Seldom did these chronicles note how reticent the West itself, led by Britain and the United States, was to accept Black rule in this part of the world, with Margaret Thatcher and Ronald Reagan temporizing about meaningfully opposing apartheid until late in the 1980s. Even the U.S. State Department’s official website nowadays acknowledges much of this, saying that Western “defenders of the Apartheid regime … promoted it as a bulwark against communism.”

This era coincided precisely with the final leg of Kaunda’s 27-year rule, and it is hard to see how he himself could have achieved any more through diplomacy when the greatest powers of the West were still tacitly supporting South Africa’s white-minority regime.

The troublingly ahistorical treatment of Kaunda’s life and career begins, however, at a much earlier stage. Few of the obituary writers even bothered to mention the crippling legacy of European colonialism in Zambia, as in most of Africa’s newly minted countries in the early 1960s. Europeans had done precious little to prepare their erstwhile ostensible wards for success. This meant few roads or other infrastructure, and little education. How little? Britain left Zambia at its birth with no universities and only 0.5 percent of its youth even completing primary school. Such as it existed, the country’s economy consisted of copper mining, which was held entirely in foreign—mostly British—hands, leaving most of Zambia’s people either to subsist in the darkness of their villages—here meant literally, without electricity or most of the other amenities that we usually take for granted—or to pin their hopes on a life of dangerous and low-paid migrant labor in South Africa.

Kaunda quickly took up the challenge of education and by 1966 had created schools in every district of the country. Hemmed in by hostile Rhodesia and South Africa, meanwhile, he set about forging new international relationships for his nation, reaching out to the Soviet bloc, but remaining proudly independent of it as he helped solidify the emergence of the new, so-called Non-Aligned Movement.

Contrary to most of the recent portraits, Kaunda was a leader who played a weak hand with boldness and imagination.

Contrary to most of the recent portraits, this was a leader who played a weak hand with boldness and imagination. Kaunda’s Zambia helped usher Beijing into the United Nations in 1965 and was rewarded soon afterward with what by some measurements remains the largest foreign assistance investment that China has ever made: a $500 million railway linking landlocked Zambia to the Indian Ocean via neighboring Tanzania. The United States had notably refused to back the project, which allowed Zambia to bypass hostile South Africa and Rhodesia, and therefore maintain its political independence.

In their consensus view that Kaunda was a failure in his economic stewardship of the country, the obituary writers committed perhaps their most egregious, but hardly unprecedented, oversight. What is most remarkable when one considers the record of his independence-era peers in Africa is how nearly all of them would have to be described as having failed when one applies the narrowest of conventional journalistic yardsticks, as these writers do.

This includes a range of progressives, some of whom were arguably much further to the left than Kaunda. Consider Kwame Nkrumah, of Ghana, who, spurned by the West, reached out to the Soviet Union for help in building the huge Akosombo Dam to power his ambitions for rapid industrialization based on an aluminum industry he aspired to build by drawing on the country’s large bauxite reserves. Consider Sekou Toure, of Guinea, who spurned his country’s former colonial ruler, the French, believing that it was preferable to leave his land’s enormous mineral reserves in the ground, where they would be conserved for future generations, rather than submit to Paris’ continued economic and political domination. Consider Julius Nyerere, of Tanzania, who sought to institute a new form of African socialism built on collective efforts to improve lives in rural villages, where most of the population lived, and thereby achieve greater national self-sufficiency. They all received negative verdicts just as sweeping as the ones just issued on Kaunda.

Where this becomes more interesting, though, is when one considers the economic records of Africa’s conservative leaders from the same era, even the ones who aligned themselves most enthusiastically with the West. One is hard-pressed to find a ringing success story among this group either, and you will search in vain for true economic takeoff. Here, the career of Cote d’Ivoire’s late founding father, Felix Houphouet-Boigny, is instructive. An ardent practitioner of capitalism, his three decades of rule ended with Cote d’Ivoire perennially ranked as one of the top global producers of cacao and coffee, but with poverty and stark inequality still endemic. Today, per capita income in a country once held up as a showcase for the West is an extremely modest $2,276, according to the World Bank, a razor-thin margin higher than that of erstwhile socialist Ghana next door. Other countries that have been held up as economic darlings of the West for adherence to the prescriptions of the International Monetary Fund and World Bank—like Uganda, for example, where per capita income is $794—rank even lower.

Too few in the West, including those who direct policy toward Africa, take much interest in what this tells us. It is true that Africa has had more than its share of genuinely bad leaders, but that explanation for the continent’s broad failure to break through economically only gets one so far. Late in their political lives, with their nearly opposite politics—one on the left, the other on the right—Kaunda and Houphouet-Boigny each made bold, almost desperate gambles to break out of the economic holding patterns their countries had been locked into. Kaunda nationalized copper production in his country, in the hopes of ensuring that the revenues could be used to improve living conditions for Zambians instead of merely enriching foreign investors. Houphouet-Boigny withheld Cote d’Ivoire’s cacao from European buyers, hoping that he could shock world markets into paying a fairer price for his country’s most important commodity. Both bids failed, and both men were severely punished by markets that cared little for their people’s needs or aspirations.

What the writers of the facile conventional judgments about Africa’s modern political history fail to acknowledge is the level of difficulty faced by the continent’s fragile new states as they entered the world stage, crippled by the stinginess of colonial rule and daunted by a West that only took interest in them in shallow, episodic ways that were utterly framed by Cold War competition.

What Zambia or Cote d’Ivoire, Ghana or Guinea needed most then were investments that would allow them to begin transforming their own products into finished and semi-finished goods, as the start of a process of industrialization—and it is what they still need most now. And until that day comes, they will need rich Western countries to open up their markets much more widely than they have ever been willing to do for African goods, especially farm products.

It is this legacy of parsimony and neglect that caused so much of Africa to turn eagerly toward China when that country began to reengage with the continent more than two decades ago. Nowadays, with no sense of irony, Westerners can be frequently heard to warn of an ongoing Chinese “takeover” of Africa. If it is true that, when it comes to offering African countries investment, China is mostly in it for itself, it is even more true that when it comes to accepting those offers of investment, African countries are also in it for themselves. What is even more obvious is that where Africa is concerned, the West has never answered the call.

Howard W. French is a career foreign correspondent and global affairs writer, and the author of four books, including most recently “Everything Under the Heavens: How the Past Helps Shape China’s Push for Global Power.” You can follow him on Twitter at @hofrench. His WPR column appears every Wednesday.