On Tuesday, the Dutch Safety Board will release its final report on the fate of the crashed Malaysian Airlines MH17 flight. Ahead of the report’s publication we take a look at the key facts, theories and false trails surrounding the investigation. Trends Malaysia MH17 plane crash 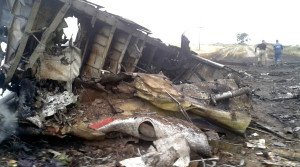 The crash of Malaysian flight MH17 took place on July 17, 2014, in Eastern Ukraine, killing all 298 passengers and crew members onboard, among them 80 children.

The international probe launched immediately after the crash has taken 15 months to prepare. Preliminary findings claimed that the plane broke up mid-air after being hit by high-energy objects. The final report of the Dutch Safety Board is expected to be delivered on Tuesday, October 13.

On July 23, 2014, it was confirmed that the MH17 black boxes were delivered by Dutch officials to a British laboratory for analysis, promising results “inside 24 hours.” That was nearly 15 months ago and the general public is still unfamiliar with this data. The mainstream media were quick to point the finger at Russia right from the start, claiming that Moscow was responsible for bringing down the plane.

Western media carried strong anti-Russian headlines, most of them blaming personally President Putin for the deaths of all the passengers and crew onboard.

That was well before any investigators had even reached the crash site, and the allegations were based on snap judgments and little information. The day after the crash, Ukraine released what it called “intercepted phone conversations,” allegedly proving that anti-government fighters shot down MH17 by mistake. Kiev also alleged that the rebels obtained a BUK air defense missile system from Russia. Moscow dismissed the tapes that could not be verified independently as outright fakes?

Actually, there are two separate international probes into the crash – the technical probe led by the Dutch Safety Board, which is due to present in conclusions on Tuesday, and a criminal probe, carried out by a Dutch-led Joint Investigation Team, which is still ongoing.

While the Dutch Safety Board is looking into what caused the accident, the criminal probe is supposed to reach a conclusion on who was responsible for the crash.

Russia has appealed to the head of the UN aviation agency to intervene in the investigation into the MH17 crash to prevent the Dutch Safety Board (DSB) from ignoring the findings of their Russian counterparts.

A letter from the Deputy Chief of Russia’s Federal Air Transport Agency to the International Civil Aviation Organization (ICAO) claims that the DSB ignored “comprehensive information” relating to the downing of the Boeing 777 over war-torn Eastern Ukraine on July 17, 2014, provided by the Russian side and violated the principle of “sequence of conclusions.”

There are three theories as to what brought down the plane. They all imply use of weapons: either a surface-to-air missile, or an air-to-air missile.

The Dutch Safety Board delivered a preliminary report about a year ago, concluding that flight MH17 broke up in mid-air and came down after being hit by a large number of high-energy objects that penetrated the plane from the outside and ruptured the fuselage. The report did not mention where those high-energy objects came from.

The first theory maintains that the MH17 flight was downed by a surface-to-air anti-aircraft missile. It is considered by many as the most likely theory and one that’s been widely cited in the media. The only question is who did it.

The West and Ukraine claim the rebels shot the plane with a Russian BUK missile. In the framework of this theory, a YouTube video of a BUK weapons system with one rocket missing being transported somewhere in Ukraine just hours after the crash was presented as a smoking gun, claiming that the missile system was sneakily cleared out of Ukraine into Russia.

But some local bloggers identified the location as the Ukrainian town of Krasnoarmeysk, which was under control of the Kiev forces at the time.

The fact that the video emerged online suspiciously quickly, was followed by lots of so-called social media evidence, and is almost impossible to authenticate, only fueled suspicions.

At the same time Russia’s Defense Ministry made public satellite images of the area, taken several days prior to the crash. The satellite pictures showed Ukrainian army positions on three days before the crash, and a BUK missile launcher could be spotted there. But on the day of the crash, it had moved somewhere else. The question is why – and where it had gone?

In June 2015, Russian arms manufacturer Almaz-Antey presented the results of its own probe into the causes of the MH17 crash. Looking into the option of a surface-to-air missile downing the Boing-777, experts stressed that it could only have been caused by one of the missiles from an older modification of the BUK missile system, namely the Buk-M1 – the type of the weapon the Ukrainian army is equipped with. The Russian army uses modern and later BUK missile systems.

Another theory is that Flight MH17 may have been shot down from the air.

Russia’s Investigative Committee (IC) has been conducting its own investigation into the crash. On June 3, the Committee identified the key witness to the MH17 crash as Evgeny Agapov, an aviation armaments mechanic in the Ukrainian Air Force. Agapov testified that on July 17, 2014 a Ukrainian Sukhoi SU-25 jet aircraft piloted by Captain Voloshin “set out for a military task” and returned without ammunition. Agapov implied that an air-to-air missile was missing and claimed he overheard Voloshin say to his colleagues that some plane was “in the wrong place at the wrong time.”

Also, in a video shot by Ukraine’s anti-government militia when they arrived at the crash site immediately after the catastrophe and released by an Australian broadcaster almost a year after the tragedy, one important part was largely ignored. The video, shown by News Corp Australia, is a short, 5-minute clip made from an original video 17 minutes long, but the channel published online a full transcript of the original version.

The transcript cited the rebel commander as saying “the Sukhoi jet brought down the civilian plane and ours brought down the fighter jet.” Later, the same person says once again that there were two planes shot down, and another voice in the background says, “They decided to do it this way, to look like we have brought down the plane.”

Those who oppose the theory say the Sukhoi Su-25 close support fighter jet spotted in the skies at the time of the incident cannot reach a height of 10,000 meters, where the Malaysian airliner was at cruising altitude. But a documentary crew making a film about the MH17 catastrophe has actually proven them wrong, staging an experiment and taking an Su-25 to a height of 11,880 meters – with a pilot wearing an oxygen mask.

The report coming out Tuesday will be technical in nature. Its goal is to specify how the plane was brought down, not to place blame on any side. This is the responsibility of the criminal probe, which is still ongoing.