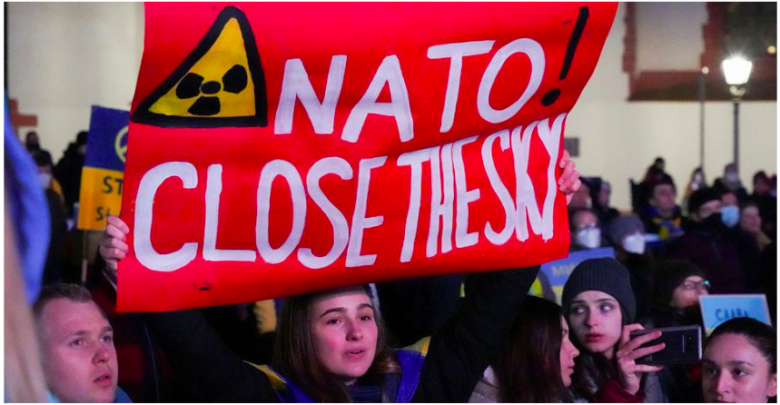 Last week, Reuters/Ipsos reported on a poll that found some 74% of Americans―including solid majorities of Republicans and Democrats―said the United States and its allies in the North Atlantic Treaty Organization should impose a no-fly zone in Ukraine. This was a surprising result, because there was strong bipartisan opposition in Congress to such an action. Typically, public opinion―especially on foreign policy―tends to reflect the prevailing political consensus. 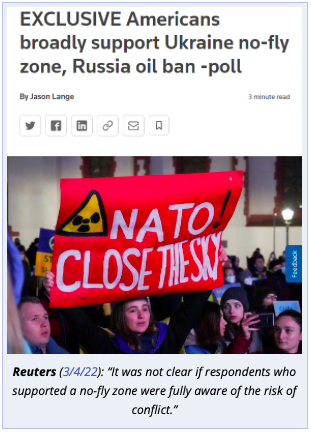 some 74% of Americans―including solid majorities of Republicans and Democrats―said the United States and its allies in the North Atlantic Treaty Organization should impose a no-fly zone in Ukraine.

This was a surprising result, because there was strong bipartisan opposition in Congress to such an action. Typically, public opinion―especially on foreign policy―tends to reflect the prevailing political consensus.

In its third poll for US News, YouGov ran a split-sample experiment, with half the sample asking respondents if they would “support or oppose the US enforcing a no-fly zone over Ukraine,” and the other half asking the same question with the additional comment: “which would mean the US military would shoot down Russian military planes flying over Ukraine.” The purpose was to determine if an explanation of what a no-fly zone means would affect support.

But when YouGov rephrased the no-fly question in terms of the action required, it got a markedly different response. The second Economist poll asked, “Should the US military shoot down Russian military planes flying over Ukraine?” A 46% plurality said no—16 percentage points more than said a no-fly zone was a bad idea.

And as the report indicated, large segments of the respondents gave self-contradictory answers:

The Reuters poll can be dismissed as a representation of actual public opinion. Typically, Reuters/Ipsos does not measure, or ignores, “don’t know” or “unsure” responses. As I noted in a previous post (FAIR.org, 2/11/22), using that “forced-choice” format creates the illusion of public opinion, but does not give a plausible picture of reality.

The YouGov polls, by contrast, all included measures of “no opinion.” The poll for US Newsalso included a measure of intensity, which provides even more insight into what the public is thinking. 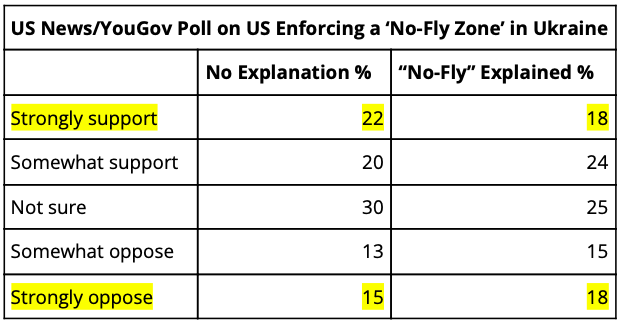 Typically, news media combine the “strong” and “somewhat” categories when reporting the results—as I did above (42% to 28% in the first group; 42% to 33% in the second group). But that format suggests a more solidly opinionated public than is warranted.

Note the highlighted numbers. For both groups, only just over a third of respondents felt “strongly” about their views (37% strongly support or oppose in the first group; 36% in the second group). The rest are either “unsure” or hold views that are loosely held (“somewhat” support or oppose).

The weakly held or “top of mind” views explain how many people can provide self-contradictory responses. They simply haven’t given the issue much thought. New questions elicit new opinions, some of which contradict previous responses.

Those weakly held views also explain why “public opinion” can seem to fluctuate so greatly, as new information comes to light.

The key conclusion here is that most Americans have not firmly decided about the merits of a US-enforced no-fly zone. That conclusion no doubt holds true for most, if not all, of the other policy proposals included in the poll. 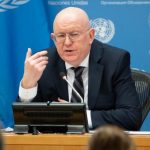 Statement and right of reply by Permanent Representative Vassily Nebenzia at UNSC briefing on the humanitarian situation in UkraineRussia, Ukraine 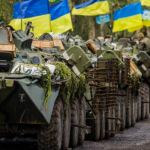