The major expectation of the Maidan protest a year ago was replacing the burden of corruption and mismanagement of the economy with the benefits of EU integration. The reality brought collapse and a debt trap. 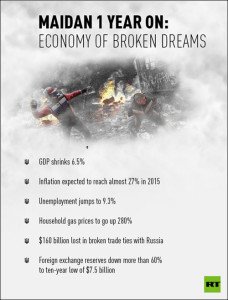 The protests that ousted President Viktor Yanukovich in February 2014 started after his government postponed the signing of a key EU integration treaty. The EU Association Agreement opens the Ukrainian market to European goods and required that its industries adopt European standards. Both would take a heavy toll on the already ailing economy due to the cost of modernization and the loss of Russian markets. Moscow also warned it would protect its home market from European goods by revoking the tax-free trade deal with Ukraine.

Critics of Yanukovich, most notably Arseny Yatsenyuk, then-leader of a major opposition party, dismissed such concerns. Speaking on political talk shows and from the Maidan stage, Yatsenyuk gave vivid descriptions of how Prime Minister Nikolay Azarov was hurting Ukraine with his policies and how he would do a better job.

He promised visa-free travel to Europe for Ukrainian tourists and guest workers, rising wages and social benefits, reining in national debt, lowering utility prices, bringing in billions of dollars of foreign investments, and many other things.

Azarov went with Yanukovich and was replaced with Yatsenyuk, but the reality under the new cabinet is nothing like the picture presented a year ago. The Ukrainian economy experienced a deep plunge in 2014. Its GDP dropped 6.5 percent last year, according to International Monetary Fund (IMF) figures, the only two countries worse were South Sudan and Libya.

The unemployment rate reached 9.3 percent in the third quarter of 2014, as compared to 7.7 percent in 2013. The figure is expected to rise sharply in 2015. Ukrainian job search websites report a 30 to 50 percent drop in the number of employment offers over a year.

“The country is at war that they cannot afford to fight. There is no economy any longer. When you look at where the industrial base of Ukraine is and the conflict going on in the east there is absolutely no doubt as to why it is happening,” Gerald Celente from the Trends Journal told RT.

“That $160 billion loss of trade with Russia has destroyed the economy when it was already in a severe recession. It went from very bad to worse than depression levels.”

Ukrainians’ savings and wages suffered a serious blow with the devaluation of the national currency, the hryvnia. In 2013 the exchange rate was about eight hryvnia to the dollar while the current rate is at 27 hryvnia to the dollar. Debtors who had their loans denominated in foreign currencies – as is the case for mortgages and other long-term borrowing – found the maintenance of their debts skyrocket.

The Central Bank’s attempts to slow down the process through limiting currency exchange operations and the withdrawal of assets from banks, and forcing exporters to sell foreign currency they earn only produced a lucrative black market.

Prices are rising and will continue to do so. The latest amendments to the national budget submitted by Yatsenyuk’s cabinet to the parliament estimate inflation in 2015 could reach almost 27 percent, a rise from the previous estimate of about 13 percent. Utility prices would be among those affected. The price of gas for households may rise as much as 280 percent, the central bank warned.

The amendments are part of an austerity strategy that Kiev adopted to secure IMF loans. The international creditor announced a new $17.5 billion lifeline for Ukraine which raises the total bailout to $40 billion. Yatsenyuk hailed the austerity-for-loans deal as a major victory for his cabinet.

Amid the economic problems Ukraine announced a six-fold increase in military spending, which would reach an all-time record in 2015. Kiev says the money would be spent to reform its army to fight “Russian intervention” in Eastern Ukraine. The Ukrainian government says the rebels in Donetsk and Lugansk regions, who rejected the coup-imposed government in Kiev, are Russian proxies fighting with Russian arms alongside Russian regular troops. Moscow denies the allegations.

So far the military crackdown in Eastern Ukraine devastated the industrial hub, with Kiev estimating that half of the Donetsk and Lugansk mines and factories had been destroyed. The regions also saw massive decrease in the workforce, with people either fleeing the violence or joining the militias.

Kiev’s other economic measures which appear to be motivated by the ideologies of its current regime rather than economic considerations include severing trade ties with Russia, a failed attempt to replace coal mined in the breakaway areas with that imported from South Africa, a continued conflict with Russia over transit of natural gas to Europe which forced Moscow to announce a total end of the transit in three years.

European countries stated their reluctance to offer Ukrainians visa-free entrance, not to mention EU membership. Meanwhile in Ukraine journalists are being charged with treason for publicly rejecting the war effort, the same political talk shows that gave air to Yatsenyuk in the Maidan days has been kicked off the TV after interviewing a Russian public figure. Judges refused to try a case against the Ukrainian Communist Party, which was accused of encouraging separatism by the new authorities.

A Ukrainian political joke says that somebody painted “Viktor, you bastard, come back!” on the wall of Yanukovich’s former residence. 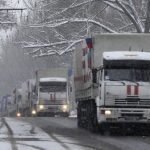 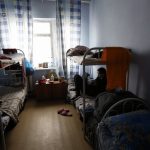