By Sergei Markedonov, published in Russian on politcom.ru, translated and published in English on Open Democracy, June 24, 2015

Fresh protests in Yerevan have their roots in a number of deep-rooted domestic issues in Armenian politics. But we make comparisons to other protest movements at our peril.

Last night, some 6,000 people marched towards President Serzh Sargsyan’s residence in Yerevan. Water cannons against protesters have been used against participants in what has already been dubbed ‘Electric Yerevan’ in reference to the cause of the protests: rising energy prices.

Tuesday’s initial mass protest against hikes in electricity tariffs, and the authorities’ reaction against them, have had a noticeable effect on the country’s political situation. According to the Armenian police, 237 people were arrested on 23 June and, in total, 29 people suffered injuries, including 11 police officers. But while this situation has already begun to provoke comparisons with recent events in Ukraine, these protests have a domestic trajectory which should not be ignored.

Why are Armenians protesting?

On 17 June, 2015, Armenia’s Commission on Regulating Civic Services examined a document from Electricity Networks of Armenia (the ENA, which owns and manages the country’s national grid). This company is part of Inter RAO, a large energy holding company based in Moscow.

According to the Armenian police, 237 people were arrested. In total, 29 people suffered injuries, including 11 police officers.

Though it is a publicly traded company, Inter RAO is often seen across the post-Soviet space as an instrument of Russian energy politics (critics of the Russian Federation go as far as calling it a tool of ‘Russian energy imperialism’).

Thus, many internal political decisions in Armenia are seen (or can be seen) in light of this relationship, even if Moscow itself does not directly influence concrete administrative decisions in Yerevan. ENA is thus extremely important for Moscow-Yerevan relations and, of course, how Armenian society perceives them.

ENA petitioned for a 16% rise in electricity tariffs, and this rise was due to come into force on the first day of August. The Commission’s decision was the immediate cause for the public’s dissatisfaction. Two days later, a sit-in started in central Yerevan, where protesters shouted simple slogans, such as ‘No to theft!’.

After the protesters’ demands were left unaddressed, they marched towards Baghramyan Avenue, the centre of Armenia’s central state apparatus. It was these demonstrations that resulted in clashes with police.

The authorities have their own reasons for being so heavy-handed. The paralysis of state institutions is fraught with dangerous consequences. And there are those among the protesters who would like to use this mass protest for their own political gain. However, the authorities’ actions in June 2015 look more like the temporary treatment of a symptom rather than a systematic treatment of a far deeper illness.

These protests are the latest, not the first

It would be hard to say that protest demonstrations here in Armenia were unexpected. This is not the first time public dissatisfaction with the authorities (and not just the ever-loathed ‘bureaucracy’, but the current administration in particular) has been manifested.

People have had many grounds to come out on the streets. The economy languishes. Remittances from workers abroad make up a large chunk of the economy. Citizens differ on the best way to provide security to the country against hostile neighbours.

During the 2013 presidential election, when Serzh Sargsyan faced little political competition and many political heavyweights ‘refused’ to participate, Raffi Hovannisian, an ex-foreign minister and leader of the Heritage party, took 36% of the vote. Hovannisian is not known for his electoral successes, and Heritage, a liberal democratic party with traditional leanings, holds only four seats in the Armenian parliament.

Hovannisian’s ‘success’ was the result of a protest vote, pure and simple. Electors voted for Hovannisian because, for various and different reasons, they were unhappy with the current authorities. Indeed, the result was less a vote for Hovannisian, than one against Sargsyan. The fact that the Heritage leader didn’t manage to convert this success at the subsequent elections to the Council of Elders (the highest organ of self-government in Yerevan) is an indication of Hovannisian’s poor leadership, as well as the authorities’ ability to counter the opposition. But these factors did not quell the existing social problems and dissatisfaction.

Later that year, in November 2013, there were clashes between police and participants of a so-called Million Mask March, when anti-establishment protesters gather in cities all over the world. Of course, there weren’t a million people in masks in central Yerevan. And the demonstration didn’t receive mass support: the protest attracted roughly 100 people. However, 20 people were arrested, 38 were detained and 9 – hospitalised. The clashes were also marked by the use of Molotov cocktails and smoke grenades.

The most notable thing about the protest was its reception: after the smoke cleared and the fires doused, Shant Aruntyunyan, leader of the nationalist Tseghakron party, called it a ‘revolution.’

Back then, many Russian journalists (just like today), turned to a ‘comparative’ lens in order to understand this ‘Yerevan Maidan’. And although the protest didn’t led to any significant results, November 2013 did reflect Armenian society’s disposition to protest and activism.

Likewise, Vladimir Putin’s visit to Armenia in December 2013 also provoked demonstrations. And although protesters made the Russian leader a target of their criticism and what the protesters saw as his attempts to ‘drag’ the republic into the Customs Union, domestic circumstances also played a role. Many people saw Eurasian integration not as another guarantee of Armenia’s security, but also as a route to higher tariffs and cuts to government services.

The danger of lazy analogies

Since the beginning of Kyiv’s ‘EuroMaidan’ in November 2013, which led to a change of government, triggered a European crisis and caused the most serious confrontation between Russia and the West since the end of the Cold War, most opposition activity in the post-Soviet space is viewed through a ‘Ukrainian lens’.

In addition to causing lazy analogies between different political situations, this approach shifts the domestic political agenda in any given country to the background. Instead, domestic politics is made a sacrifice to ‘geopolitical determinism’, according to which any crisis in former Soviet territories are merely a reflection of the ‘proxy war’ between America and Russia.

Thus, an otherwise obvious point disappears from view: political crisis is not a virus. Of course, judging by purely external signs, you could unite the events of the Arab Spring, the 2003 Rose Revolution in Georgia, two Maidans in Ukraine, and two changes of power in Kyrgyzstan into a single whole.

But this obscures fundamental differences. When talking about Egypt or Tunisia, the issues of Kurds or Alawites don’t figure, and in the case of Syria, no one talks about the merits of ‘strategic partnership with the West’ like they do in Ukraine.

Prior to 2003, Georgia had already experienced two ethnopolitical conflicts in Abkhazia and South Ossetia (and received two de-facto states on its territory in return); before the ‘second Maidan’, Kyiv didn’t see Crimea or Donbas as potential points of conflict. The armed conflict in Ukraine’s east is just one of the consequences of a revolutionary change of power in the country. Just as post-revolutionary Georgia intensified its struggle for territorial unity, making it the cornerstone of its domestic politics and foreign policy, so did Ukraine encounter a similar problem after EuroMaidan.

Clearly, no country exists in a vacuum. Countries are of interest both to their strategic allies and partners, and to their opponents and competitors. Here, both groups try to influence what is happening in any given country, and extract maximum profit for oneself in the process. But whatever interests external forces might pursue, there have to be certain ‘domestic’ pre-conditions for social protest and political crisis. And they are present in Armenia.

So, before we apply the Ukrainian lens to Armenian reality, forecasting a ‘change in Yerevan’s geopolitical vector’, we should pay closer attention to domestic political dynamics in this small Caucasian republic. Not least of all because Russia considers Armenia to be a strategic partner.

In contrast to Ukraine, in Armenia today the authorities and opposition are not squaring off against one another on the basis of their attitude to Russia. This issue is not a fundamental part of their conflict. Even today, you can easily find people in the Armenian bureaucracy who are sceptical about Eurasian integration. And you can easily find supporters of deeper ties to Moscow among the opposition. Just take a look at statements by Levon Ter-Petrosyan, leader of the Armenian National Congress, which ultimately boil down to this: Putin is not our opponent, the current government is.

But under certain conditions, this ‘connection’ could be made. In particular, if Russian politicians and diplomats draw the wrong conclusions from these protests and make their own connection: the opposition is part of a US State Department plot (making support of the Sargsyan government an absolute priority).

One need not have illusions about American or European ‘good intentions’ when it comes to Russia’s interests in the post-Soviet space. But to reduce the domestic political agenda to the evil designs of the EU, Nato and US is a serious mistake, which could have a negative impact on Russian-Armenian relations. 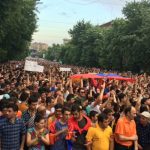 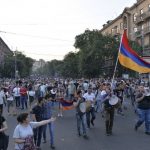