‘What about Crimea?’ is latest narrative by Canada’s foreign affairs minister

A news compilation on New Cold War.org on March 8, 2017 reported the controversy that has broken out in Canada surrounding the family history of Canadian Foreign Affairs Minister Chrystia Freeland. Her maternal grandfather edited two pro-German newspapers in Poland and Austria during World War Two. He and his family settled in Canada after the war. 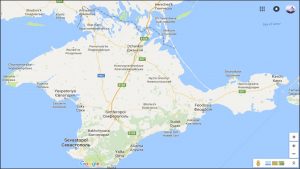 Map of Crimea, dotted line is border with Ukraine. ‘Yes, but what about Crimea?’ is Canadian foreign minister’s latest narrative for handling queries into her family history

The minister told a March 6 press conference in Ottawa that inquiries into her family history constitute a ‘Russia disinformation’ campaign directed at her and the Canadian government. The minister as well as sympathetic journalists state that the ‘disinformation’ has been aided and abetted by unnamed ‘pro-Russia’ websites.

The Globe and Mail has published an article on March 16, 2017 in which Minister Freeland hits back at critics questioning her responses to the family history. The article is titled ‘Freeland condemns Russian aggression in Crimea, prompting Kremlin counterattack’. It provides a long list of alleged human rights violations in Crimea as listed by the minister in a statement, whose date happens to coincide with the three-year anniversary of the referendum vote in Crimea on March 16, 2014 to secede from Ukraine and rejoin the Russian Federation.

The referendum vote passed by a very high margin and subsequent polling has shown very high satisfaction rates with the decision among Crimeans of Russian and Ukrainian descent. Though little direct polling of Crimean Tatars has been conducted, one end-2014 poll found majority satisfaction among them.

A more recent survey among Crimean Tatars conducted by Russia’s Federal Agency for Nationalities during December 2016 and January 2017 showed that 61 per cent of Tatars in Crimea don’t approve the policies of Kyiv and 71 per cent oppose the blockade of Crimea by Ukraine. Only 13 per cent support the government in Kyiv. Seventy five per cent of respondents reported being satisfied with their lives.

At least 15 Tatars and pro-Ukraine activists have been kidnapped or gone missing. One of them was found dead from possible torture and another allegedly hanged himself in a desolate barn.

Few of the accusations listed by the minister and the reporter can be verified because they are unsourced. But two accusations can be examined, and they are false.

In the case of “closed down media outlets”, the accusation is likely referring to the closure of the Tatar-language ATR television and radio network in April 2015. That was a political decision by the anti-Russia owner of the network. He chose not to renew his broadcast license and he then turned that into a ‘censorship’ scandal. That story is told in an article by this writer in my article dated April 7, 2015.

The other verifiable accusation concerns this claim by the Globe reporter: “An estimated 20,000 Tatars have left Crimea since Russia annexed the Black Sea peninsula.”

In September 2015, Vice Prime Minister of the Republic of Crimea Ruslan Balbec released statistics about the departure and subsequent return to the Crimean Peninsula of the Crimean Tatar population. According to him, between 600 and 800 Crimean Tatars left Crimea after the 2014 decision to rejoin the Russian Federation. This included Crimean Tatar students at Ukrainian universities who wanted to finish their education programmes. By the spring of 2015, reported Balbec, about half of those who left had returned and more were on the way.

The figure of ‘20,000’ Tatar exiles in Ukraine was recently repeated by Mustafa Dzhemilev (weblink to Russian-language media report here). He is a Crimean Tatar and appointed member of the Verkhovna Rada in Kyiv on the slate of President Petro Poroshenko’s political machine.[1] A much lower figure is cited by Eskender Bilyalov, a member of the Russian presidential council on inter-ethnic relations and head of the Crimean Tatar organization ‘Inkishaf’.

As reported in the Politnavigator.net on March 15, 2017, Bilyalov told the all-Russia, Tatar-language television channel Millet (launched in 2015, broadcasting to all of Russia from Crimea) that the figure of 20,000 Crimean Tatars leaving for Ukraine after the reunification of the peninsula with Russia is a lie. “When they say that some 20,000 Crimean Tatars left for Ukraine, they are manipulating facts. At most, 3,000 to 4,000 left, and half of those were students who had to finish their studies [in Ukrainian universities which they had entered prior to 2014].”

Balbec’s or Bilyalov’s statistics would not surprise anyone who, unlike the Globe and Mail, has traveled to Crimea and Ukraine since the 2014 decision and listened with an open mind to the views of people living there.

Ukraine-controlled Crimea was officially unilingual, even though the majority of the population of 2.3 million are of Russian language and origin while some 275,000 (12 per cent) are of Tatar language and origin. Today’s Republic of Crimea recognizes three official languages–Russian, Ukrainian and Tatar. The government provides resources for schools and social services in the official languages. In the days of Ukraine-controlled Crimea, the number of Ukrainian language schools could be counted on one hand, while Tatar language schooling was barely on the radar.

Soon after the reunification with Russia, the Russian government in the person of President Vladimir Putin issued a sweeping decree reaffirming and expanding the official apology issued in Soviet times for the World War Two-era deportation of Crimea Tatars. The 2014 decree reaffirmed the right of return of Crimean Tatars to their shared homeland. Putin announced at the time, “I have signed a decree to rehabilitate the Crimean Tatar population, the Armenian population, Germans, Greeks – all those who suffered (in Crimea) during Stalin’s repressions.”

The announcement was made to a meeting of Russia’s State Council and was shown live on state television. Putin called for measures to encourage the “national, cultural and spiritual renaissance” of the minority groups. The decree aims, “to restore historical justice and remove the consequences of the illegal deportation (of the groups) and the violations of their rights”. 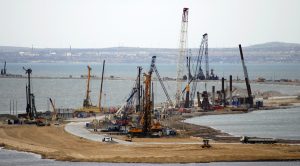 Construction of bridge to Crimea as viewed from Russian mainland (Andrew Osborn, Reuters)

Ukraine’s economy collapsed following the February 2014 coup that overthrew the elected president Victor Yanukovych, so resources and employment prospects for newly settled people are few and far between.

Hundreds of thousands of people have been forced from their homes in eastern Ukraine by the civil war launched there by the Kyiv regime in 2014. Unlike those who relocated to Russia, most of those who relocated in Ukraine are living in harsh conditions, including facing social stigmas from sections of the Ukrainian population that want them to ‘go home’. In today’s ultra-nationalist Ukraine, people from the ethnically Russian east of the country are often not welcome. Derogatory terms such as ‘sovok’ (derived from the word ‘soviet’) are thrown at them.

All this is not to say that life in Crimea today is idyllic. The peninsula is blockaded by Ukraine (a fact entirely unmentioned by anti-Russia Western media reporting). To counter that, a road, rail and energy bridge from Russia to Crimea is being constructed across the Kerch Straight, but it will not be completed until early 2019. More importantly, harmful, are the Western economic sanctions directed against Crimea and its people. So there are shortages of goods, sometimes there are electricity cuts, and economic activity is hampered.

Tatars have complained that restoration of property rights and promised expansion of cultural and political rights are not happening fast enough. For example, when the scandal over the ATR network erupted in March-April 2015, the Tatar ‘Milli Firqa’ political organization reminded the Crimean government that soon after the referendum, it had urged the creation of a publicly-owned, Tatar-language media network. Milli Firqua said the ATR ‘scandal’ would be moot if the government had acted on its recommendation.

But on the positive side, tourism, for one, is recovering, including from tourists and other visitors from Ukraine. Many Ukrainian visitors are in Crimea to avoid Ukraine’s compulsory military conscription, which was re-introduced in 2014 by the post-coup governing regime.[2] The gains in tourism visits are welcome because the withdrawal of Western credit card companies in 2014 caused several years of hardship for the industry.

Compared to the economic and violent, war-wracked disaster that Ukraine has become, including the prominent role that extreme-right paramilitaries and political movements play in government decisions there (another fact scrubbed out of Western media reporting), life prospects in Crimea look quite good. But don’t look in the Globe and Mail or in Minister Freeland’s press releases for that sort of news.

A resolution of the conflict over Crimea is available. It is called the United Nations Charter, article one of which, titled ‘Purpose and Principles’, reads, “To develop friendly relations among nations based on respect for the principle of equal rights and self-determination of peoples, and to take other appropriate measures to strengthen universal peace…” By any reasonable measure, the March 16, 2014 referendum vote in Crimea was an act of political self-determination, duly conducted by the constitutional government of the Autonomous Republic of Crimea (as the peninsula was titled under Ukraine). The overwhelming vote in favour of reunification with Russia was entirely consistent with Crimea’s history and the Western world should respect the result.

As to the the civil war in eastern Ukraine, here, too, an easy remedy is available, in the form of the Minsk-2 ceasefire agreement (text here). What is galling about the fate of this agreement is that even though the governing regime in Kyiv signed onto it, even though the governments of France and Germany signed on as guarantors, and even though it was endorsed by no less than the UN Security Council (on Feb 17, 2015), Kyiv has flaunted the agreement with impunity. It has pummeled the autonomous republics of Donetsk and Lugansk with artillery and has constantly threatened to re-launch an invasion. At the outset of the conflict, Kyiv cut social security payments–including the pensions that people had worked all their lives to earn–to residents of the areas of Donbass outside of its control and it has made travel difficult and dangerous across the conflict line of demarcation in Donetsk and Lugansk. Most recently, Kyiv has rendered official a transport blockade initially mounted by right-wing, Ukrainian paramilitaries. This is another sign of the inordinate influence of the right-wing extremists in Ukraine, yet Western media insists such influence is marginal.

Notes:
[1] Mustafa Dzhemilev has been a spokesman for nearly three decades of the Tatar Crimean Mejlis, a political advocacy project for Crimean Tatars that was launched in the early 1990s at the time of the breakup of the Soviet Union. By the time of the 2014 secession from Ukraine, the Mejlis role had been supplanted by newer and more representative Tatar organizations. The remnants of the Mejlis supported the transport and electricity blockade of Crimea that was mounted by Ukrainian extremists in the autumn of 2015 and then endorsed by the Kyiv regime.

[2] An interesting article published on March 4, 2017 examines prospects for a tourism project that would showcase Russia’s Republic of Tatarstan (located some 500 km east of Moscow). The article also looks briefly at tourism prospects in Crimea. An article on April 29, 2016 reported on a conference in Crimea discussing tourism potential for the Russian republic.

Roger Annis is an editor at New Cold War.org. He can be reached at the website email address or at [email protected]