We’ve just signed the world’s biggest trade deal, but what exactly is the RCEP?

India left negotiations in November 2019, but even so, the deal will cover one third of the world’s population and economy.

India left negotiations in November 2019, but even so, the deal will cover one third of the world’s population and economy.

Australia and the other governments refused to release the text until after signing, continuing Australia’s regrettable secrecy about deals it is about to sign.

India left the RCEP because of concerns about its potentially negative impact on local industry development.

Since Australia already has free trade agreements with all of the remaining members, India’s absence significantly diminishes what might have been in it for Australian exporters.

What’s left are some agreements on common standards and the claimed ability for Australia to talk to China more than it can through its own one-on-one trade agreement.

The text was completed before the pandemic and has not been revised since.

As it happened, Australia took actions during the pandemic that were technically contrary to the rules embodied in the RCEP in order to boost local manufacturing capacity for essential products.

The prime minister has since announced longer term local industry support and the trade minister has said that the challenge for the future is about getting “the balance right”.

But the rules signed up to on Sunday will integrate Australia further into regional production chains and commit Australia to avoid assistance for local industries of the kind that will arguably be needed to rebuild and strengthen the economy.

Other rules signed up to on Sunday open essential services such as health, education, water, energy, telecommunications, finance and digital trade to foreign investors and restrict the ability of governments to regulate them in the public interest. 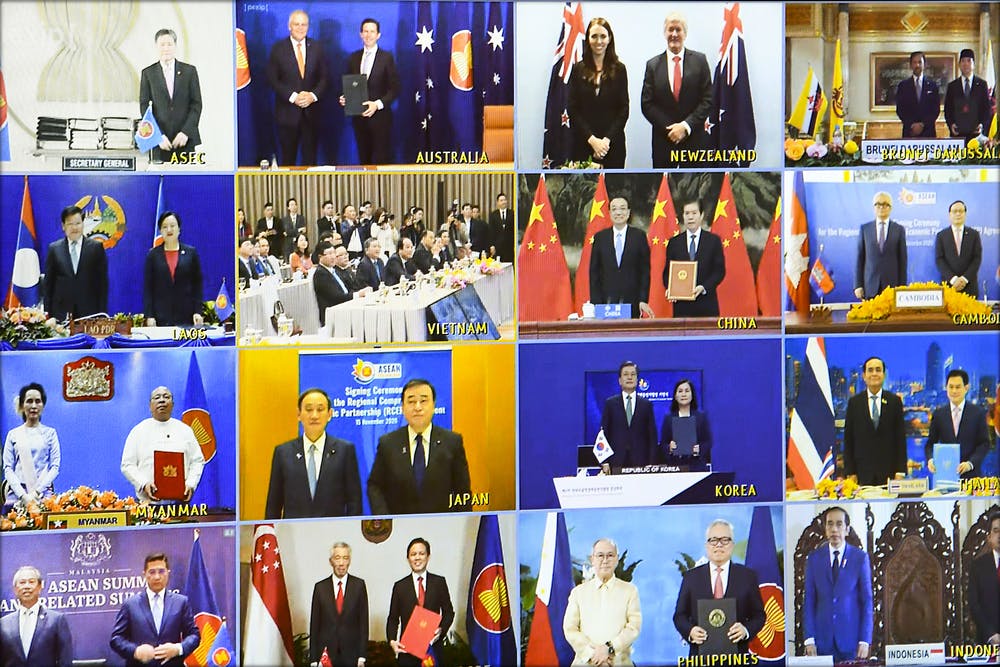 Oddly for an agreement dealing with standards, there’s nothing in it about forced labour or child labour, and no mention of climate change.

Its members include countries like China and Myanmar in which there is mounting evidence of labour rights and human rights abuses.

But there are also welcome omissions.

No further rights for foreign investors

The final text confers no special rights on foreign corporations to sue governments through what are known as Investor-State Dispute Settlement clauses common in other agreements, although there is an opportunity for the members to revisit the idea two years after ratification

The RCEP will be reviewed by a parliamentary committee which, as is usual in these agreements, will be unable to change the text.

The Coalition has a majority on that committee.

Some commentators see the RCEP through the lens of US-China competition..

Looked at this way, the US has been weakened by the Trump administration’s decision to pull out of the original Trans Pacific Partnership.

It is argued that the RCEP is China’s creation, and the incoming Biden administration will need to counter it by re-joining the revised Trans-Pacific Partnership, which excludes China.

But this is a US-centric a view that downplays the leading role of the ASEAN countries in creating the RCEP.

A Biden administration is unlikely to re-join the Trans Pacific Partnership any time soon. Parts of the Democratic party remain strongly opposed to it.

The US will rejoin genuinely multilateral organisations such as the World Health Organisation and the Paris Climate Agreement.

But Biden’s trade policy is likely to focus on domestic priorities such as the pandemic and climate change, about which the RCEP says nothing.

She was formerly a Senior Research Fellow at the University of New South Wales, and has also worked for community organisations and unions.

She has published widely on the social impacts of globalisation and trade agreements. Her publications range from books, refereed journal articles and book chapters to submissions to parliamentary inquiries and opinion pieces in newspapers and on websites.

Current research interests include the Trans-Pacific Partnership Agreement, the Regional Comprehensive Economic Partnership and other bilateral and regional trade agreements in the Asia-Pacific region, and Investor-State Dispute Settlement .