Interview by Gregory Wilpert with Michael Hudson, broadcast on The Real News Network, June 24, 2016  (transcript below) 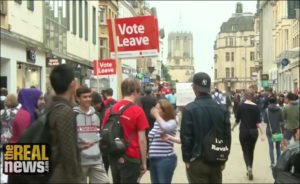 Michael Hudson argues that military interventions in the Middle East created refugee streams to Europe that were in turn used by the anti-immigrant right to stir up xenophobia.

GREGORY WILPERT: Britain’s referendum in favor of leaving, or exiting, the European Union, the Brexit referendum, as the results are known, won with 52 per cent of the vote on Thursday, June 23, stunning Europe’s political establishment. One of the issues that has raised concern for many is that what does the Brexit mean for Britain’s and Europe’s economy and politics? This was one of the main topics leading up to the referendum, but a lot of disinformation reigned in the discussion. With us to discuss the economic and political context of the Brexit is Michael Hudson. He is a research professor of economics at the University of Missouri-Kansas City, and author of Killing the Host: How Financial Parasites and Debt Destroy the Global Economy. He is an economics adviser to several governments, including Greece, Iceland, Latvia, and China. He joins us right now from New York City.

So let’s begin with the political context in which the Brexit vote took place. Aside from the right-wing arguments about immigrants, economic concerns, and about Britain’s ability to control its own economy, what would you say–what do you see as being the main kind of political background in which this vote took place?

The problem began in Libya. Once Hillary pushed Obama to destroy Libya and wipe out the stable government there, she wiped out the arms–and Libya was a very heavily armed country. She turned over the arms to ISIS, to Al-Nusra, and Al-Qaeda. And Al-Qaeda used these arms under U.S. organization to attack Syria and Iraq. Now, the Syrian population, the Iraqi population, have no choice but to either emigrate or get killed.

So when people talk about the immigration to Europe, the Europeans, the French, the Dutch, the English, they’re all aware of the fact that this is the fact that Brussels is really NATO, and NATO is really run by Washington, and that it’s America’s new Cold War against Russia that’s been spurring all of this demographic dislocation that’s spreading into England, spreading into Europe, and is destabilizing things.

So what you’re seeing with the Brexit is the result of the Obama administration’s pro-war, new Cold War policy. 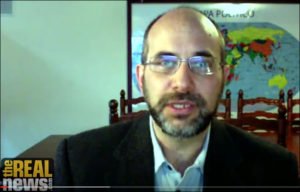 HUDSON: It’s a combination. The right wing was, indeed, pushing the immigrant issue, saying wait a minute, they’re threatening our jobs. But the left wing was just as vocal, and the left wing was saying, why are these immigrants coming here? They’re coming here because of Europe’s support of NATO, and NATOs war that’s bombing the near East, that is destabilizing the whole Near East, and causing a flight of refugees not only from Syria but also from Ukraine. In England, many of the so-called Polish plumbers that came years ago have now gone back to Poland, because that country’s recovered.

But now the worry is that a whole new wave of Ukrainians [are coming]. Basically, the U.S. policy is one of destabilization, so even the right-wing, while they have talked about immigrants, have also denounced the fact that the European policy is run by the United States. You have Marine Le Pen in France saying we want to withdraw from NATO, we don’t want confrontation with Russia. You have the left wing in England saying, we don’t want concentration in Russia. And last week when I was in Germany, you had the Social Democratic Party leaders saying that Russia should be invited back into the G8, that NATO was taking a warlike position hurting the European economy by breaking its ties with Russia and by forcing other sanctions against Russia.

So you have a convergence between the left and the right, and the question is, who is going to determine the terms on which Europe is broken up and put back together? Will it simply be the right wing that is anti-immigrant? Or will it simply be the left saying we want to restructure the economy in a way that essentially avoids the austerity that is coming from Brussels, on the one hand, and from the British Conservative Party on the other.

So the whole withdrawal from Europe means withdrawing from austerity. If you look at the voting pattern in London, in England, you had London to stay in. You had the university centers, Oxford and Cambridge, voting to stay in. You had the working class, the old industrial areas of the north and the south, you had the middle class and the industrial class saying, ‘We’re getting a really bad deal from Europe. We want to oppose austerity. And we don’t want Brussels to give us not only the anti-labor, pro-bank policies, but also the trade policy that Brussels was trying to push onto Europe, the Obama trade agreement that essentially would take national economic policy out of the hands of government and put it into the hands of corporate bureaucracy, corporation courts.’ They are saying the bureaucracy in Brussels is largely pro-bank, pro-corporate, and anti-labor.

WILPERT: That actually brings up the issue of the Transatlantic Trade and Investment Partnership, or the TTIP. It was one of the things that the Cameron government was really pushing for, this relationship between the European Union and the United States. Now that Britain is presumably going to be leaving the European Union, don’t you think that this might open the possibility of just a TTIP between Britain and the United States? In other words, that it will–it has been one of the arguments, actually, of those who were opposed to Britain leaving the EU, that it will tie Britain even closer to the United States than it was before, and by virtue of the fact that it’s leaving Europe.

HUDSON: I think just the opposite. I’ve gotten phone calls today from Britain, and I’ve been on radio with Britain. The whole feeling is that this makes the TTIP impossible, because you can’t do a TTIP just with Britain. You have to do it with all of Europe. [Brexit] prevents Europe, and I think Britain, too, from making this kind of trade policy. The rejection of eurozone austerity is, essentially, a rejection of the neoliberal plan that the TTIP is supposed to be the capstone of.

WILPERT: What do you think this means, then, in general for Europe’s future? One of the things that–one of the dangers that many perceive is precisely that Europe, as a European Union, is going to fall apart. Do you think that’s the likely scenario here?

HUDSON: I watched Marine Le Pen today in France, and you could see from her face that she was overjoyed. She thinks… there was such unleashing of a feeling of freedom, a feeling of ‘yes, we can do it’. When Ireland voted not to join the European Union, people just ignored the popular vote. But now it can’t be ignored anymore.

I think that the British vote is a catalyst for moves in Spain, Italy, the Five Star movement in Italy, the Podemos in Spain, to say, ‘We have an alternative to Europe.’ Europe is sort of like the Soviet Union in the ’30s and ’40s. There was an argument–is it reformable or not? There is a feeling, and I think it’s correct, that the European Union, the eurozone, and the euro, is not reformable, as a result of the Lisbon treaties and the other treaties that have created the euro. Europe has to be taken apart in order to be put together not on a right-wing, neoliberal basis but on a more social basis.

Now, ironically, the parties who call themselves socialists are now moved to the ultra-right, to the neoliberal side. The French socialists, the German social democrats. But you’re having real radical parties arise in Italy, Spain, Portugal, and potentially in Greece, again, that are going to say, well, the key of any government, of any national government, has to be the ability to issue our own money, to run a deficit, spending into the economy to make the economy recover. We cannot recover under the Lisbon agreements, under the eurozone, where the central bank will only create money to give to banks, not money to spend into the economy, to actually finance new investment and new employment. And we cannot be part of a eurozone that insists that pensions have to be cut back in order to make the banks whole and save the one percent losing money.

So you could say that the vote to withdraw from Europe is really a vote of the British middle class, the working class, to withdraw from the U.S. neoliberalism that has been running Europe for the last ten years.

This is an edited transcript of the interview on The Real News Network. 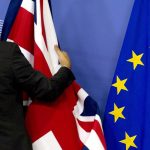 Brexit is only the latest proof of the insularity and failure of Western establishment institutionsEurope - West, Media critique 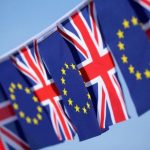