Western media sees nothing, but food blockade against Crimea is real and ongoing

Just because you didn’t read about it in Western mainstream media doesn’t mean a food blockade against Crimea and threats to people traveling to there from Ukraine are not happening.

Conveniently unreported by Western media is the ongoing food transport blockade against the people of Crimea. It is being waged by extreme-right forces of Ukraine with the blessing of the NATO/EU-backed regime in Kyiv and its police and border officials. 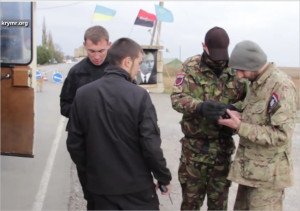 The blockade began on September 20 at the three road crossings from Ukraine into Crimea. It was mentioned for a brief time in Western press, which called it an initiative of “Crimean Tatars”. This was false and misleading. Here is an example in Reuters of blatantly false reporting, dated September 20. Reuters went so far as to headline its article ‘Tatar activists block roads into Russia-annexed Crimea’.

The ‘Tatar’ claim was based on the fact that a few Tatar figures appointed years ago as deputies to the Ukrainian Rada called for a blockade. Refat Chubarov and Mustafa Dzhemilev threw in their lot with the Maidan movement at its outset in 2013 and they have urged a blockade of Crimea ever since a large majority of Crimeans voted in March 2014 to secede from Ukraine.

This recent video report (or click screen below) shows the blockade in action, and there is no doubt who is waging it–the extreme right of Ukraine. What we see in the short video, dating from October 28, are vigilantes of the neo-Nazi ‘Right Sector’ and ‘Azov Battalion’ stopping civilian vehicles en route to Crimea. They check papers and temporarily detain a young man suspected of being a “separatist”. They check his name against a list of ‘separatists’ in their own database. 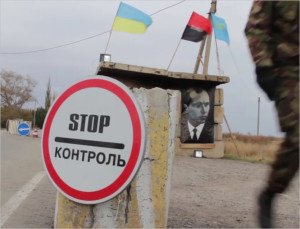 Prominently featured at the vigilante checkpoint is an image of the notorious WW2 Nazi collaborator Stepan Bandera (see photo).

Who controls Ukraine’s borders? The national government? Along the Ukraine-Crimea border, it is extremist vigilantes who control it, with the full connivance of Ukrainian government authorities. You did not read this in the pages of the New York Times, Guardian or Globe and Mail.

Enclosed below are news articles reporting on the ongoing food blockade against the Crimean people. One article reports on the attempts of Ukrainian people in the region bordering Crimea to end the blockade because it is harming local farmers and truckers. A planned protest by Ukrainians against the blockade on October 28, including by residents of the nearby city of Kherson, was called off because of threats and intimidation by the right-wing vigilantes.

Another article reports on a recent visit to Crimea of the head of Federation of Crimean Tatar Communities of Turkey. He compares the actions of Ukrainian extreme rightists against Crimea to the actions of ISIS extremists in Syria.

Recall that Ukraine has cut water supply to Crimea and has interrupted electricity supply at times to the region. You didn’t read that in reports by Western media or human rights agencies.

Crimean prosecutor-general: Everyone involved in blockade of Crimea will be punished

1. SIMFEROPOL, Crimea–The prosecutor-general of Crimea, Natalya Poklonskaya, promises to bring all persons involved in restriction of the rights and freedoms of Crimeans to account. 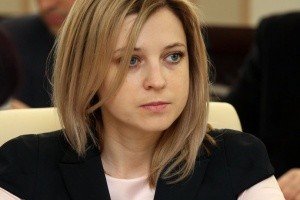 “Proceedings will be made against everyone making acts against the rights and freedoms of our citizens, against the interests of our state and the republic and who violate current legislation requirements.

“[Lenur] Islyamov is not an exception,” declared Poklonskaya, referring to the Russian businessman and former media mogul who is now living in Ukraine.

“They will be brought to justice according to the law”, Poklonskaya was cited in a report by RIA Novosti.

2. SIMFEROPOL, Crimea– The Investigative Department of Russia’s FSB Office in the Republic of Crimea and city of Sevastopol has brought a criminal case against Lenur Islyamov, one of initiators of the blockade of the peninsula.

The article under which the criminal case has been brought is undisclosed.

The cessation of food deliveries to Crimea was initiated by a call by Refat Chybarov and Moustafa Djemilev, deputies in the Ukrainian Rada, and enforced by the Right Sector, a Ukrainian nationalist organization. It began at noon on September 20.

Traffic of cargo vehicles from Ukraine to Crimea is currently suspended at all three checkpoints.

SIMFEROPOL—Searches are taking place in Crimea at the enterprises of one of the organizers of the so-called blockade of the peninsula, Lenur Islyamov, the press service of the regional department of the Russian Federal Security Service (FSB) told TASS.

“All necessary investigative operations are underway within the framework of a criminal case against Islyamov, including searches,” the press service said.

Islyamov, who is currently in Ukraine, controls in Crimea the SimCityTrans transportation company and the ATR TV channel. Earlier this year, ATR broadcasting was halted after the company refused to apply to renew its broadcast license.

The FSB announced earlier that a criminal case had been opened against Islyamov, who is a former deputy prime minister of Crimea. The agency did not specify the article of the criminal case, adding that Islyamov was a Russian citizen.

Crimea’s Prosecutor-General Natalya Poklonskaya earlier told reporters that the republic’s law enforcement agencies were taking action against all organizers of the blockade.

“These are people who violate the law against everyone. Checks are being conducted, in particular, regarding electricity transmission tower explosions and attempts to extort money from vehicle drivers trying to come to Crimea and exercising their right to freedom of movement” Poklonskaya said.

Rally against food blockade of Crimea planned for today in Ukraine

The rally is scheduled to begin at 10 am. According to Muzhdabayev, taxi drivers and entrepreneurs of the Genichesk raion suffering losses due to the food blockade of the peninsula are expected to take part in it. He said that Seytumer Nimetullayev, the Qirim Birligi Tatar Crimean civil society organization leader, is the rally initiator.

We remind, freezing food delivery to Crimea was initiated by People’s Deputies Refat Chybarov and Moustafa Djemilev and upheld by Right Sector, a Ukrainian nationalist organization. It began at noon on September 20. Cargo vehicles traffic from Ukraine to Crimea has been suspended at all three checkpoints.

A pro-Kyiv media outlet in Ukraine has broadcast a video report on the one-month long blockade of Crimea’s border: http://uatoday.tv/society/crimea-516013.html.

SIMFEROPOL–The head of the Federation of Crimean Tatar Communities of Turkey, Unver Sel, told journalists here on Thursday that Ukraine’s blockade of Crimea could be compared to the Islamic State’s actions in Syria.

He said that the Federation was deeply concerned with a rift between Russia and Ukraine.

The events that are taking place in Crimea are almost similar to what is happening on the Turkish border with Syria, Uver Sel told a news conference.

“The actions of radical Islamist groups and the blockade of Crimea imposed by Ukraine’s extremist Right Sector movement are a source of great concern for us. We do not wish to see this happening,” the head of the Federation of Crimean Tatar Communities of Turkey said.

A group of deputies of Ukraine’s Verkhovna Rada (parliament) and the leaders of the Crimean Tatar Mejiis, which is unregistered in Russia, Mustafa Dzhemilev and Refat Chubarov, imposed a trade blockade on Crimea on September 20. Activists of the extremist Right Sector movement joined the blockade later. They have been banning trucks with Ukrainian goods from entering Crimea for more than a month.

“The population of Ukraine’s Kherson region was the worst hit. They used to cultivate products sold in Crimea. Now they are poverty-stricken.

“They wanted to hold a rally against the Right Sector and its lawless behavior yesterday. But they started receiving threats. The Right Sector activists went from house to house threatening the local people’s families and children.

“The people could not express their opinion. Now, everybody there is living in fear,” Seytumer Nimetullayev, the leader of a Crimean Tatar public organization, told journalists on Thursday.

Crimea’s Prosecutor Natalya Poklonskaya said that Crimean law enforcers were studying the activities of those who had imposed a blockade on the peninsula, including their actions to disrupt free movement of people across the border with Crimea.

They have also launched probes into attempts to blow up the supports of the power transmission lines leading to Crimea.