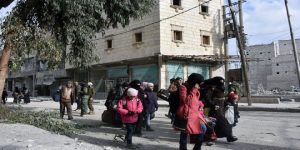 Enclosed are two news reports from RT.com reporting on the liberation of Aleppo, Syria from the grip of the right-wing terrorists that have occupied the east of the city for the past five years. Also enclosed is a report from the Syrian Arab News Agency reporting on the tens of thousands of civilians who have been successfully evacuated from eastern Aleppo in recent weeks and resettled in temporary humanitarian centers.

Introduction by New Cold War.org:
In recent days, Western news media has been reporting the defeat of right-wing terrorist forces occupying eastern Aleppo city as being a terrible disaster. News reports are filled with grim imaginings of the fate of the citizens of eastern Aleppo now that their “rebel” protectors no longer hold them hostage.

Not a word is reported of the massive effort underway in Aleppo by the Syrian government and civil agencies, and foreign agencies, notably the militaries of Russia and Iran, to rescue civilians from their captors and provide emergency aid and shelter. Several tens of thousands of residents have moved to emergency shelters so they may more easily be cared for. This follows weeks and months of the ‘rebels’ of eastern Aleppo shooting and otherwise blocking civilians from taking advantage of the humanitarian exit corridors created by Syria and its Russian ally.

The lamenting and caterwalling—let’s call it by its proper name–by Western media is reaching new heights on December 13 with wall-to-wall reporting of alleged widespread, relentless shelling and summary executions (“in their own homes”) of citizens of eastern Aleppo by Syrian army forces. Here is one example of the tidal wave of such crazed reporting, by reporter Margaret Evans of Canada’s state broadcaster, the CBC.

Evans has reported directly from Aleppo in recent weeks. Her December 13 report describes the fall of the terrorist enclave in eastern Aleppo as a “shocking, jarring turn of events”. Actually, the impending liberation of Aleppo has been evident for some weeks, as Evans will no doubt be fully aware, even if she chooses to report it as a “shocking” surprise.

The CBC reporter shields readers from the widespread efforts taking place to rescue civilians from the grip of Western-backed terrorists and provide care and comfort. And from news of the many reconciliation agreements that have been reached this year between the Syrian government and residents of areas freed by the Syrian army. The reconciliation process by the Syrian government is sincere and ongoing. But no, Evans and the CBC are reporting only relentless and apparently senseless bombing, shelling and summary executions of civilians. Her source for the claims? None is needed. Her reports have pounded home this message for weeks, ergo words become truth.

Evans wants something to be done by the West to save the defenseless civilians of eastern Aleppo. “The silence of those countries supporting various opposition groups in their fight against the Assad regime — from jihadists, to those described as moderate [!]— speaks volumes,” she laments.

A professor in London speaks the terrible, upsetting truth to Evans, which she cites: “Now, more and more people are saying [Assad] has won. The Russians are saying ‘he has won, now let’s make a deal.’ And the reality is that’s why the choices facing the rebels after Aleppo are existential. Because they cannot go on after this.

To which Evans adds, in the final sentence of her report: “So, too, are those powers arrayed against Assad and his Russian backers.”

(For further example of CBC News in action, listen to the lead item, on the situation in Syria, here in the weekday, Canada-wide, evening radio broadcast ‘The World At Six’ for Dec 13, 2016. We hear in the broadcast that a host of evils awaits the beleaguered people of eastern Aleppo due to the defeat of the Western-sponsored occupying forces, perhaps even “genocide”, in the words of one resident  interviewed.

Meanwhile, The Independent in the UK publishes a hysterical report on Dec 13 titled ‘Aleppo’s civilians ‘massacred’ as Assad forces take back city’. In the report, we read, “Unconfirmed [emphasis added] reports from overnight on Monday also suggested that at least 79 civilians, including women and boys, had been lined up against walls by pro-government militias and shot in the neighbourhoods of Fardous and Saliheen.”

Western news agencies, including the CBC, are now reporting on December 13 that a ceasefire agreement has been reached between the Syrian government and the remaining, militarily-doomed forces occupying eastern Aleppo.

The videos of alleged ‘Russia’s shelling and executions’ [in eastern Aleppo] as well as other similar footage are fake and were shot by the militants themselves, said Major General Igor Konashenkov, the Russian Defense Ministry spokesman.

“All of the statements by high-ranked Western officials, which cite so-called ‘reports by the activists,’ as well as ‘flicks,’ showing alleged ‘Russian bombardments,’ ‘executions’ and other stuff are staged videos, produced by special film crews formed by militants,” Konashenkov said in a statement Tuesday.

The spokesman said that “it remains a question, why some media outlets were so eager to use them without checking.”

“We have some advice for them – don’t ever fall for terrorist propaganda,” he added.

Konashenkov also rejected Western media claims that 250,000 civilians were trapped in eastern Aleppo and endangered by the government’s offensive on the militants. “The Syrian troops’ operation to liberate the eastern parts of Aleppo is successful and humane in every sense in regard to civilians,” he said.

“All the dramatized screams, allegedly in defense of ‘250,000’ Aleppo civilians, who were ‘left under siege,’ mainly on the part of certain representatives of the British and French leadership, are no more than just empty Russophobic rhetoric,” spokesman added.

According to Konashenkov, the militants in eastern Aleppo had used around 100,000 people as human shields, who are now out of harm’s way. “At the very first opportunity, [people] left that enclave and moved to the Syrian government-controlled districts for safety, real aid and food,” he said.

With most of eastern Aleppo now liberated, more facts about the shocking conditions which civilians endured under the militants are being revealed.

“The inspections carried out by Russian mine clearance specialists in eastern Aleppo didn’t reveal a single school or hospital that had been functioning for its true purposes under the terrorists. All of them were used as command centers, Sharia courts, terrorist rallying points, ammunition depots and underground production centers for manufacturing homemade rockets,” the spokesman said.

Konashenkov also said that “no human rights activists, representatives of the ‘opposition’ or nongovernmental humanitarian organizations, like the White Helmets, have been found in eastern Aleppo.”

“According to civilians, there was only hunger and indiscriminate terror by militants for any attempts to express dissatisfaction or leave the enclave,” he said.

Aleppo has been divided between the government forces and the militants since the start of the Syrian conflict in 2011. However, in recent weeks, the Syrian Army has made significant gains in eastern Aleppo and is close to liberating it from the militants.

The successful offensive allowed thousands of people to flee the area are receive humanitarian assistance from the Russian and Syrian military.

Russia is weary of the Obama administration’s ever-shifting approach towards the situation Aleppo, Foreign Minister Sergey Lavrov has said. He added that the hostilities in the Syrian city would have stopped long ago if the U.S. didn’t just sit idle.

“We are tired of hearing the lamentations of our American colleagues from the current administration that the hostilities [in Aleppo] should stop and that Russians are willing to do so only after having an agreement on corridors [for opposition fighters to leave],” Lavrov told a news conference in Serbia.

He said the U.S. had had plenty of time since September, when a ceasefire deal for Aleppo was agreed, to prepare the evacuation of armed opposition groups from the eastern part of the city. “Instead of doing this work, they call on us every day to stop combat action, call on the Syrian Army to do the same, and do nothing themselves. They didn’t lift a finger to separate ‘their moderates’ from terrorists,” the Russian minister said.

The separation of groups willing to seek a peace transition in Syria from extremists not supporting this goal was the task that U.S. was supposed to perform under the September deal. Russia has repeatedly accused Washington of failing to deliver and of possibly never even intending to do so.

Lavrov also denied allegations that Russia was an accomplice to war crimes and was preventing delivery of humanitarian aid to Aleppo. The accusations were voiced by a group of six nations – Britain, Canada, France, Germany, Italy and the US – in a joint statement last Wednesday. [Report here.] “This is not true. Speaking very mildly, not true,” the minister said.

He added that the Western nations were probably motivated to voice such accusations by feelings of “despair and impotence” in dealing with the armed groups in Syria, which these countries helped to strengthen.

“They hoped that they can cooperate with extremists as long as they have a common goal – to oust the regime of [Syrian President] Bashar Assad. And after reaching this goal they expected they would be able to get rid of those extremist organizations too. It doesn’t work this way, and our Western partners walked into the same trap on many occasions,” Lavrov said.

The Russian criticisms come as the Syrian Army is about to take full control of Aleppo, one of Syria’s largest cities, which has been divided for years between pro-Damascus forces and various armed groups seeking to topple the Assad government.

ALEPPO – Three thousand civilians who had been besieged by terrorist organizations have got out from the eastern neighborhoods of Aleppo city through humanitarian corridors set by the Syrian Army in cooperation with the Russian side. A SANA reporter in Aleppo said that the civilians’ exit started today at dawn and is continuous, adding that army units and concerned authorities are transferring them to makeshift centers in Jibrin and providing them with the requirements of residence in the centers.

In the same context, the Russian coordination center in Hmeimim pointed out that 7796 persons, including 3946 children, got out from the eastern neighborhoods during the past 24 hours.

In a statement, the Center stressed that 375 gunmen also gave up their weapons and turned themselves in to have their legal file settled due to the Amnesty Decree.

The statement clarified that since the beginning of the military operations, 110,000 civilians, including 44367 children, have been evacuated from the eastern neighborhoods, while more than 7000 people returned to their houses in the areas restored by the Army.