To all appearances, it has become a tradition for the leaders of the Ukrainian government to exhibit themselves as clowns in Europe. But German television has become their acme; once on it, they start bringing on unprecedented nonsense.

First it was Yatsenyuk four months ago, sitting in a puddle, telling Channel One about “the USSR’s invasion of Germany” during WW2. [Here.] Now Poroshenko, visiting Berlin May 13, has taken up the baton. 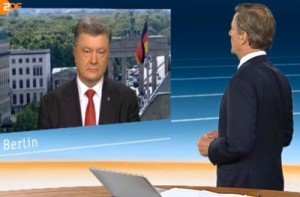 Petro Poroshenko on German television May 13, 2015

On that day, the Ukrainian president gave an interview to the German government-funded television station ZDF. The video is on the internet at the channel’s website, under the pathetic title ‘Poroshenko: We will fight to the last drop of blood’.

But don’t bother wasting seven minutes of your life watching the interview, to hear all over again the already stale moaning about “Russian troops” and the asseverations that “Ukraine is unfailingly sticking to the Minsk accords”. As has become clear, it is noisome not only to the sober-minded Poroshenko. It stretched the patience of the leading German TV channel. The interviewer was driven to interrupt the Ukrainian president’s inane tirade with, “But you, Mr. Poroshenko, yourself, poured gas on the fire when insisting [recently] that you want to capture Donetsk, and this statement has brought on strong irritation, even to the German government.”

At this, Poroshenko, managing the smile of an innocent child, answering, “I am very grateful to you for this comment, but I would simply wish to advise you not to read the Russian newspapers. They are the only source where you can find such nonsense. I am the president of peace, and Ukraine is a solid supporter of the Minsk accords. We withdrew our weaponry and we do not see a resolution of the conflict by means of arms.”

However, the German interviewer was unconvinced and did not let him off: “In the West, not everyone believes that you represent the ‘good side’. Ukraine is one of the most corrupt countries in the world, and in the matter of constitutional change, there is no progress in sight.  In Kiev, they speak the language of hardline nationalism. When will it stop?”

Poroshenko’s answer was without thought, as empty as the earlier replica and consisted of the tirade about the “decisive struggle with corruption” etc, etc.

In this connection, the interesting thing is less the words of Poroshenko than the position of the German state television, reflecting, of course, the interests of the state leadership. The interviewer’s questioning shows how much the view of the German government towards the leadership in Ukraine has changed in just a few months.

In closing, we cannot but ask the question, what about John Kerry, who, just two days before, referring to the words of President Poroshenko, warned him not to attack Donetsk. Does Poroshenko suppose that the U.S. Secretary of State also gets his information from the Russian newspapers? And what account does he make of the Federal Republic of Germany being “extremely irritated” at Poroshenko’s saying he intended to retake Donetsk? Does Frau Merkel herself begin her day by reading Konsomolskaya Pravda?

The monolithic front of the western press has begun to crack. The French press can’t be counted on, either, to mask the nature of Kiev’s government. From a video of Ukrainian PM Arseniy Yatsenyuk responding to reporters’ questions in Paris on May 13:

Question #1, by Frédéric Saillot for Eurasie Express (in English):  Mr. Yatsenyuk, when will you stop the genocide in Donbass?

Yatsenyuk: When Putin pulls back, implements the Minsk deals, and stops the violation of international law. And when Russia will be brought to justice.

Question #2. A French journalist (in English): What is your view of the talks on Ukraine that the Americans held with the Russians in Sochi yesterday?

Yatsenyuk: You know, I haven’t seen anything on CNN on the trip of Mr. John Kerry to Russia. My message is that Sochi is not the best resort in the world. The U.S. is effective and we strongly rely on our unity and the U.S. administration adamantly supporting Ukraine and supporting peace and stability, inducing Russia to support the peace deal and making Russia pull back its forces from Ukraine.

Question #3. Reply to a question from RFI (in Russian):

Yatsenyuk: The current concentration of forces raises the question of opportunity (sic) of renewed fighting and the duties of the entire free world to stop and to force Russia to respect the Minsk agreements it has also signed.