Political repression and violence are allegedly incompatible with Western liberal democratic values. Respect for human rights, freedom of expression, and protection of the rights of minorities are all purportedly the hallmarks of “free societies,” the goals toward which all nations should be striving. And yet, such standards of freedom and democracy are only selectively applied, and only when beneficial to the Western (US-UK-EU-NATO) agenda. 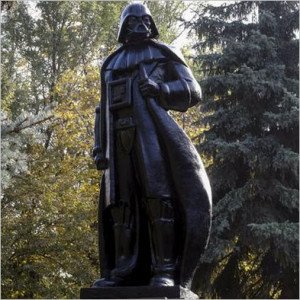 Western media and non-governmental organizations (NGOs) are quick to highlight abuses, both real and imagined, in countries where it is politically useful to do so, such as in North Korea, Venezuela, Iran, Russia, and China. However, when it comes to the US-EU project in Ukraine, magically the liberal democratic values and human rights are no longer of central importance. Indeed, were one to read the Western media coverage of Ukraine, not only is political repression and violence not concerning, it’s downright funny.

An article published in the exalted liberal pages of Britain’s The Guardian ran with the headline The force awakens (in Ukraine): Darth Vader statue replaces Lenin monument (23 October 2015). The story highlighted the transformation of a statue of Lenin in the city of Odessa, into the Star Wars villain Darth Vader by Ukrainian artist Alexander Milov. The lighthearted tone of the piece, with tongue-in-cheek references to “the Force” (a Star Wars plot point) of the WiFi being radiated from the statue’s head belies the seriousness of the issue – the intimidation and violent repression of political forces in the ‘New Ukraine’ – which the author conveniently downplays.

The story makes only passing mention of the “decommunization laws” – conspicuously referenced in parentheses with a hyperlink, as if they were an afterthought – under which this statue has now legally been defaced and destroyed. In fact, the “controversial decommunization laws” were not merely an attempt to erase the symbols of Soviet history, but part of a broader process of political repression that has included violence, kidnappings, and death. In fact, the appropriation of the Lenin statue is merely an outgrowth of the repeated attacks upon the Communist Party and its grassroots organizers all throughout Ukraine, as the pro-fascist government and police systematically attacked, and ultimately dissolved the entire Party which had been traditionally one of the most popular in the country.

In a grossly dishonest bit of writing, the author of the article noted that, “Darth Lenin is in a factory in the Black Sea port city, which has been the location of clashes between separatist and pro-Ukraine forces, and recently saw pro-western former Georgian leader Mikheil Saakashvili installed as governor of the region.” Note the twin distortions embedded in the excerpt.

First, describing the infamous May 2, 2014 massacre of leftist activists at the Trade Unions House in Odessa (which left at least 43 dead and remains the single most heinous act of repression since the war began) as “clashes,” is yet another attempt to whitewash the pogrom. Such language seeks to both obscure the fact that the fascists presented to western audiences as “nationalists” and “patriots” were little more than Nazi thugs, and to present the illusion of equivalence between the two sides. This was no clash, it was a one-sided slaughter. But by continuing to present the incident as “clashes,” The Guardian merely upholds the political and editorial line of the Western political establishment which desperately tries to justify its continued support for the oligarch-fascist government in Kiev.

Secondly, the author completely distorts the undemocratic, dare I say fascist, nature of the appointment of Mikheil Saakashvili as governor of Odessa. One sees here Saakashvili described as “pro-western” because, as The Guardian understands perfectly well, in the context of Ukraine and Russia, the term “pro-western” is supposed to be synonymous with goodness and justice, while “pro-Russian” is evil and sin; Russophobia is still deeply embedded in the collective psyche of Westerners.

Of course, the author fails to mention that Saakashvili is a fugitive from justice, having fled Georgia rather than face charges of corruption and human rights violations stemming from his brutal crackdown on political protesters while he was president. Unsurprisingly, there is no mention of the fact that Saakashvili, close friend and ally of George W. Bush, Dick Cheney, David Petraeus, John McCain and the entire neocon establishment, is directly responsible for egregious war crimes in Abkhazia and South Ossetia, namely unprovoked aggression which sparked the 2008 Russia-Georgia war.

Indeed, The Guardian itself reported back in 2009 on the EU-commissioned report into that war:

An investigation into last year’s Russia-Georgia war delivered a damning indictment of President Mikheil Saakashvili today, accusing Tbilisi of launching an indiscriminate artillery barrage on the city of Tskhinvali that started the war… the conclusions will discomfit the western-backed Georgian leader, Saakashvili, who was found to have started the war with the attack on Tskhinvali, the South Ossetian capital, on the night of 7 August last year, through a “penchant for acting in the heat of the moment”…The war started “with a massive Georgian artillery attack”, the report said, citing an order from Saakashvili that the offensive was aimed at halting Russian military units moving into South Ossetia…Flatly dismissing Saakashvili’s version, the report said: “There was no ongoing armed attack by Russia before the start of the Georgian operation … Georgian claims of a large-scale presence of Russian armed forces in South Ossetia prior to the Georgian offensive could not be substantiated … It could also not be verified that Russia was on the verge of such a major attack.”

So, it should not be a secret to anyone, least of all the staff at The Guardian, that Saakshvili is a war criminal who has simply not yet been convicted of his crimes. And yet, The Guardian thought it not worth commenting on, instead choosing to simply note that he is the “pro-western former Georgian leader.” Imagine referring to Chilean dictator Augusto Pinochet, guilty of having committed countless crimes including crimes against humanity, simply as the “pro-American former Chilean leader,” or Somoza as the “pro-American former Nicaraguan president.” It would be considered dishonest at best, downright contemptible at worst. And yet that is precisely how The Guardian presents Saakashvili, a man who is not even Ukrainian.

The only hint of criticism in the sentence is an implication, using the word “installed” to describe how Saakashvili came to power in Odessa. However, such an implication certainly does not do justice to the reality of the situation, one in which non-Ukrainians loyal to Washington and NATO are installed alongside Ukrainian quislings to do the bidding of the Kiev regime’s sponsors in the US and Europe.

And it is just such examples of deliberate obscurantism over Ukraine that has to a large extent discredited many Western media outlets when it comes to the continuing conflict in the country.

Odessa and the real dark side of the force

A serious journalist writing about Odessa, and using the metaphors of “Darth Lenin” and Star Wars might have explored the truly sinister forces at work in Ukraine’s all-important port city. A hotbed of political activism and site of the infamous May 2nd massacre, Odessa has been the scene of some of the worst, but by no means exceptional, political repression. Activists, journalists and bloggers have been deliberately targeted for physical attacks, kidnapping, and arbitrary imprisonment, all under the watchful eye of the allegedly ‘democratic’ government in Kiev, backed by the US-NATO powers.

In late 2014 and early 2015, editors at the important anti-Kiev website infocenter-odessa.com were intimidated and arrested for various so-called ‘crimes,’ including being in possession of video evidence of illegal shelling by Ukrainian military, and of a list of names of political prisoners held without trial in Odessa. One would think that Western journalists, in the interests of their Ukrainian colleagues, and in defense of the Geneva conventions protections for journalists, would perhaps consider such information worthy of publication. Alas, not.

Aside from journalists, a large number of activists have been detained, kidnapped, and/or tortured by Ukrainian authorities and their fascist goons. Key members of the Borotba (Struggle) leftist organization have been repeatedly harassed, arrested, and beaten by the police. So too have been communist activists and party members such as Pavel Shishman and Nikolai Popov, among many others. These courageous men and women are the real victims of the “decommunization” laws and, unlike the Lenin statue, their persecution and repression cannot be trivialized as a mere humorous footnote.

Aside from these shameful attacks on leftist formations, multicultural institutions in Odessa have also been repressed under the pretext of “Russian separatism.” A multi-ethnic, multi-nationality organization known as the Popular Rada of Bessarabia (PRB) was founded in early April 2015 in order to push for regional autonomy and/or ethnic autonomy in response to the legal and extralegal attacks on minorities by the Kiev authorities. It was reported that within 24 hours of the founding congress, Ukraine’s SBU (security services) had detained the core leaders of the organization. Within two weeks 30 more PRB activists were arrested, including founding member Vera Shevchenko. Perhaps such egregious political repression should have found its way into the pages of The Guardian? Alas, no.

It is plainly obvious that The Guardian, like all Western corporate media, intends to continue to distort the true nature of the situation in Odessa, and in Ukraine generally. Of course, the argument in this case could be that the article simply was covering a kitschy pop culture story, rather than a deeply political issue. But such a response is pure deflection. Everything in Ukraine is political in this time of civil war and instability. And to gloss over the repression and violence is to tacitly approve of it.

Naturally, this is simply par for the course for Western media, be it of the liberal or conservative variety. But, increasingly each day, these outlets are discrediting themselves by showing just how hypocritical they are. They’ll run a light-hearted story about a Lenin statue, but make no mention of the murder of journalists, or of the Nazi rallies in support of the murderers in the very same city.

This is shameful. This is embarrassing. This is Western propaganda at its finest.

This article first appeared at New Eastern Outlook. Eric Draitser is an independent geopolitical analyst based in New York City, he is the founder of StopImperialism.org and an op-ed columnist for RT and exclusively for the online magazine “New Eastern Outlook”.