The following are two mainstream news stories reporting on the speculation that the economic and travel sanctions by the European Union against Russia and many of its political leaders are likely to be renewed in July when they are due for review. 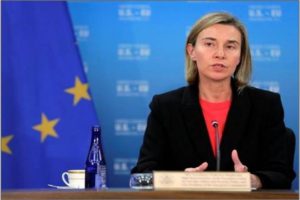 The writer of the Forbes article below provides a typical example of how this story is written in order to make it appear that Russia bears the blame for this. He writes, “The [Minsk-2 ceasefire] accord requires Russia to stop supporting anti-government militias in eastern Ukrainian cities like Donetsk and Luhansk. Putin admitted last year to providing more than mere tactical support [??] to rebel groups…”

The Minsk-2 ceasefire agreement of February 2015 was nominally endorsed by all sides drawn into Kyiv’s civil war in eastern Ukraine. It was endorsed by no less than the UN Security Council. The accord does not contain the word “Russia”. It speaks of the obligations of the Ukrainian government and the rebel forces against which the government has been waging war. The text by the Forbes writer cited above is referring to Clause #10 of the Minsk-2 agreement, which states: “10. Pullout of all foreign armed formations, military equipment, and also mercenaries from the territory of Ukraine under OSCE supervision. Disarmament of all illegal groups.”

Here we see the Western media game of doublespeak in action. There is no ‘Russian’ military presence in eastern Ukraine nor are there any Russian “illegal groups”. But on the other hand, in Ukraine there are three foreign countries with a military presence (in the guise of ‘training missions’)—the United States, Britain and Canada. As well, there are multiple, “illegal” (to use the language of Minsk-2) Ukrainian extremist paramilitary formations which operate in eastern Ukraine, including with foreign mercenaries in their ranks.

Since Minsk-2, some but not all of the paramilitary formations, including the ‘Azov Battalion’, have been given the cover of operating under the umbrella of Ukraine’s National Guard.

Meanwhile, daily shellings and other attacks against Donetsk and Lugansk by the Ukrainian military and paramilitary formations are occurring, and multiple, additional violations of Minsk-2 by Ukraine are ongoing, notably Ukraine’s refusal to negotiate with the rebel governments of Donetsk and Lugansk. Not a peep of all this is reported in Western media, nor is it commented by Western governments.

So with the requisite doses of silence, obfuscation, and false claims of Russian intervention, including the Forbes writer below writing that Russia is “supporting anti-government militias in eastern Ukrainian cities” (Russia is in point of fact supporting the political right of the people of Donetsk and Lugansk to have a say in their future and to live free of military bombardments by their supposed national government), hapless media consumers in Western countries are misinformed and left to wonder what the heck is truly going on in eastern Ukraine. Mission accomplished.

Sanctions on Russia not going away anytime soon

The Russians will blame Ukraine. The Europeans will blame the Russians. Meanwhile, market consensus seems to have gotten this one right. No, Russian sanctions are not going to get lifted in July as a few contrarians believed in January.

“I told Vladimir Putin when I went to Moscow that we want to lift sanctions, even if progressively,” French Foreign Minister Jean-Marc Ayrault told France 2 television on Friday. “But for that, things have to move, and so far things are not moving.”

What’s not moving? The Minsk II Accord is not moving. In fact, given the governability woes in Kiev at the moment, there is no way the Minsk II agreement can be fully implemented without political willpower in the capital.

Russia has its part of the deal to adhere to as well. The accord requires Russia to stop supporting anti-government militias in eastern Ukrainian cities like Donetsk and Luhansk. Putin admitted last year to providing more than mere tactical support to rebel groups that have since created their own mini-enclave within Ukraine. They want autonomy. Kiev does not want to give it to them. But putting autonomy up for a vote is a major part of Minsk II and Ukraine’s government has proven unable or unwilling to make that happen.

Putting autonomy up to a vote sets the Donbass region, which encompasses both Donetsk and Luhansk cities, to become the next Crimea. Two years ago, that Black Sea peninsula was semi-autonomous and part of Ukraine’s economy. Crimea is home to the historically significant city of Yalta, and also home to Russia’s only warm water naval port. Today, Crimea is a Russian oblast following a secession vote that took place in March 2014. Returning Crimea to Ukraine is not part of the Minsk II agreement. But a cease fire in the Donbass is, and so as long as their is gunfire in eastern Ukraine, the European Commission will pressure member states of the E.U. to stick with sanctions.

On Friday, Russia’s Tass newswire reported that at least 5,000 protested against elections in the Donbass. [Story here in RT.com.]

Ukrainian president Petro Poroshenko showed he could be a voice of reason that same day, arguing against any continued armed conflict against the pro-Russia militias in the region. “I’d like to say once again there’s an absolutely clear position and it suggests there’s no getting Donbass back militarily,” Poroshenko reportedly said on Friday [May 20] during a meeting with Ukraine’s National Security and Defense Council. Poroshenko has been only mildly interested in a vote in Donbass.

But even if he was adamant about forging ahead, there are enough opposition forces in the Ukranian parliament to roadblock such efforts. That means Ukraine is as much to blame for the failure of Minsk as the Russians, whose involvement primarily exists in the shadows of covert operations, often subject to conspiracy theory and unreliable sources of information.

Meanwhile, market consensus has gotten the Russia story right. Back in October, investors and business leaders attending an investor forum hosted by CNN’s Richard Quest was asked when Europe and the U.S. would lift sanctions on Russia. The vast majority said they would not be lifted in 2016. Others said they would remain permanent. Both the U.S. and European Union have sanctions out on Russian financials and energy companies. Russia retaliated by banning imports of European and American agribusiness products, from dairy to fish.

Contrarian hedge fund manager David Herne of the Specialized Russia Growth Fund in the Caymans said sanctions removal would be a boon for Russia’s economy and would blow away the dark clouds hovering over Russia. Herne was featured in the most recent FORBES Investment Guide. “I don’t know when Russia’s market will get better. I just know that it is going to be worth a lot more than it is today,” he said.

Known on Wall Street as the ‘Wild East’, Russia has been closely tracking the fortunes of oil rather than Western politics. To date, the Market Vectors Russia (RSX) exchange traded fund is up 14.2%, beating both the MSCI Emerging Markets Index and the S&P 500. RSX also beat the market in the first quarter, rising 11.7%. By comparison, Herne’s Russian Growth Fund is beating all three — MSCI EM, the S&P 500 and the popular Russia ETV — rising 16.8% in the first.

EU seen on track to extend economic sanctions on Russia

BRUSSELS – The European Union is on track to renew economic sanctions on Russia over the crisis in Ukraine when they expire in July, though an extension could be contested and only short-term, diplomats and officials said.

The 28-strong EU needs unanimity to keep the sanctions in place and the bloc’s unity has been increasingly tested on that. While some states stress the resurgent Russia has not delivered on commitments in the so-called Minsk peace process for east Ukraine, others want to restore trade ties with Moscow.

“EU heads of state or government had tied the lifting of the sanctions to a full implementation of the Minsk Agreements. So far, this has not been reached,” Mogherini said in an interview.

“There have always been different opinions on some elements of our sanction policy. It will probably stay that way…What is important is that we keep this unity and decide all together.”

The EU slapped sanctions on Russia after Moscow annexed Crimea from Ukraine [sic] in March 2014. It stepped them up later that year as the Kremlin backed rebels fighting Ukrainian troops in east Ukraine, where more than 9,000 people have been killed.

The EU says it will ease sanctions only upon Russia’s full implementation of the Minsk agreements, but progress on applying the peace accords – negotiated by Berlin and Paris – has stalled for months.

Moscow and Kiev blame each other for failing to stick to the deal, which includes organizing local elections in east Ukraine, restoring Kiev’s control over the whole border with Russia, and the withdrawal of heavy weaponry from the conflict zone.

Italy, Greece, Cyprus, Hungary and Bulgaria are among EU states skeptical that sanctions should be extended, diplomats say, facing off against Britain, Sweden, Poland and the Baltic states. “I don’t see how we could not extend them in July. The conditions, including Minsk, are not met,” said one EU official.

Another official said the most likely scenario was a six-month extension, adding that G7 leaders would discuss the matter at their next summit in Japan on May 26-27 as the EU and the United States aim to keep a joint stance on Russia.

A rethink towards year-end

Sources said Renzi sounded more critical of Moscow and signaled no opposition to extending sanctions this time around at a meeting last month between the leaders of Britain, France, Germany and Italy with U.S. President Barack Obama.

“If Ukraine does its homework and Russia continues to be an obstacle, then an extension of the sanctions shouldn’t be a problem,” a senior German official said. “Renzi may not be the big hurdle in the sanctions debate that he has been.”

Opposition – but not a full-on veto – could come from Slovakia, Hungary and Greece, according to EU sources. “They all want to say something loud to help their business relationships with Moscow. But I would not expect them to block an extension,” a senior EU official said.

However, even though the EU makes easing sanctions conditional on the full implementation of the Minsk accords, there are growing doubts about whether the troubled peace process has much of a future left.

While it helped to sharply decrease violence in east Ukraine, it has failed to resolve the conflict. The questions is what should follow if Minsk sponsors declare it dead.

In saying the EU policy would not change yet, Mogherini signaled a broader review of policy later this year: “In the second half of the year,” she told Die Welt, “EU governments should make a substantive political evaluation on the degree of implementation of the Minsk Agreement, and on how the way forward toward solving the conflict in Ukraine looks like.”

Other types of EU sanctions on Moscow, namely the restrictions on economic relations with Russia-annexed Crimea and travel blacklists on Russian officials and individuals, expire in late June and mid-September, respectively.

That means that even if the economic measures are renewed now, there are likely to be more heated discussions on the EU’s stance on Russia in the second half of the year.

“There may be some problems this time around but I expect no drama,” said another EU official. “The real drama we see coming in December.”