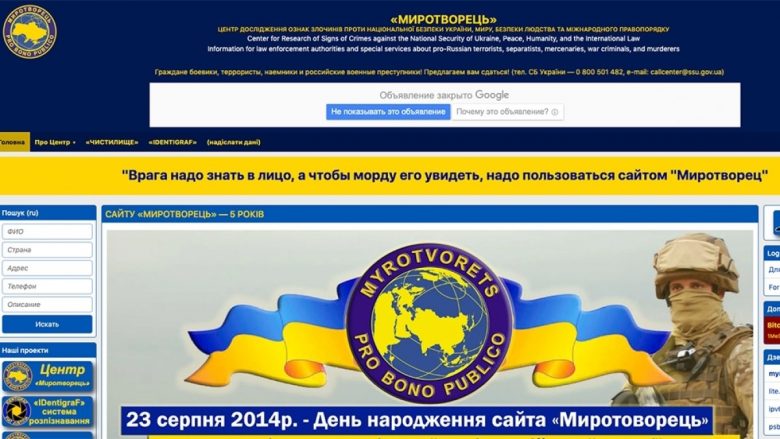 In an extended version of Eva Bartlett’s article originally published in RT, she investigates the Myrotvorets “kill list”, which is an issue trending in independent and Russian media, but not in the mainstream international press.
_________________________

This week, a number of international and Russian journalists convened in Moscow – with more joining by video link – to discuss the now-infamous Ukrainian Myrotvorets “kill list.” Many of them are included themselves.

“…a screenshot from the Ukrainian site Myrotvorets, where the photo of Daria Dugina is crossed out and it says “liquidated”.
“They are openly flaunting her murder,” the Russian envoy said.”https://t.co/6CkLrIehAz pic.twitter.com/3kyxxyDfVr

While some don’t take it seriously, the horrific car-bombing murder of Darya Dugina on August 20 and the subsequent marking on her Myrotvorets entry as “liquidated” makes it fairly clear the people behind the list do, in fact, want people dead.

The same thing happened to the entry of Russian photojournalist Andrei Stenin and many others listed and subsequently killed, including the Italian Andrea Rocchelli.

“September 8 is observed as International Day of Journalists’ Solidarity. On this day, the world commemorates members of the press who died in the line of duty…”

The head of the Foundation to Battle Injustice, Mira Terada, who convened the panel, noted that of the thousands of names entered on the site, 341 are journalists and, shockingly, 327 are minors.

“Publishing personal data on minors is a crime. It’s like a menu for pedophiles or people doing human trafficking.”

While her concern is for the children, journalists, activists, political figures and even ordinary Ukrainians who have somehow angered the Kiev regime and those behind the list, Terada now needs to exercise some caution after she herself was added to the database.

An hour and a half after a July 21 press conference about children being placed on Myrotvorets, Mira found herself listed. “This changed my life. I have to be vigilant 24/7,” she said.

Christelle Néant, a French war correspondent reporting from Donbass for the past six and a half years, mentioned to me before the panel began that some of the information on the site is not disclosed to the general public, and is password-locked.

Néant, who said she’s been receiving death threats for years, spoke of how it impacts her: “Every time I use my car, I check underneath it for any unpleasant surprise,” referring to a potential car bomb. “I don’t publish any photos with people I live with or love. I have to be vigilant at all times.”

“I’m not a terrorist, not a criminal, I’m just a correspondent. This list must be closed and all of those involved must be held accountable.”

German journalist Thomas Röper rightly noted that Western media outlets prefer to look the other way. “They could have reported on this, but they’re saying nothing.”

He also pointed out the silence of the German government, even when asked at press conferences.

“A state has a duty to protect its citizens, but I haven’t seen anything from my government to condemn the fact that Germans are on this list and one German national has been killed.”

And, in fact, rather than protect German journalists, the government is persecuting them, as is the case with Alina Lipp, whose bank account, and that of her mother, was closed after the German government launched a criminal case against her for her reporting from Donbass.

Russian journalist Veronika Naydenova, originally from Crimea but living in Germany, was added to the list in January, also after raising the inclusion of children, including 13-year-old Faina Savenkova, from the Lugansk People’s Republic.

“The same day my article was published, I was added to the list. But this hasn’t stopped me, I’ve written many articles since.”

She highlighted an additional, very real, threat: that of the refugees who’ve come to Germany from Ukraine, it isn’t possible to know who is merely a refugee and who holds Ukrainian nationalist extremist views. This is a very real fear for Naydenova, whose address is listed on Myrotvorets.

The same happened with Syrians who entered Germany and other countries as refugees. Some of them had affiliations to, or were members of, terrorist groups in Syria, and posed very real threats to supporters of Syria in Germany. As I wrote in a previous article, Kevork Almassian, a Syrian living in Germany, was chased, smeared, harassed and even physically attacked multiple times by the sympathizers of the Free Syrian Army (FSA) and other terrorist groups.”

Dutch journalist Sonya van den Ende likewise fears returning home. “I’m labeled an ‘enemy of the state’ now in the Netherlands. I cannot go back, it’s very dangerous for me to do so.”

Janus Putkonen, a Finnish journalist who has been living in Donbass since 2015, pointed out how the risk extends globally.

“Because the Myrotvorets kill list has not been stopped, people around the world are now in danger of falling victim to the state terrorism of Ukrainian Nazism, comparable to ISIS terrorism.”

But, most of all, it threatens Ukrainians within Ukraine, something British journalist Johnny Miller emphasized.

“If you’re a journalist, blogger, political figure, or a citizen in Ukraine who wants to criticize extremism in Ukraine, which there is a lot of, or if you want to criticize Ukrainian government policies, most likely you’re going to be put on that list. And be under serious threat of death.”

Miller, who has reported from areas of western Ukraine, raised another important point:

“There are so many people in Ukraine who want to push for peaceful negotiations with Russia. But if anybody in Ukrainian society wants to stand up and push this line, they’re most likely going to be put on that list. Myrotvorets is very much a symbol of the extremist elements in Ukraine at the moment.”

For myself, I’ve been on the list since 2019, after going to Crimea and reporting from areas of the DPRwhere civilians were being terrorized by Ukrainian shelling, houses destroyed “street by street” as a local told me.

Independent journalist @EvaKBartlett has been reporting from Donbass since early in the US-Russia proxy war despite knowing that she’s on a hit list of so-called “enemies of Ukraine.” The list was made by a group called “Mirotvorets” which means peacemakers in English. pic.twitter.com/kC4oQOW3F7

For various reasons, I haven’t been in my native Canada since February 2020, and at this point, don’t know what fate I would face were I to go back.

Ottawa unconditionally supports the Kiev regime, including its war against the civilians of Donbass, which the country has abetted by sending money and weapons to Ukraine for years before Russia’s military operation began in February.

Canada has spent nearly a billion dollars to train Ukrainian forces since 2014, including Neo-Nazi Azov fighters.

“…all Canadian Liberal governments have supported the Ukrainian Banderites since the beginning of WW2…Worse still, the current Canadian government is composed of Liberal Prime Minister Justin Trudeau, flanked by a Banderite deputy, Chrystia Freeland.”https://t.co/m7ZMZ3ulMt

But in addition to that, the Canadian government knows about Myrotvorets. The state-run Canadian Broadcasting Corporation (CBC), Canada’s main propaganda outlet, in July ran a smear piece on me, using information apparently gleaned from my Myrotvorets entry, though it doesn’t mention the kill list by name.

Some interesting things about this video.

How do I think I know CBC was aware of the kill list entry on me? Their producer emailed me for an interview (which I did not concede to), mentioning my April participation in a Moscow-based panel on Ukraine’s war crimes. Except it wasn’t April, it was on March 11. The only other source for my participation being in April was, you guessed it, Myrotvorets.

Of course, there was no condemnation or call to shut down Myrotvorets (which independent Canadian media outlets previously interviewed me about and subsequently contacted the CBC about). Instead, they tried to spin my multiple reports on Ukraine’s war crimes in Donbass as a way to smear me as a Russian propagandist.

And now, the CBC has flagged my name to Ukrainian Nationalists in Canada who might otherwise not have known of me, and to Canadians who went to fight in Ukraine, became radicalized and indoctrinated, and could commit Azov-style crimes against journalists like me who have been reporting from the other side.

And although Canadian media are currently talking a lot about harassment of Canadian journalists, not a single Canadian corporate media outlet has contacted me about the kill list.

Journalists already have enough reasons to fear being targeted – one example is the August 4 bombing by Kiev’s forces of a Donetsk hotel that multiple journalists, including myself, were in. There is no conclusive proof that the hotel and the journalists were the intended targets, but given everything mentioned above, it’s certainly within the realm of possibility.

After the panel, I chatted again with Néant, who said she’d been appealing to international organizations about Myrotvorets for years.

“I’ve written to organizations like the OSCE, Amnesty, etc. None reacted, even when I discovered that children are on this list.” All she got was an automated confirmation of receipt.

Some time ago, when I searched the websites of bodies who supposedly advocate for journalists, I found scant mention of the kill list. The one I did find was pretty lack-lustre, and it was from 2016.

I was surprised to see RWB actually previously mentioned Ukraine’s kill list, a list designed to hamper the work of journalists (and silence any sort of dissent, including from opposition members, average civilians…) https://t.co/aS0rtU3tNz

During a Q&A after the panel, an American man in the audience suggested that Russia should have its own “hit force” going out and doing the same thing to the Ukrainian side.

“When I tell people here in the UK about this kill list, one of the first things that people reply to me is,

‘Well, I’m sure Russia has a similar list.’  And I have to explain to them that, no, Russia does not have a list published on the internet with the names and home addresses of journalists and children and promote their killing. That’s the distinction between a civilized government and extremism and barbarism.”

According to Mira Terada, her foundation transferred documents and the evidence it collected to Russia’s Federal Security Service and is asking the service to recognize Myrotvorets as a terrorist organization.

Former US Marine and UN weapons inspector Scott Ritter likewise described Myrotvorets as “an instrument of terror” that “should be taken down at the insistence of the US Government.”

Note the irony: We are listed as terrorists for the work we do to highlight the suffering of civilians under the Kiev regime’s actual terrorism. 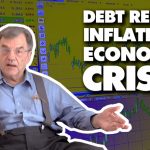 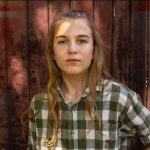