KYIV–Ukraine’s biggest political party said on Tuesday it will rate the performance of Prime Minister Arseny Yatseniuk’s government as “unsatisfactory” in an imminent vote that could precipitate a collapse of the coalition government and snap elections. 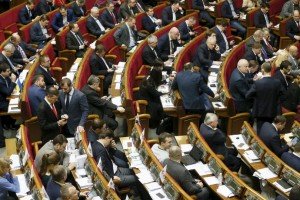 Parliament could vote as early as Tuesday on a report that reviews the government’s performance in 2015 and its agenda for this year. The final time and day of the vote has not been confirmed.

If the government loses, lawmakers need 150 signatures in parliament to hold a no-confidence vote, which could lead to national elections if the coalition cannot agree on a new cabinet. Two legislators told Reuters they had already secured the signatures.

Yuriy Lutsenko, the parliamentary leader of President Petro Poroshenko’s party, said his party had “taken the decision to rate the cabinet ministers’ work as unsatisfactory”. Poroshenko heads Ukraine’s largest party [sic], and Yatseniuk the next largest. Both are in the ruling coalition.

Maksym Burbak, the parliamentary leader of Yatseniuk’s party, told lawmakers that the consequences of voting against the government would be felt “literally the next day – since this could trigger early elections and chaos.”

The government’s collapse would dismay Ukraine’s international backers, who have invested much cash and political capital supporting the Ukrainian government in its standoff with Moscow after Russia’s annexation of Crimea in 2014.

Last year, the International Monetary Fund gave Ukraine a $17.5 billion package to be spread over four years, but so far only $6.7 billion has been disbursed.

Ukraine has been waiting since October for the next tranche of aid, worth $1.7 billion, which has been held up by concerns over the slow pace of reform.

The economy minister quit at the start of February, complaining corrupt vested interests were meddling in his ministry’s work.

Ukraine’s hryvnia currency fell to a new 11-month low of below 27 to the dollar on Tuesday, central bank data showed, and has fallen 12.2 percent since the start of the year.

The government is struggling to haul Ukraine out of recession at the same time it is fighting a pro-Russian separatist insurgency [sic] in its industrial east.

Prime Minister Yatseniuk’s approval ratings have plunged to less than one per cent since taking office in 2014. He has no obvious successor, although the parliament speaker and the technocrat finance minister are considered contenders.

Ukraine’s President Petro Poroshenko has called for Prime Minister Arseniy Yatsenyuk to resign and for a total cabinet reshuffle Tuesday amid a growing crisis following the resignation of several reform-minded politicians who accused the government of giving only lip service to fighting corruption.

Protesters gathered outside the parliament in Kiev to demand a crackdown on corruption and improved economic conditions ahead of a scheduled no-confidence vote, local media reported.

In a statement on the presidential website, Poroshenko also called for the resignation of Prosecutor General Viktor Shokin, acknowledging that a government reboot was necessary to avoid early elections.

“To restore trust, therapy is too little; surgery is needed,” said Poroshenko’s statement, which paved the way for the formation of a technocratic government. He said political infighting in Ukraine served the interests of the country’s neighbor, Russia.

Poroshenko and Yatsenyuk are both part of the ruling coalition and have seen their approval ratings drop dramatically in recent months, with citizens unhappy over the pace of reforms. Members of parliament, the Verkhovna Rada, will need 226 votes Tuesday to dismiss Yatsenyuk and begin the process of selecting a new prime minister, AFP reported.

“My team and I have no wish to be a cover for open corruption or puppets under the control of those who want to establish control over state money in the style of the old authorities,” Abromavicius said at the time of his resignation, Reuters reported.

Relations between Ukraine and Russia are at their worst following Russia’s annexation of Crimea in March 2014 and the conflict in eastern Ukraine that has pitted Ukrainian government forces against Russian-backed rebels. The conflict has left more than 9,000 people dead, and fighting flared again Monday as the government reported three servicemen killed and seven others wounded.

Deputy General Prosecutor Vitaliy Kasko resigned on Monday. In a televised address, he called the office he worked for a “hotbed of corruption”, another blow to government attempts to clean up the judiciary, a crucial step to unlock more Western aid…