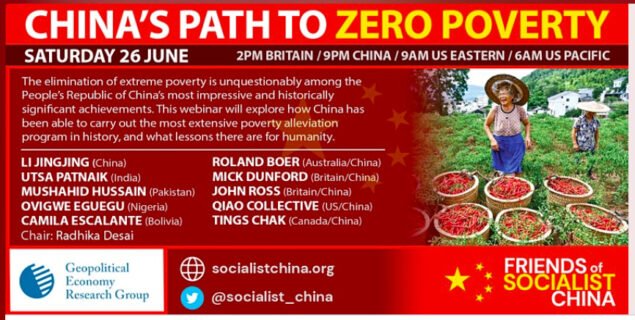 On 1 July 2021, the Communist Party of China celebrates the 100th anniversary of its founding and on June 26, in the run-up to this auspicious date, Friends of Socialist China and the Geopolitical Economy Research Group will hold a webinar to explore how China has been able to carry out the most extensive poverty alleviation program in history, and what lessons there are for humanity.

You can register for the Zoom event on Eventbrite.

On 1 July 2021, the Communist Party of China celebrates the 100th anniversary of its founding. Of all the CPC has accomplished in that period, the elimination of extreme poverty is unquestionably among its most impressive and historically significant achievements.

This webinar will explore how China has been able to carry out the most extensive poverty alleviation program in history, and what lessons there are for humanity.

Friends of Socialist China is a new platform based on supporting the People’s Republic of China and promoting understanding of Chinese socialism. Its website (edited by Danny Haiphong, Keith Bennett and Carlos Martinez) aims to consolidate the best articles and videos related to China and Chinese socialism, along with original analysis.

The Geopolitical Economy Research Group is a policy institute based at the University of Manitoba and run by Radhika Desai and Alan Freeman. It analyses and proposes policy alternatives for managing the interaction of national economies and states to promote human development and mutual benefit in today’s multipolar world. 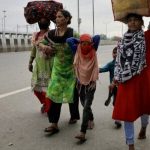 Destitution, Hunger and the LockdownIndia, Poverty 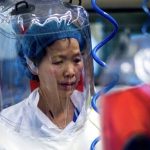 Was there a Wuhan lab leak? An inquiry won’t dig out the truth. It will deepen the deceptionAmerican exceptionalism, China, COVID-19 Corona virus