We have work to do: the threat of a U.S.-sponsored counter revolution in Cuba calls us to strengthen our solidarity with the Cuban Revolution 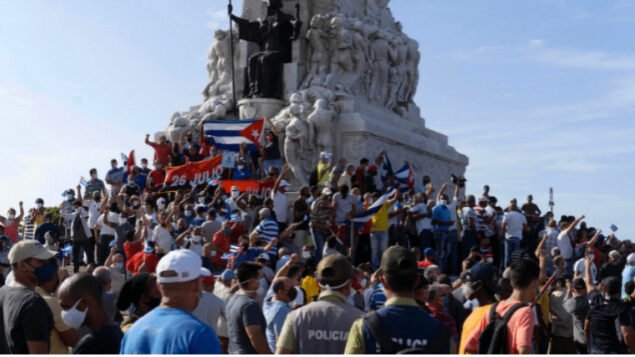 The events that recently took place in Cuba involving protests by small groups of Cubans, mostly young artists, in several cities have nothing really to do with Cuba. Those events are the sickly brain waves of a U.S. violence-prone ruling class obsessed by their nightmarish dreams of power, control and exploitation as a response to their irrational insatiable capitalist accumulation syndrome.

The events that recently took place in Cuba involving protests by small groups of Cubans, mostly young artists, in several cities have nothing really to do with Cuba. Those events are the sickly brain waves of a U.S. violence-prone ruling class obsessed by their nightmarish dreams of power, control and exploitation as a response to their irrational insatiable capitalist accumulation syndrome. Their political bullying power has been built over years of practice through warmongering military and covert interventions, greedy pillage of resources, and through the enforcement of a racketeering financial power worldwide.

Among other countries, Cuba stands out for resisting and winning over Washington’s bullying power during the 60 year long unilateral illegal economic and financial blockade intended to produce a pro-U.S. political change. Cuba is the unwilling recipient of the U.S. wrath caused by its own frustrating failures at imposing again U.S. domination and hegemony in this rebel socialist nation. But the dying U.S. empire is still trying to break an unbreakable Cuban Revolution built by peace-loving and fiercely revolutionary people who reject the U.S. irrational warfare.

However, it is important to provide the broader context for those events.

We know that it is a counter revolutionary action intended to destroy the Cuban Revolution, install a neoliberal regime that will follow the U.S. imperial diktat and effectively return Cuba to what it was before 1959. But how did it come to materialise with such prominence?

The first reason lies in that the U.S. has been updating its warmongering strategy since its defeat in the Vietnam war. The change has been from an overt boots on the ground approach to create counter revolutions (still used in some cases), to covert remote missions that allow the cowardly deniability of involvement. The U.S. has perfected the latter approach not only by the use and manipulation of the psychological mood of their target, but also thanks to technological advances.

The generic designation of this remote approach in geopolitical analyses is “Colour Revolution”.

A Colour Revolution is a model of state destabilisation. It uses external actors to activate local sleeping cells and mobilise groups, often naively co-opted, to protest, riot, disrupt and create unrest and fear. It relies on embedded corporate media to publicise the event often with false and/or biased information that promotes the ideology of the perpetrator and demonises that of the victim. Typically, the media will magnify the occurrence as a major disgruntled opposition to a supposedly autocratic government by claiming repression, and loss of certain rights or liberties. The aggressor will then magnanimously offer support and “humanitarian” aid. In reality, the goal is to illegally and surreptitiously interfere and intervene in the domestic affairs of a sovereign country in order to impose a pre-established political ideology.

For this stratagem to take hold all is needed is a trigger that will set the dramatic stage for the social “explosion”. Anything will be considered. Anything can be weaponized no matter how morally and ethically despicable that can be. Why not a global pandemic? Why not the scarce supply of food and medications resulting from illegal unilateral coercive measures and an economic siege?

Those who regularly follow Washington foreign policy will recognise many of these elements of a Colour Revolution. How can we miss the dangerous use of this strategy in China’s Hong Kong risking a new cold war with Beijing?

The U.S. ruling class applies this model of disruption anywhere where they want to break apart the local social cohesion and unity and produce a pro-U.S. change. This is indeed the favourite hybrid war tool of imperialism that may lead to violent coups.

It should be quite clear that the modus operandi of the recent protests in Cuba follows this precise script, but there is a second reason allowing such a prominent attention, and that is the intervention of external foreign actors.

The use of social media is quite a convenient medium to mobilise targeted people. A detailed report has been published that precisely describes how “Fake Social Media Operation from Abroad Catalyzed Cuba Incident.”

The report says that the operation against Cuba “was launched from outside of Cuba and one of its directors was the Argentinean Agus Antonelli, a right-wing political operator who has participated in several campaigns against leftist movements in Latin America.” It goes on to explain that “The operation made extensive use of robots, algorithms, and accounts recently created for the occasion, intended to amplify the messages issued by the directors of the manipulative campaign.”

We also know that the first demonstration in San Antonio de Los Baños, Cuba, was reported from the United States by the account of a Twitter user called Yusnaby with thousands of RTs.The analyst of this digital campaign is reported saying, “Curiously Yusnaby (Spanish transliteration of U.S. Navy) is the account that shows up the most by far in threads because it is part of the patterns of automated fake accounts that spread hoaxes and hate campaigns.” This was all made easy to track by following the hashtag #SOSCuba. Similar hashtag, #SOSVenezuela has been used to trigger unrest and riots in Venezuela.

The fact that several protests sprung up simultaneously in different cities in Cuba, further shows that this was not a spontaneous popular show of discontent, but rather a centrally directed and organised occurrence carefully planned and synchronised in order to produce the maximum impact for maximum visibility.

It is fitting to emphasise that the role of the internet for the purpose of creating anti-government sentiments, and possibly inciting a revolt in Cuba, may have been part of the plan of the Obama administration in its rapprochement with Cuba in 2014-2016.

The Washington Post in 2014 published an article titled: “At the heart of Obama’s Cuba doctrine? The Internet” in which it says, “White House is loosening restrictions on the export and sale of goods and services aimed at helping more Cubans communicate with both each other and the outside world”. Why such a keen interest in internet communication before “loosening restrictions” on more essential needs like food, medications and industrial equipment?

We suspected the deceiving side for the promotion of the internet in Cuba. In an analysis of Obama’s March 2016 speech in Havana published in People’s Voice I wrote, “Obama, the communicator…with a motive, is evident in his remark about access to online information, ‘if you cannot be exposed to different points of view, you will not reach your full potential’. This is clearly an indication of the importance attributed to access to U.S. dominated political points of view. Obama’s interest in telecommunication and the Internet in Cuba is not a novel idea. George W. Bush encouraged that in 2007 as a means to introduce regime change in Cuba matched with funding ‘to support Cuban democracy efforts’.”

And like in 2007, literally hours after Obama left Cuba, the U.S. State Department allocated $800,000 to “train” Cuban youth inviting non-profit organizations and educational institutions to submit proposals. Cuban youth were the target then as they have been co-opted last July 11.

Again, in that 2016 speech Obama addressed then Cuban President Raul Castro and famously said, “I want you to know, I believe my visit here demonstrates you do not need to fear a threat from the United States.” Is that so?

Joe Biden seems to show that the empire cannot be trusted.

Finally, we must be fearless and respond to the call from Cuba as internationalists that we are. The president of the Cuban Institute of Friendship with the Peoples (ICAP), Fernando Gonzalez, has made a call to reject disinformation and to multiply the unity and actions of the international movement of solidarity with Cuba in the face of the new manoeuvres of the United States against the Revolution, in a Facebook virtual event that counted with hundreds of followers from different continents.

We have work to do.

Featured image: Image of a pro-government demonstration in Havana portrayed as an anti-government protest (see caption) as can still be seen at ABC (Australia) on July 21.