‘We have to look after our homes as well as the movement’: Women at farmers’ protest 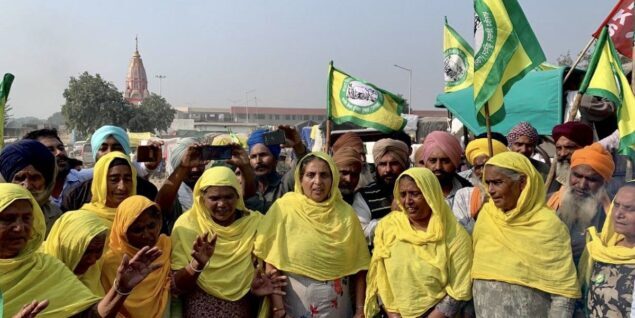 In India, while a large number of women – farmers, students, ASHA workers and others – are at the protest site, others are back in the villages tending to the farms.

New Delhi: For Jaspreet Kaur and Gurleen Kaur, both in their 40s, this is their first protest. “Farz banta hai.” This is their responsibility, they feel.

On November 26, farmers from Punjab, Haryana, Uttar Pradesh, Rajasthan and Madhya Pradesh marched towards Delhi for the ‘Dilli Chalo’ protest. The farmers’ key demand is the repeal of three laws – the Farmers (Empowerment and Protection) Agreement on Price Assurance and Farm Services Act, 2020, Farmers’ Produce Trade and Commerce (Promotion and Facilitation) Act, 2020 and The Essential Commodities (Amendment) Act, 2020 – as well as an assurance on minimum support prices. Protests have been on in several parts of Punjab and Haryana since the laws were first passed in September.

As the farmers’ protests at the various borders of Delhi complete ten days, the number of women participants is slowly but surely swelling.

Women protestors who have come from Punjab, Haryana and Uttar Pradesh are well aware that the three laws will affect them more. “It’s something very obvious. The first impact of low earnings will be on the women’s kitchens!” says Ramandeep Kaur. 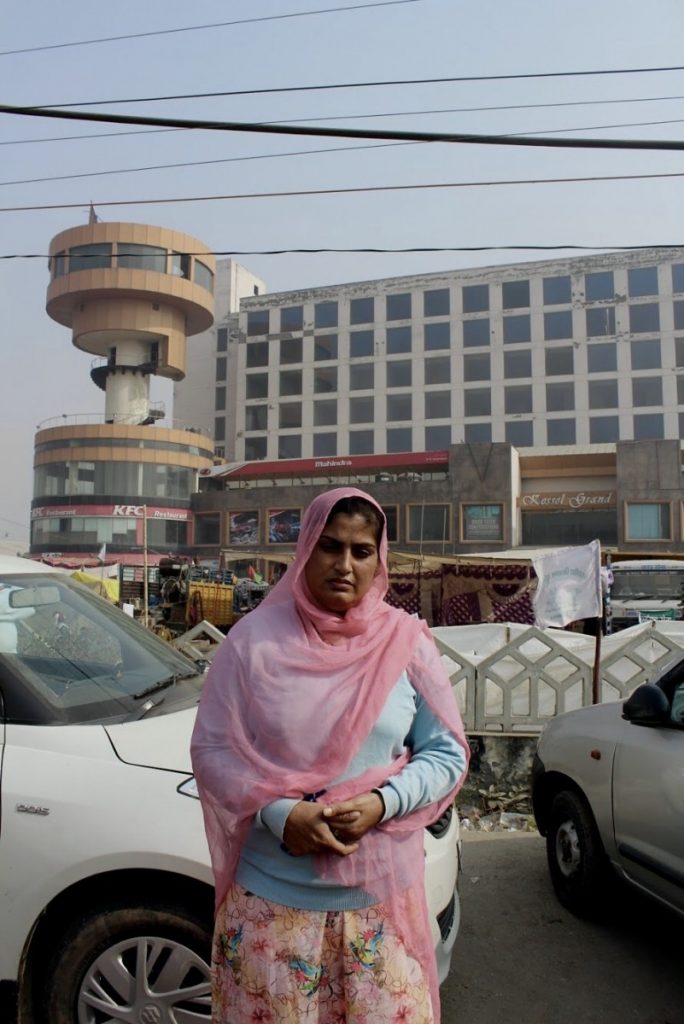 Surinder Kaur adds, “Thodi si zameen hai, voh bhi Ambani-Adani ko bhent kar denge toh kahan se khayenge (We barely have any land, if that too is gifted to Ambani-Adani, then what will we eat)?”

This sentiment is echoed by Amandeep Kaur Deol of the Stree Jagriti Ekta Manch, “Women are already treated like second-class citizens. Whether it comes to who gets food or who gets educated, we are never prioritised. Things will only get worse when farmers’ incomes takes a hit because of these laws.”

From working in the fields and harvesting crops to selling them at mandis, protesting women say they work “shoulder to shoulder with our brothers”. In fact, it is because of pending farm work back home that many women have not been able to join the protest. The wheat and fodder crops that have been sown need to be tended to. Every year, this task is performed by men. But since many are at the protests this time, women have single-handedly taken on this job. 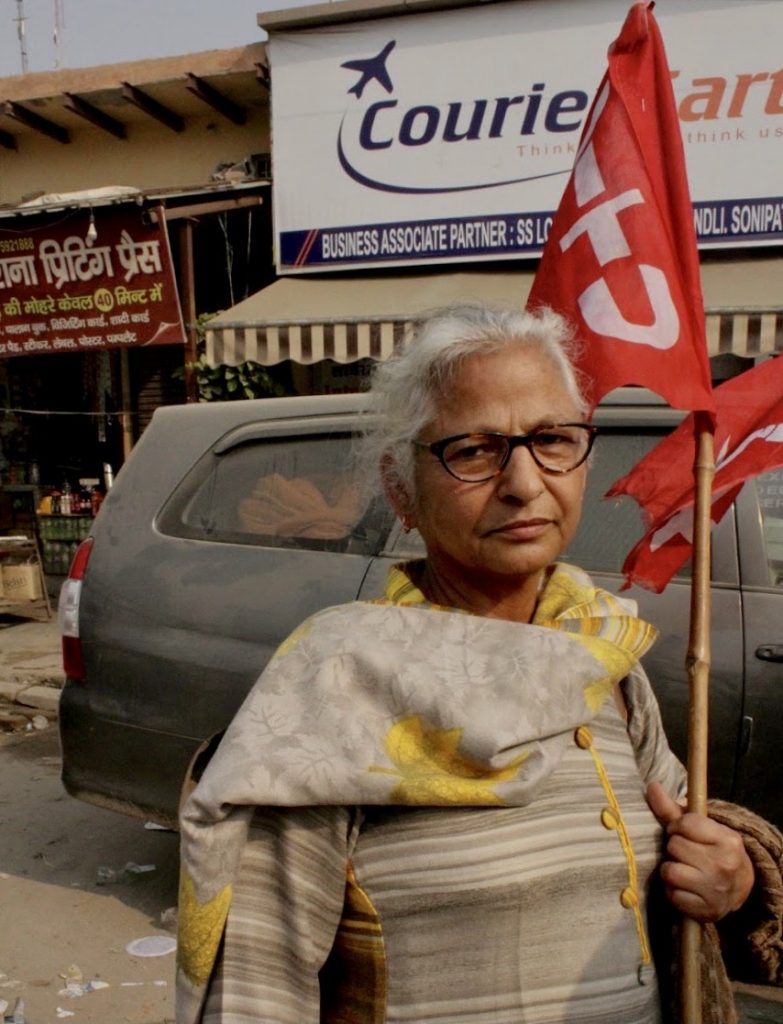 “It is because of our sisters’ silent work back home that so many men are able to come here [to the protest],” Surinder says.

Women are also preoccupied with participating in local, small-scale protests – in front of toll plazas and Reliance malls – back in Punjab. The momentum, they feel, mustn’t be allowed to slow down.

They are juggling other responsibilities, too. Some have left elderly parents back home. Others, their young children. Yet others, their cattle. “We set out early in the morning from Punjab and will return in the night. There’s no one to feed our cattle so we have to return,” says Gurleen Kaur, who has been making this long journey everyday for the past seven days.

To manage things efficiently – at home and at the protests – a particular ‘rotation system’ has been devised. After every five-ten days, some return and others take their place. “We have put this system in place because we’ve left families at home. Housework has to be looked after too. But I can assure you, the ten who leave bring 200 back in their stead,” says Ramandeep Kaur.

But Amandeep Deol’s three-year-old daughter is camped with her at Tikri border. “She’s used to it now,” smiles Deol. 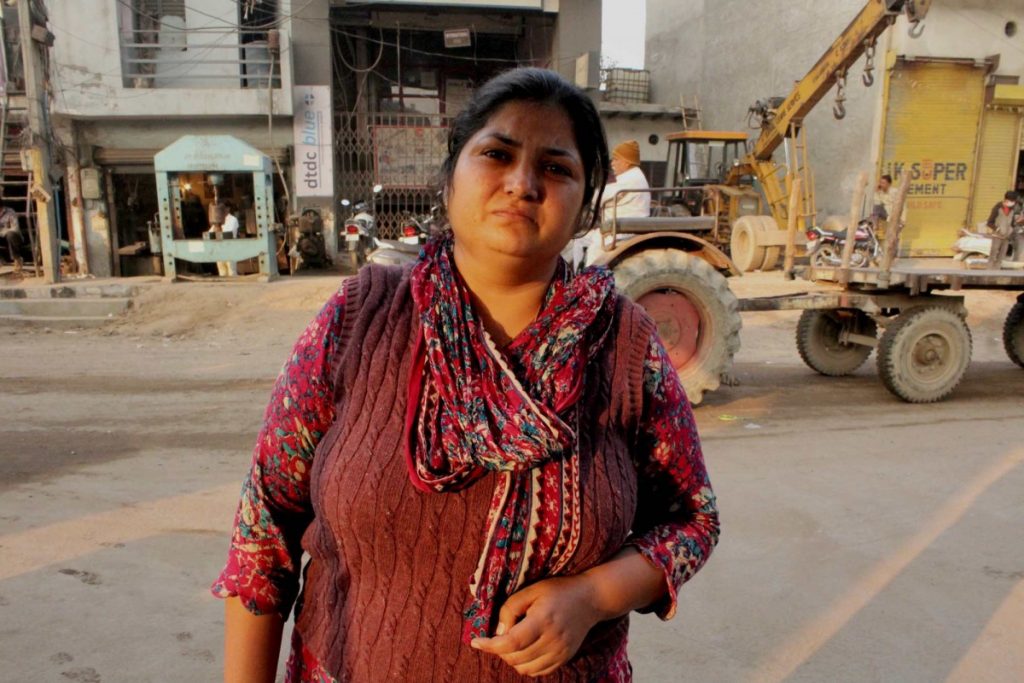 Tikri border is also where the largest group of women protestors – about 20,000-25,000 women – have stayed put since they first arrived on November 27. Organised under the banner of Bhartiya Kisan Union (BKU)-Ekta Ugrahan, they are being led by Harinder Bindu. Most of these women belong to the Malwa region – Sangrur, Bhatinda, Mansa, Barnala, Ludhiana etc. – the region that has seen the highest rates of suicides in Punjab. Farmers’ organisations, state universities and government data have all concluded that 97% of farmer suicides in Punjab take place in the Malwa region.

A majority of these suicides are because of rising debts. “Debts are mounting over wheat, rice and potato crops. Already we don’t get the MSP rate,” is how BKU-Ekta Ugrahan’s Harpreet Kaur explains the crisis of farmer suicides. She says that in her village, Jethuke in Bhatinda, the problem is widespread. 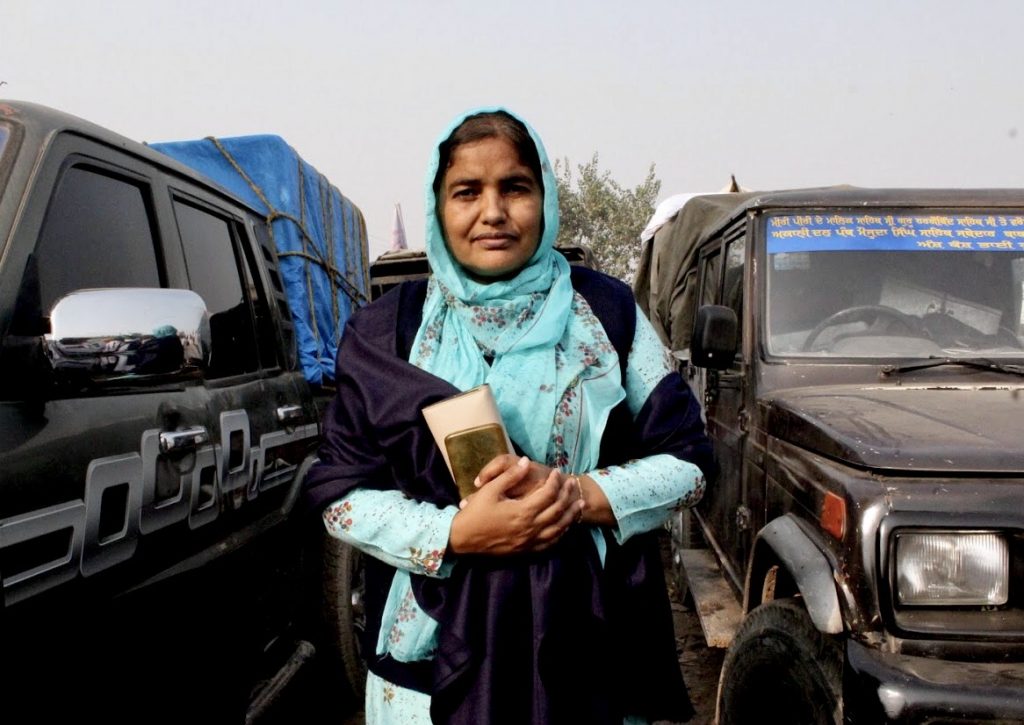 This is why women have a greater personal stake in these protests. Paramjit Kaur Landran, who was the chairperson of the Punjab State Commission for Women from 2013 to 2018, recalls a camp she set up in Mansa for widows of men who dies by suicide. After listening to their grievances, she says, one couldn’t “sleep for two-three days. We didn’t know how to help these women even wipe their tears. It comes as no surprise, then, that women from Malwa are at the forefront of this protest too.”

“Those women have seen the nuks (flaws) in the farming system and have lost their dear ones, especially their male family members, because of this. The responsibility of the family is on them now. There’s also anger towards the ill-thought-out governmental policies that lost them their families. Ab yeh na ho ke yeh jo aulaad si pyaari zameen hai, yeh bhi kho dein in kaale kanoonon ke karan (It shouldn’t happen that they lose this land, as precious as their offspring, because of these black laws).”

“First they wreaked havoc in the name of the Green Revolution. Now it is these three laws. All women might not know the exact details of the laws but without a doubt, they know that this will snatch their food,” says Harinder Bindu.

That women don’t understand these laws and have just mindlessly joined their menfolk is a common trope used to delegitimise women’s participation. “Yeh kehte hain aurat ki akal uski choti mein hoti hai (These people say that a woman’s brains are in her plaits),” scoffs Amandeep. “How will women develop a consciousness if they don’t participate first?” 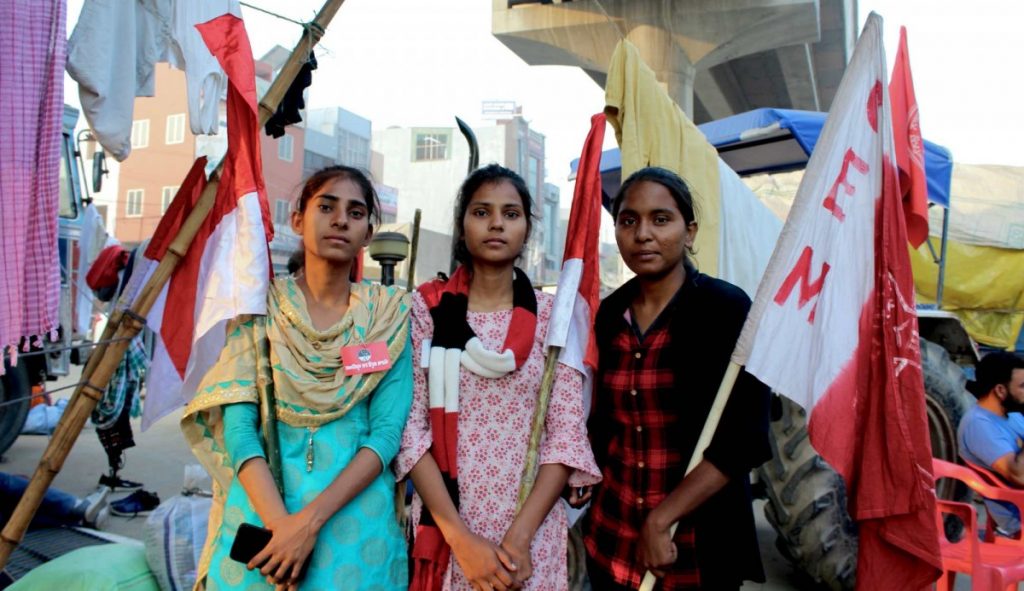 Punjab Students’ Union member Sukhpreet says, “Women are saddled with responsibilities. It’s untrue that they don’t know anything.” Many women students from Punjab and Haryana are present at Tikri border. They believe that the farm laws will ‘take away their freedom’. “With the third law – on essential commodities – prices will rise because of black-marketing. Prices are already high and incomes are falling. We, the children of labourers, will be forced to leave our education and do labour. Our freedom will be gone,” says Manisha, who is a student associated with the Chatra Ekta Manch in Rohtak.

The Essential Commodities (Amendment) Act removes commodities like edible oil, onion and potato from the list of essential commodities, which means the government will no longer regulate their production, supply and distribution. Only the Central government can regulate supply or deem any item “essential”, that too under “extraordinary circumstances”. It also says that any action on imposing stock limits will be based on price rise. Farmers fear that if the government withdraws from regulation, corporates will bulk purchase and hoard essential commodities to sell them at high rates.

“All of us – even our grandmothers – know and understand that what Modiji is doing will ruin not just us, but the entire country,” say Balwinder and Jasleen Kaur from Chandigarh. Both of them are artists but have joined the protest in solidarity with farmers. “We’re daughters and granddaughters of farmers, after all.”

Many such women are expressing their solidarity through a host of activities at the protest sites – cooking, medication, organising speeches and meetings, press briefings. At Tikri border, young women draw attention to men’s equal participation in kitchen activities. “It’s 50-50. No one has said that we must prepare food because it’s a woman’s job,” Manisha and Sukhpreet point out. 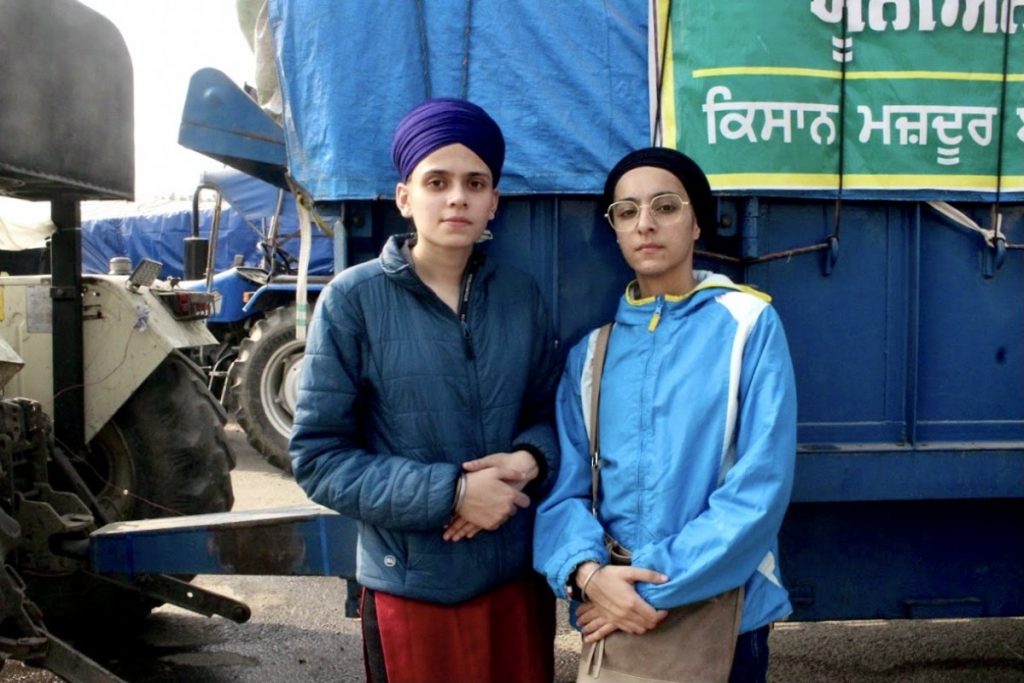 At Singhu border too, all activities are voluntary and take various shapes – sewa (service), langar (communal, free kitchen) and kirtan (devotional singing). It’s how college students Kawalpreet and Jaspreet Kaur of Akhand Kirtani Jatha show their support to the protest. “Farmers feed us. We have to stand shoulder to shoulder with them,” they say. Kawalpreet is in the middle of preparations for her SSC exam. When asked why she came despite her exams, she simply says, “Farz banta hai (It’s our responsibility).” The idea that joining this protest is a part of their duties appears true for women across generations.

ASHA workers organised under the Centre of Indian Trade Unions (CITU) have also come out in solidarity, all the way from Rout, Rajasthan. They have set up a camp and provide medicines to the protestors for free. Poonam, the head of the group, says, “Many women labour in the fields. If corporates take over the fields, there’s no guarantee that they will not throw them out. This must be resisted. Us, ASHA workers too, were promised double honorarium during COVID-19 but the government gave us nothing.” 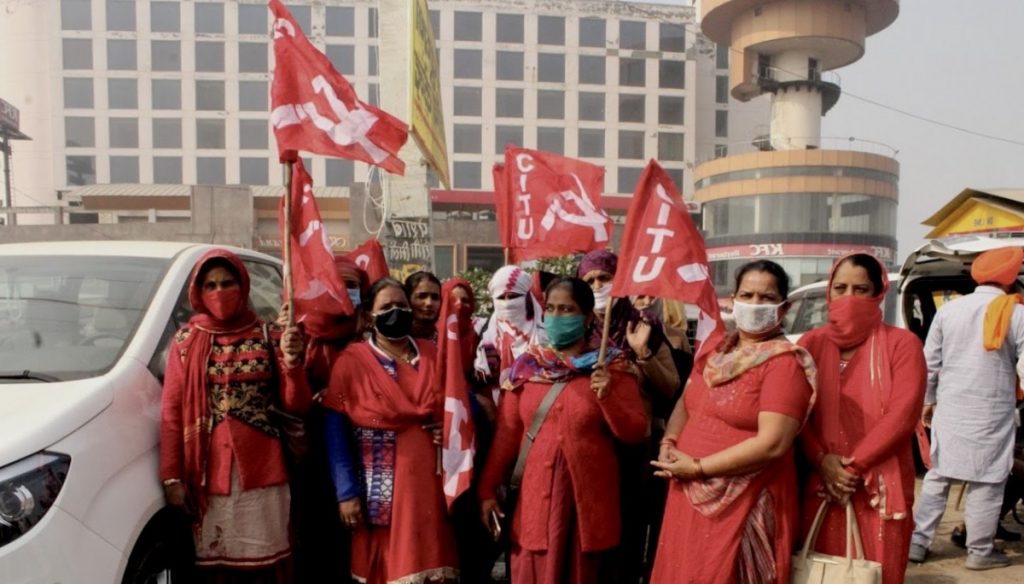 On Saturday, December 5, the fifth round of talks held between farm leaders and the Central government made no headway. Paramjit Kaur Landran is hopeful, “The government is on the back foot. There’s been a change in their stance. [Agriculture minister] Narendra Singh Tomar’s body language says as much.” But are there any plans to leave yet? “Abhi toh langar chala hi hai (The kitchens have just started running)!” she laughs.

Zobia Salam has a BA in political science from Lady Shri Ram College for Women and is currently an intern at The Wire.

Direct links to more articles on the Farmers’ strike:

Farmer Protests: Next Round of Talks on Dec 9, as Govt Seeks More Time for ‘Concrete’ Proposal (NewsClick)