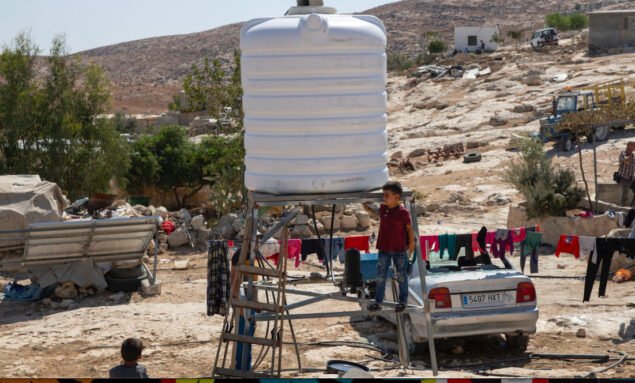 Palestinian children play by a new water tank that replaced a damaged one following a settlers’ attack in the West Bank village of Mfakara, September 30, 2021. Nasser Nasser | AP [cropped]

What was billed as a cooperative venture between Palestine and Israel is merely the occupation of water in disguise.

MASAFER YATTA, OCCUPIED WEST BANK — Last weekend, around 600 Israeli, Palestinian and international activists marched across Masafer Yatta in the Occupied West Bank to deliver a water tanker to Palestinian villagers. Their message was clear: Water is a human right, and Israel is depriving Palestine of this basic necessity.

Amid a sea of rippling Palestinian flags, demonstrators walked alongside a tractor transporting the water tanker from the village of At-Tuwani. The protesters did not reach their intended destination. Instead, they turned back at the village of Mfakarain order to avoid a confrontation with the Israeli Army waiting for them atop a nearby hill. 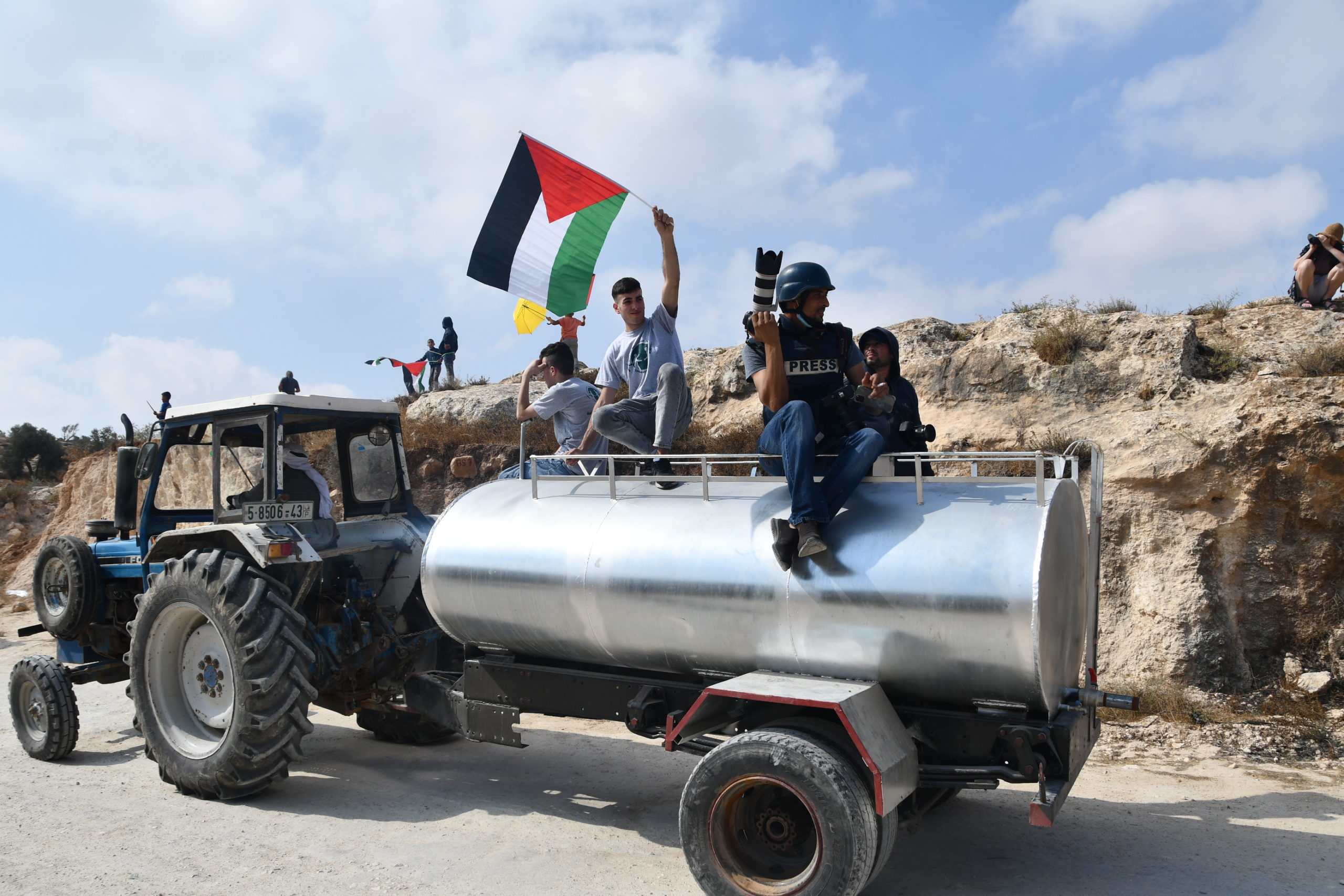 Demonstrators attempt to deliver a water tank from the Palestinian village of At-Tuwani.

“Water is a right for everyone. It doesn’t matter if you’re Black or white or Jewish or Arab,” ​​Adam Rabee — an activist with Combatants for Peace (CFP), one of the march’s organizers — told MintPress News.

On Monday, CFP, along with other human rights organizations, submitted an urgent appeal to international bodies, demanding they “pressure Israel to allow access to water to Palestinians living in Area C,” the Occupied West Bank area that includes Masafer Yatta.

CFP started the water accessibility campaign for Palestine in August. In September, they led a field visit to Masafer Yatta for 20 diplomats from the European Union, the United Kingdom, Canada, Brazil, Mexico and Switzerland. During the tour, CFP raised awareness of Palestine’s water crisis and urged the representatives to engage in dialogue with Israel toward providing Palestinians with full access to water.

“[The diplomats] saw families and children without water,” Rabee said of the visit. “My feeling is that they want to help and we have support.”

Saturday’s protest was calm and without clashes, but the event was underscored by earlier violence.

Tuesday of that week, at least 60 masked Israeli settlers raided Mfakara — throwing stones, turning over cars, cutting water pipes and slitting the throats of sheep. Five children were injured during the attack, including a four-year-old boy who was sent to the hospital after being pelted in the head with rocks. Israeli soldiers watched from the sidelines — during what activists are describing as a “pogrom”– intervening only to fire tear gas, stun grenades and rubber-coated steel bullets at Palestinians.

Earlier in September, a CFP protest to deliver water to Palestinian communities was met with violence from Israeli soldiers. Six Israelis and two Palestinans were injured — including Rabee, who was hit in the stomach with a tear-gas canister.

Protesters held blown-up images of the recent violence as they marched last weekend. In Mfakara, the ground was strewn with shards of glass. Several of the villagers’ cars were dented and the windshields shattered. 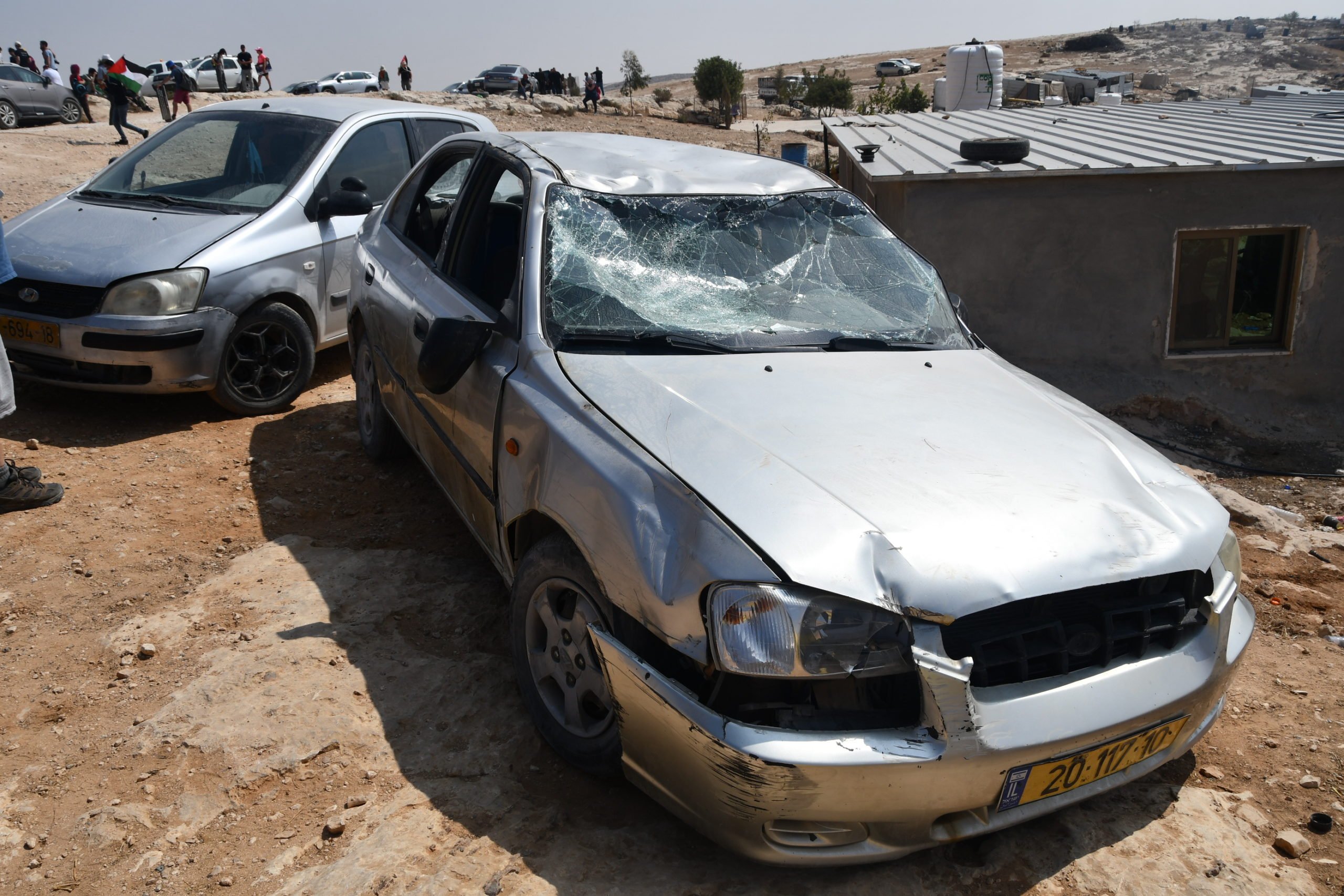 The windshield of a Palestinian villager’s car was shattered when Israeli settlers and soldiers attacked the village of Mfakara.

Noma Hamamdah, a Palestinian shepherd living in Mfakara, picked up a tear gas canister off the ground outside his home. He said this was one of 20 launched at the community by the army on Tuesday. He lifted his pants’ leg to reveal where he was hit with a rubber bullet. His daughter-in-law, Sabreen Hamamdah, said the army fired tear gas into their homes and settlers slashed the tires of their water tanker during the raid. 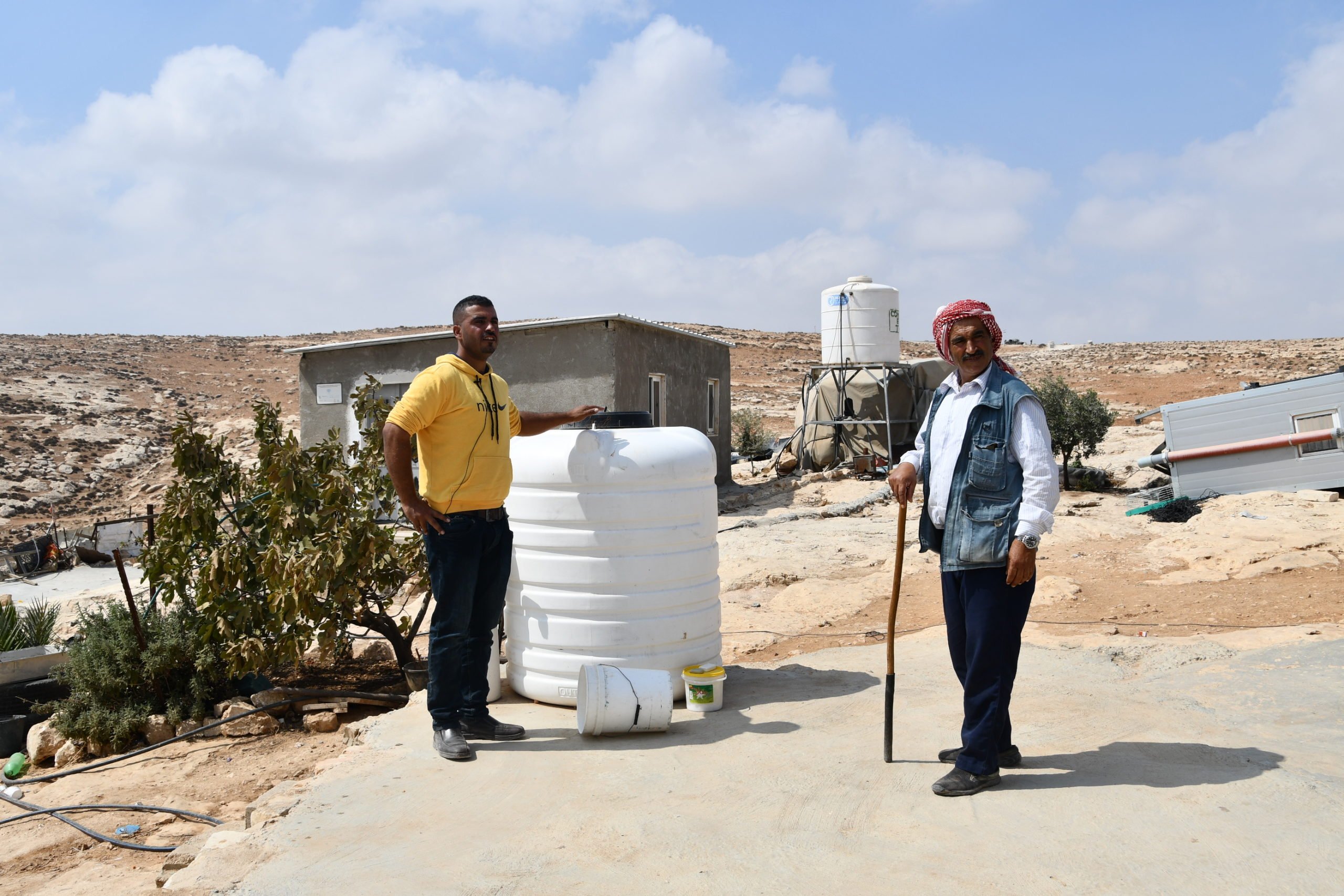 Noma Hamamdah with his son.

“Since last Tuesday we didn’t get water until today,” Noma said, referring to the delivery of the new tanker from activists. “The army aids the settlers and it’s because of the army the settlers have the ability to attack us and destroy our water tanks.” Eight windows in the family’s home were broken, Noma said. He pointed to a bullet hole in the wall of his house where Israeli soldiers fired when trying to disperse settlers. “We’ve been told [President Joe] Biden is a man of peace and he loves peace, but we’ve never heard him mention the Palestinians even once,” Noma continued. “And if the Havat Maon illegal settlement leaves us alone, then there will be peace in this area.” 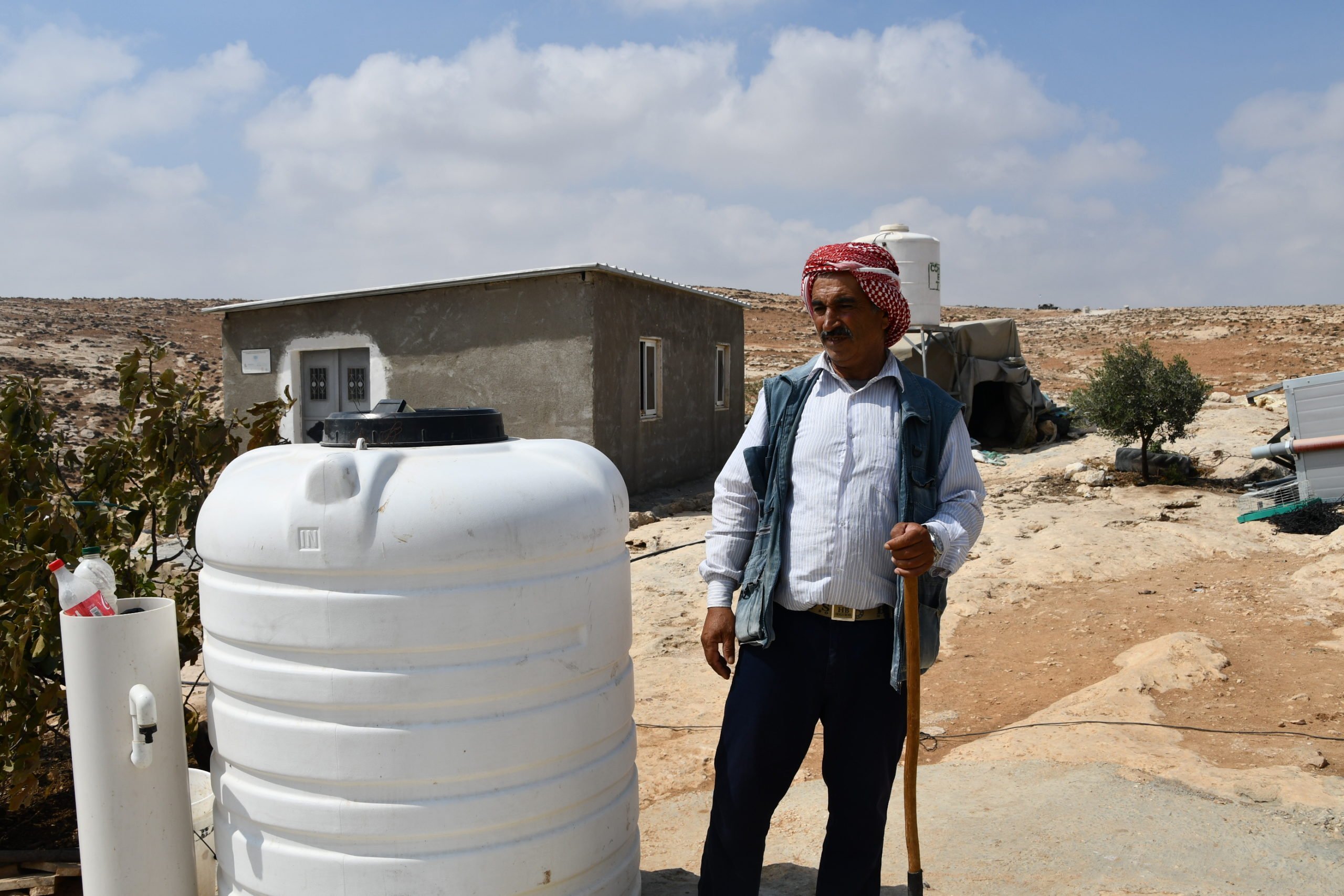 Noma Hamamdah standing next to his water cistern, in which he stores the water.

Havat Maon is a notoriously violent, illegal settlement outpost adjacent to the Palestinians villages in Masafer Yatta. All of Israel’s settlements are illegal under international law but legal under Israeli law. Outposts, constructed without Israeli authority, are defined as illegal by both international and Israeli law.

On days without water, Mfkara operates much like a commune. “We usually borrow from each other and when the water comes, we redivide the water,” Noma said.

Sabreen described how household chores like washing dishes, doing laundry and bathing the children are put off until water is replenished. “I have to put everything on hold until there is water,” she told MintPress. “I can’t do anything until the water comes back.” 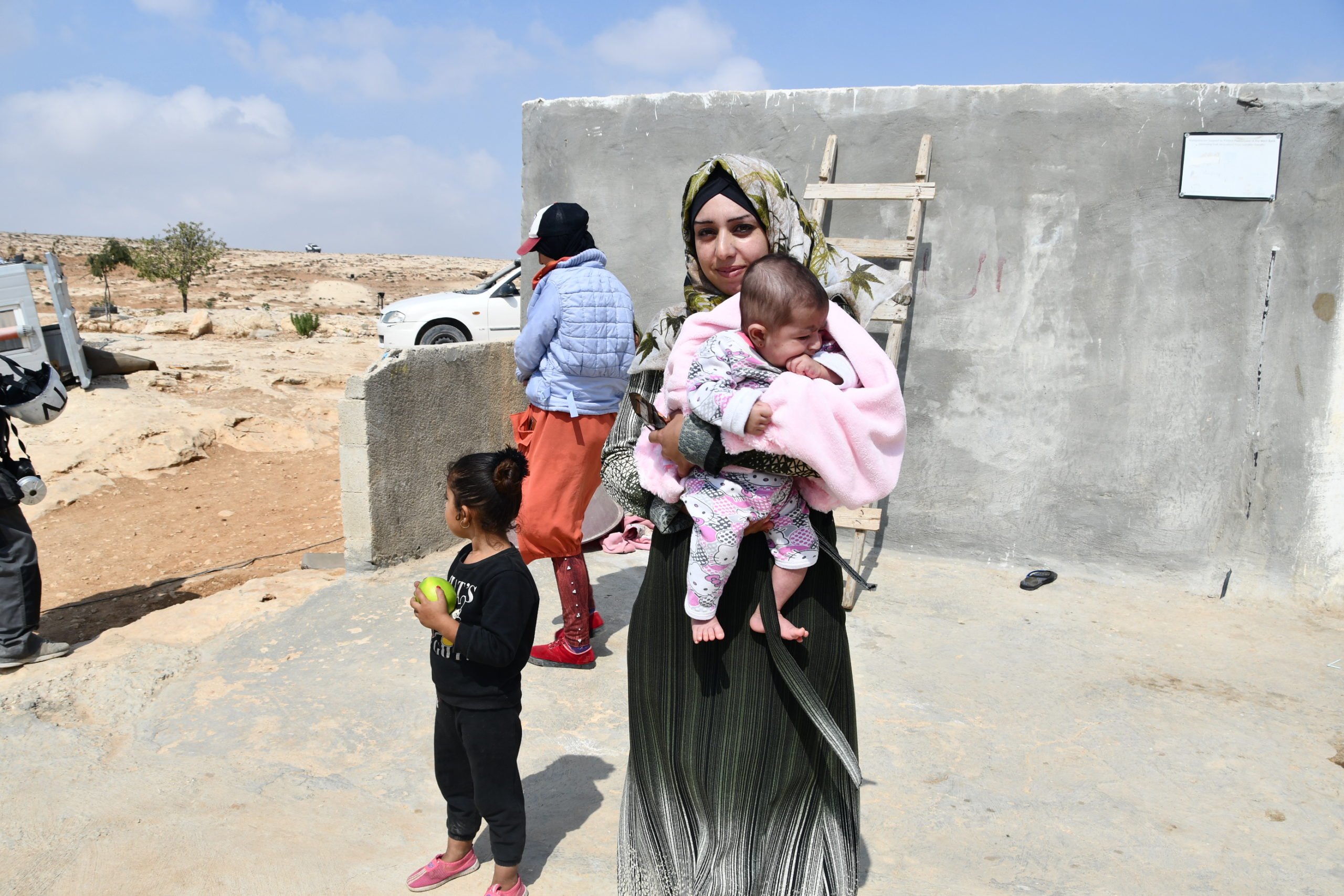 Sabreen receives 20 liters of water (about 5 gallons) costing 500 shekels ($155) from At-Tuwani, or she sources water from a nearby aquifer. That same amount of water costs nearby Israeli settlers about 100 shekels or $30. Water is stored in a cistern serving 10 people for domestic, agricultural and livestock use and may last between two to four days.

The history of water apartheid

When Israel occupied the West Bank and Gaza after the 1967 war, it took control of the areas’ water resources. The state established pumping quotas and banned construction of new wells in the occupied territories.

The 1995 Oslo II Accord was portrayed as a turning point for water independence in Palestine. The Palestinian Water Authority (PWA) and Israeli-Palestinian Joint Water Committee were created but Israel retained control of the flow and volume of water given to the oPT. Despite the name, the PWC doesn’t oversee water resources. Instead its role is to distribute the limited water supply Israel provides.

The agreement was supposed to last only five years but remains in effect today. Under the initiative, 80 percent of the West Bank’s water is for Israeli use and 20 percent is for Palestinian use. Israelis also enjoy an unlimited supply of water while Palestinians have their supply restricted.

What was billed as a cooperative venture between Palestine and Israel is merely the occupation of water in disguise.

“There are no official meetings between the Palestinans and the Israelis because the Israelis don’t consider us as a counterpart,” Dr. Abdelrahman Al Tamimi, PHG’s director, said.

The Coordinator of Government Activities in the Territories (COGAT) nonetheless told MintPress that the Palestinian Authority is responsible for providing water to the West Bank and touted collaboration between Palestine and Israel.

“Master programs are being promoted in the area of Judea and Samaria [West Bank], which will address the water supply until the years 2040-2050, to all populations in the area. We will note that these programs are being coordinated with the Palestinian Water Authority and [have] even been shifted in light of its requests,” a COGAT spokesperson said.

“The only solution for lack of water is water”

Dr. Al Tamimi outlined the three main reasons for water scarcity in the oPT — all originating from Israel’s occupation.

First, Israel has not increased the West Bank’s water quota to meet the demands of its rapidly growing population, which is now nearly double what it was in 1995. Al Tamimi explained Israel only increased the commercial consumption (about 10-12 percent of the demand) to around 160 million gallons.

Al Tamimi added that the Oslo II Accord doesn’t allow for Palestinians to do groundwater drilling — eliminating this as a possible water resource. And finally, owing to Israeli military control of Area C of the West Bank, Palestinians are often blocked from developing wells and springs in the region.

Al Tamimi explained these three main factors have intensified the water crisis, specifically in remote Palestinian communities, noting “Some villages in the south of Hebron or north of Jenin receive water twice a month or once a week.”

Water access varies by region in the West Bank. Urban and developed areas have running water while villages Israel prevents from connecting to a water grid rely mostly on costly trucks delivering water that is then stored in black and white tanks on people’s roofs.

“When water is moved from place to place, it’s vulnerable to pollution,” Al Tamimi said. “Because you cannot guarantee the cleanliness of the truck, how they pumped water from the well to the truck and how they empty the trucks. Water is vulnerable to be polluted by air, by bacteria and by other things.”

“The problem is there is no monitoring and there is no authority controlling the quality of water in Area C,” he added.

Palestinians also have to pay a relatively high price for potentially unsafe water. Tanker prices increase when transported on rough terrain — another infrastructural problem, caused by Israel forbidding these communities to pave their roads.

“According to international standards, the average cost of the water bill should not be more than 1 percent of that family’s income. But in some Palestinian villages, they pay more than 10 or 12 percent of their income just to purchase the water,” Al Tamimi said. “The only solution for lack of water is water. There are no other alternatives.”

Access to water in Area C is exacerbated by Israel’s systematic policy of demolishing and confiscating water equipment and resources. Italian NGO WeWorld reported nearly 10 percent of the buildings demolished by Israeli forces in 2020 were water, sanitation and hygiene structures.

The Military Commander of the West Bank justifies these practices by saying that the Palestinian communities in Area C did not receive building permits; however, the Israeli government’s own policy does not allow Palestinians to obtain building permits in this area. At the same time, all the Israeli outposts and settlers who live in buildings without legal permits are allowed to connect to the water grid. 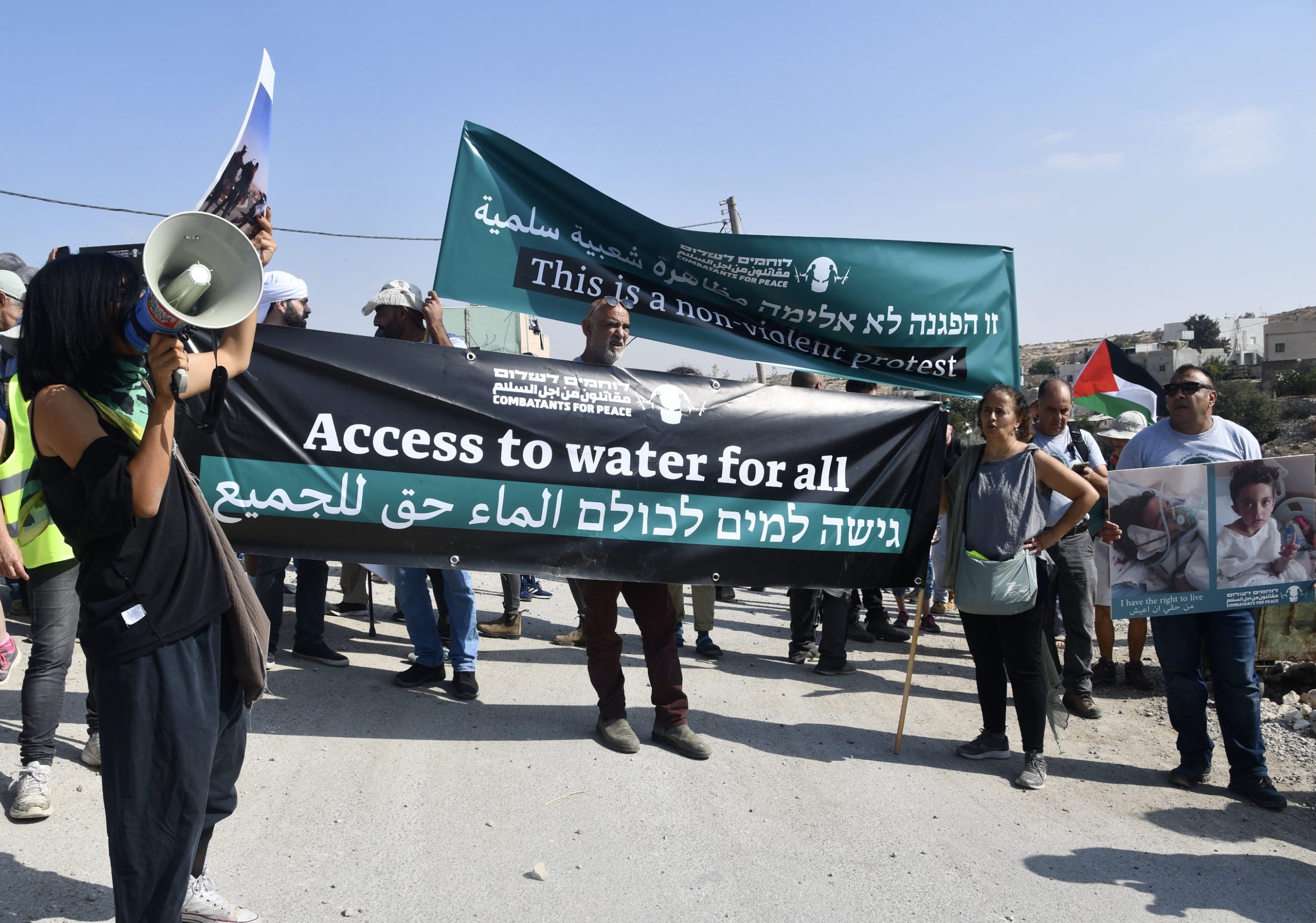 Activists from the Israeli organization Combatants for Peace hold a banner demanding water for all.

For CFP’s Rabee, water deprivation in Area C highlights the severe discrimination Israel perpetuates. “The Palestinian man can only get water three days a week. And then this illegal outpost next to it has running water,” Rabee said. “So it’s just a very stark example of apartheid.”

Headline photo: Palestinian children play by a new water tank that replaced a damaged one following a settlers’ attack in the West Bank village of Mfakara, September 30, 2021. Nasser Nasser | AP

Jessica Buxbaum is a Jerusalem-based journalist for MintPress News covering Palestine, Israel, and Syria. Her work has been featured in Middle East Eye, The New Arab and Gulf News. 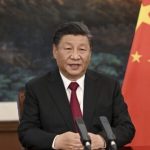 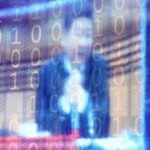