Washington steps up aggression against Russia with attacks against consulates and diplomats in the U.S.

September 2, 2017
New Cold War.org, Sept 2, 2017. Three news articles from RT.com are enclosed. Also enclosed is the statement of the Ministry of Foreign Affairs of the Russian Federation delivered to the deputy chief of mission of the U.S. embassy in Moscow upon being summoned on Sept 2, 2017. 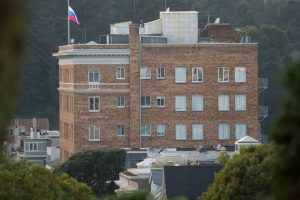 The Russian Consulate in San Francisco, as well as two annex buildings in Washington and New York, will have to close by September 2, the U.S. State Department announced in response to Moscow ordering the U.S. to reduce its diplomatic personnel in Russia.

“We are requiring the Russian Government to close its Consulate General in San Francisco, a chancery annex in Washington, D.C., and a consular annex in New York City,” State Department spokeswoman Heather Nauert said in a statement on Thursday, August 31.

“We want to halt the downward spiral and we want to move forward towards better relations, we look for opportunities to do that, but we also want to have equity in the decisions… We’re also going to make sure that we make decisions that are best for our country,” Sanders told reporters.

Russia will still have more diplomatic and consular annexes than the U.S., a senior administration official told reporters earlier in a telephone briefing.

The closures will not lead to Russian diplomats being expelled, the official said, adding that diplomatic staff who have been assigned to the mission in San Francisco can be moved to other posts in the U.S. Ownership of the closed facilities will be retained by Moscow, but Russia will not be allowed to carry out diplomatic activities there.

Russian Foreign Minister Sergey Lavrov was informed of Washington’s latest move by U.S. Secretary of State Rex Tillerson in a phone call. Lavrov “expressed regret over the escalation of tensions” in the relations between the two countries, which were not initiated by Russia.

Lavrov told his U.S. counterpart that Moscow would “closely study” the new U.S. measures and would then inform Washington of its reaction.

The Russian Consulate-General in San Francisco has called the decision “another unfriendly step of the U.S. authorities, which, first of all, will hit hard on Russian citizens residing in the consular district, as well as on American citizens.”

Russia’s consul-general in San Francisco, Sergey Petrov, said Washington’s decision will harm both Russian and American citizens living in the U.S. region. “Americans have often addressed our consulate with many issues, including to apply for a Russian visa,” the diplomat told RIA Novosti.

The consulate handled work from seven western states, and was the oldest and most established of Russia’s consulates in the U.S. In addition to the embassy in Washington, there are three other consulates – in New York, Seattle and Houston.

In late July, the Russian Foreign Ministry announced that Moscow told Washington to reduce the number of its diplomatic staff in Russia to 455 people. The order came following the U.S. Congress’ approval of new sanctions against Russia and aimed to equalize the number of both countries’ diplomatic staff by September 1. As a result, the U.S. Embassy staff in Russia was cut by 755.

In its August 31 statement, the State Department said it had “fully implemented” Moscow’s decision but called Russia’s move “unwarranted and detrimental to the overall relationship between our countries.” It said, further, “the U.S. hopes that… we can avoid further retaliatory actions by both sides and move forward” with improving relations and cooperation between the two nations.

Note by New Cold War.org:
The hostile move by Washington belies the year-long propaganda narrative in Western media of friendly ties between the Trump-led U.S. administration and Russia. But the New York Times persists, adding this propaganda spin to its reporting of the closure of the Russian consulate in San Francisco:

Russia also has consulates in New York, Houston and Seattle. But San Francisco is second only to New York in value to the Russians because of its proximity to Silicon Valley, said Evelyn Farkas, the Pentagon’s top Russia policy official in the Obama administration. In addition to corporate espionage, analysts said, the consulate could help further Russia’s hacking efforts in the United States…

Supporters of Russia who, for their own reasons, naively believed that Donald Trump was interested in improved relations with Russia, are left pondering this latest in a string of hostile moves by the Trump-led administration.

Russia’s foreign ministry has said U.S. security services intend to conduct searches in the building of the Russian consulate in San Francisco on September 2.

“Alongside the yet another raid on expensive objects of Russian state property, which [the U.S.] have blocked and are now persistently offering us to put on sale, this time the orders of the U.S. authorities pose a direct threat to security of Russian citizens” in the U.S., ministry spokeswoman Maria Zakharova said in a statement.

The searches will not only be carried out at Russia’s consulate offices but also at the apartments of staff who live in the building and who have immunity, she said.

To perform those searches, U.S. authorities have ordered those staff members and their families, including children and babies, to leave their homes for up to 12 hours.

“We are talking about an invasion in the consulate office and homes of diplomatic staff, who themselves are being ousted not to disturb FBI agents,” Zakharova stated.

She pointed out that Moscow was given just two days to close one of its largest consulates which serves the needs of “several densely populated states.” The movements of Russian diplomats and official delegations have also become more stringent, she noted, describing Washington’s latest move as “unprecedented measures on restricting the work” of the Russian diplomatic mission in the U.S.

Tens of thousands of people “who are far from politics” will suffer from Washington’s measures in both countries, Zakharova warned. While the U.S. has previously stopped issuing visas to Russian citizens in U.S. consulates in several major Russian cities, they are now preventing Americans from getting Russian visas in San Francisco.

“It is obvious that the U.S. is not interested in the development of relations between people,” Zakharova said.

Russia has summoned the deputy chief of mission of the U.S. Embassy in Moscow to lodge a note of protest over U.S. plans to search the Russian trade mission in Washington, the Russian Foreign Ministry said.

Anthony F. Godfrey was summoned to the ministry on Saturday, it said in a statement, adding that Russian diplomats have been denied access to the trade mission building despite it being owned by Russia and protected by diplomatic immunity.

“We consider the planned illegal search of Russian diplomatic premises in the absence of Russian officials and the threat we have received to break down the door of the building as an aggressive action, which the U.S. intelligence service may use to orchestrate an anti-Russian provocation by planting compromising items,” the statement said.

Moscow has called on Washington to stop violating international law and refrain from compromising the immunity of Russian missions in the country. Otherwise, retaliation may follow, the ministry warned.

Earlier, the U.S. ordered Russia to shut down its consulate in San Francisco and two auxiliary offices in Washington and New York. On Friday, Russian Foreign Ministry spokesperson Maria Zakharova said the FBI was planning to search the general consulate premises, including homes of the diplomatic staff, which would violate diplomatic immunity.

Former U.S. diplomats, who RT reached out to, questioned the reasons behind the searches, saying it will only lead to a further escalation of tensions.

The U.S. authorities are highly unlikely to find “anything of interest” in the Russian Consulate in San Francisco, as there is probably nothing more than “confidential diplomatic materials,” which are supposed to be there anyway, Ted Seay, a former U.S. diplomat, told RT.

“What are our people going to do in your ambassador’s apartments or in the consulate in San Francisco? Look for illegal recipes for borsch? Of course, you have to respond and to go into our consulate in St. Petersburg – looking for what? Perhaps, for too many copies of Doctor Zhivago in the embassy’s library?” John Graham, former U.S. ambassador to Libya, said.

“This foolishness happens [but] it happens usually at the lower levels,” he added. Meanwhile, Seay warned that “things are already too tense between the two countries” and both sides should proceed with “great care.”

“To me, that means again that anyone who is actually planning to raid diplomatic premises in San Francisco, has lost their mind,” the former U.S. diplomat said.

A diplomatic row between Moscow and Washington broke out in late 2016, triggered by former U.S. President Barack Obama, who expelled 35 Russian diplomats and their families, as well as confiscating two Russian diplomatic compounds just before New Year’s Day. The former president accused the diplomats of intelligence activities as well as accusing Russia of interfering in the 2016 U.S. presidential election, even though no evidence has ever been made public.

At that time, the Kremlin denied the accusations and denounced Washington’s actions as a “witchhunt.” However, Moscow did not take any retaliatory measures, as it was hoping to restore relations with the U.S. under the incoming president, Donald Trump.

However, the issue regarding the Russian diplomatic property confiscated in December 2016 has never been addressed by the new administration. In July, the U.S. Congress adopted new legislation that limited President Trump’s ability to formulate foreign policy towards Russia by barring him from easing sanctions on Russia without congressional approval. The new legislation also imposed new unilateral sanctions on Moscow.

This move prompted the Kremlin to finally hit back by ordering the U.S. State Department to limit the number of personnel in Russia and to bring it in line with the number of Russian diplomatic staff in the U.S. Moscow also ordered Washington to suspend use of a warehouse and a suburban residence in the Russian capital by U.S. mission staff.

Washington responded in late August by announcing the closure of consulates in St. Petersburg, Yekaterinburg, and Vladivostok and suspending all “non-immigrant visa operations” in Russia until September. It also added that visa operations would be resumed only at the main embassy building in Moscow.

On August 31, the Trump administration also ordered the closure of Russia’s consulate in San Francisco, California and two diplomatic annexes in Washington and New York City.

Published on the website of the Ministry of Foreign Affairs of the Russian Federation, Sept 2, 2017

Minister Counselor of the U.S. Embassy in Moscow Anthony Godfrey was summoned to appear at the Russian Foreign Ministry on September 2. He was handed a note of protest regarding the U.S. authorities conducting a search of Russia’s Trade Representation office in Washington, access to which has been closed to us as of today, although this building is in Russia’s state ownership and has diplomatic immunity status.

It is underlined in the note that we consider the illegitimate search of the Russian premises without the presence of Russian officials and the expressed threat to break down the entrance door as an unprecedented, aggressive act, which could be used by U.S. special services to stage an anti-Russian provocation by planting compromising items.

The U.S. authorities must stop these crude breaches of international law and cease encroaching on the immunity of Russian diplomatic missions. Otherwise we reserve the right to take retaliatory measures based on the principle of reciprocity.