After publishing a McCarthyistic “black list” that smears some 200 websites as “Russian propagandists,” The Washington Post refuses to apologize — and other mainstream media outlets pile on, writes Norman Solomon. 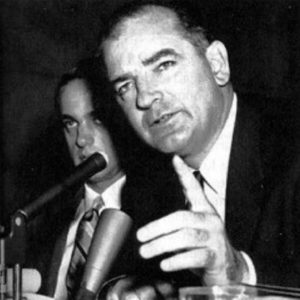 We still don’t have any sort of apology or retraction from the Washington Post for promoting “The List” — the highly dangerous blacklist that got a huge boost from the newspaper’s fawning coverage on Nov. 24. The project of smearing 200 websites with one broad brush wouldn’t have gotten far without the avid complicity of high-profile media outlets, starting with the Post.

On Thursday — a week after the Post published its front-page news article hyping the blacklist that was put out by a group of unidentified people called PropOrNot — I sent a petition statement to the newspaper’s executive editor Martin Baron.

“Smearing is not reporting,” the RootsAction petition says. “The Washington Post’s recent descent into McCarthyism — promoting anonymous and shoddy claims that a vast range of some 200 websites are all accomplices or tools of the Russian government — violates basic journalistic standards and does real harm to democratic discourse in our country. We urge the Washington Post to prominently retract the article and apologize for publishing it.”

After mentioning that 6,000 people had signed the petition (the number has doubled since then), my email to Baron added: “If you skim through the comments that many of the signers added to the petition online, I think you might find them to be of interest. I wonder if you see a basis for dialogue on the issues raised by critics of the Post piece in question.”

The reply came from the newspaper’s vice president for public relations, Kristine Coratti Kelly, who thanked me “for reaching out to us” before presenting the Post’s response, quoted here in full:

“The Post reported on the work of four separate sets of researchers, as well as independent experts, who have examined Russian attempts to influence American democracy. PropOrNot was one. The Post did not name any of the sites on PropOrNot’s list of organizations that it said had — wittingly or unwittingly — published or echoed Russian propaganda. The Post reviewed PropOrNot’s findings and our questions about them were answered satisfactorily during the course of multiple interviews.”

But that damage-control response was as full of holes as the news story it tried to defend.

For one thing, PropOrNot wasn’t just another source for the Post’s story. As The New Yorker noted in a devastating article on Dec. 1, the story “prominently cited the PropOrNot research.” The Post’s account “had the force of revelation, thanks in large part to the apparent scientific authority of PropOrNot’s work: the group released a 32-page report detailing its methodology, and named names with its list of 200 suspect news outlets…. But a close look at the report showed that it was a mess.”

Contrary to the PR message from the Post vice president, PropOrNot did not merely say that the sites on its list had “published or echoed Russian propaganda.” Without a word of the slightest doubt or skepticism in the entire story, the Post summarized PropOrNot’s characterization of all the websites on its list as falling into two categories: “Some players in this online echo chamber were knowingly part of the propaganda campaign, the researchers concluded, while others were ‘useful idiots’ — a term born of the Cold War to describe people or institutions that unknowingly assisted Soviet Union propaganda efforts.”

As The New Yorker pointed out, PropOrNot’s criteria for incriminating content were broad enough to include “nearly every news outlet in the world, including the Post itself.” Yet “The List” is not a random list by any means — it’s a targeted mish-mash, naming websites that are not within shouting distance of the U.S. corporate and foreign policy establishment.

And so the list includes a few overtly Russian-funded outlets; some other sites generally aligned with Kremlin outlooks; many pro-Trump sites, often unacquainted with what it means to be factual and sometimes overtly racist; and other websites that are quite different — solid, factual, reasonable — but too progressive or too anti-capitalist or too libertarian or too right-wing or just plain too independent-minded for the evident tastes of whoever is behind PropOrNot.

As The New Yorker’s writer Adrian Chen put it: “To PropOrNot, simply exhibiting a pattern of beliefs outside the political mainstream is enough to risk being labeled a Russian propagandist.” And he concluded: “Despite the impressive-looking diagrams and figures in its report, PropOrNot’s findings rest largely on innuendo and conspiracy thinking.”

As for the Post vice president’s defensive phrasing that “the Post did not name any of the sites on PropOrNot’s list,” the fact is that the Post unequivocally promoted PropOrNot, driving web traffic to its site and adding a hotlink to the anonymous group’s 32-page report soon after the newspaper’s story first appeared. As I mentioned in my reply to her: “Unfortunately, it’s kind of like a newspaper saying that it didn’t name any of the people on the Red Channels blacklist in 1950 while promoting it in news coverage, so no problem.”

As much as the Post news management might want to weasel out of the comparison, the parallels to the advent of the McCarthy Era are chilling. For instance, the Red Channels list, with 151 names on it, was successful as a weapon against dissent and free speech in large part because, early on, so many media outlets of the day actively aided and abetted blacklisting, as the Post has done for “The List.”

Consider how the Post story described the personnel of PropOrNot in favorable terms even while hiding all of their identities and thus shielding them from any scrutiny — calling them “a nonpartisan collection of researchers with foreign policy, military and technology backgrounds.”

So far The New Yorker has been the largest media outlet to directly confront the Post’s egregious story. Cogent assessments can also be found at The Intercept, Consortium News, Common Dreams, AlterNet, Rolling Stone, Fortune, CounterPunch, The Nation and numerous other sites.

But many mainline journalists and outlets jumped at the chance to amplify the Post’s piece of work. A sampling of the cheers from prominent journalists and liberal partisans was published by FAIR.org under the apt headline “Why Are Media Outlets Still Citing Discredited ‘Fake News’ Blacklist?”

FAIR’s media analyst Adam Johnson cited enthusiastic responses to the bogus story from journalists like Bloomberg’s Sahil Kupar and MSNBC’s Joy Reid — and such outlets as USA Today, Gizmodo, the PBS NewsHour, The Daily Beast, Slate, AP, The Verge and NPR, which “all uncritically wrote up the Post’s most incendiary claims with little or minimal pushback.” On the MSNBC site, the Rachel Maddow Show’s blog “added another breathless write-up hours later, repeating the catchy talking point that ‘it was like Russia was running a super PAC for Trump’s campaign.’”

With so many people understandably upset about Trump’s victory, there’s an evident attraction to blaming the Kremlin, a convenient scapegoat for Hillary Clinton’s loss. But the Post’s blacklisting story and the media’s amplification of it — and the overall political environment that it helps to create — are all building blocks for a reactionary order, threatening the First Amendment and a range of civil liberties.

When liberals have green-lighted a witch-hunt, right wingers have been pleased to run with it. President Harry Truman issued an executive order in March 1947 to establish “loyalty” investigations in every agency of the federal government. Joe McCarthy and the era named after him were soon to follow.

In media and government, the journalists and officials who enable blacklisting are cravenly siding with conformity instead of democracy.

Norman Solomon is co-founder of the online activist group RootsAction.org. His books include War Made Easy: How Presidents and Pundits Keep Spinning Us to Death. He is the executive director of the Institute for Public Accuracy. The above article also appears in CounterPunch, on Dec 6, 2016.