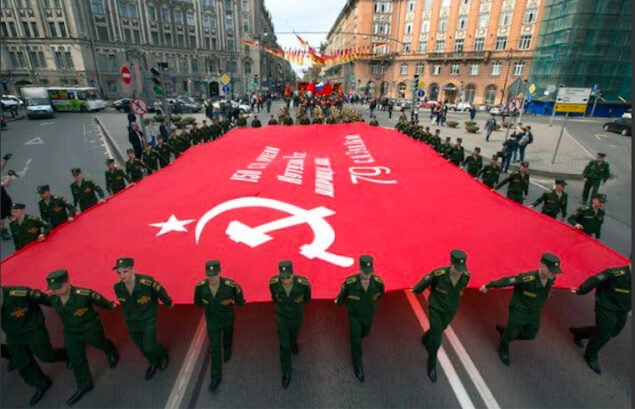 Banner celebrating Soviet victory over Nazi Germany to mark the 70th anniversary of V-E Day on May 9, 2015. [Source: nytimes.com]

Claims that glorification of Soviet Russia’s role in victory over Nazis is part of “official propaganda.”

On May 9, 2021, Russians celebrated Victory in Europe (V-E) Day with a customary parade honoring the sacrifices of the Soviet people in World War II.

Rather than reporting on the day’s festivities, The Washington Post ran a story by its Moscow bureau chief, Robyn Dixon, about a Russian man who has spent years digging into archives to find out who killed his great-grandfather in 1938 during purges led by Soviet ruler Joseph Stalin.

Noting that “digging up the truth from the past can still bring trouble in today’s Russia,” Dixon wrote that, under current Russian President Vladimir Putin, “official propaganda has sought to glorify Russia as a victim of foreign aggression that saved the world in World War II, meanwhile playing down the horrors of Soviet massacres and repressions including the ‘Great Terror’ that Stalin led in the 1930s.”[1]

Dixon’s remarks represent historical revisionism at its worst; whatever the truth about the latter claim, Russia was a victim of foreign aggression and did save the world from Nazism in World War II. 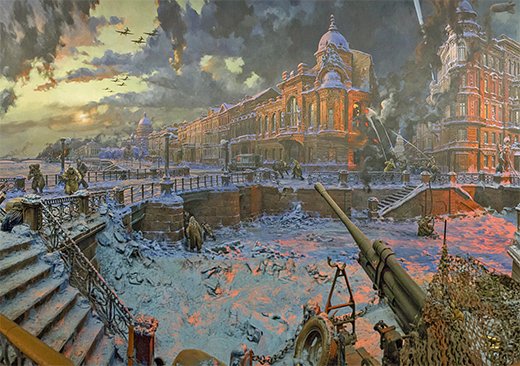 Painting in Moscow’s World War II museum depicting the Nazi siege of Leningrad which resulted in the deaths of 632,253 civilians. [Source: bridgetomoscow.com]

General Douglas MacArthur stated that in none of the many wars he had participated in had he observed “such an effective resistance to the heaviest blows of a hitherto undefeated enemy, followed by a smashing counterattack which is driving the enemy back to his own land. The scale and grandeur of this effort marks it as the greatest military achievement in all of history.”[3]

Churchill wrote in a letter to Stalin on September 27, 1944, that “it is the Russian army that tore the guts out of the German military machine.” Roosevelt in a fireside chat told the American public two years earlier that “these Russian forces have destroyed and are destroying more armed power of our enemies—troops, planes, tanks and guns—than all the other united nations put together.”[5] 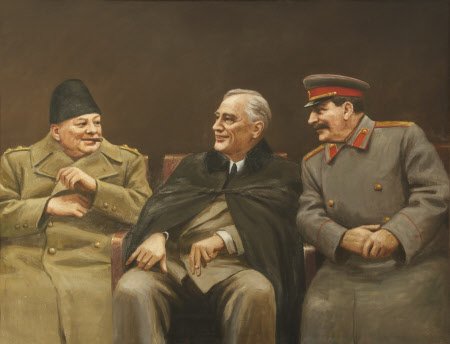 A generation later, President John F. Kennedy, in a speech at the American University in Washington, D.C., on June 10, 1963, five months before his assassination, stated that “no nation in the history of battle has every suffered more than the Russians suffered in the course of World War II. At least twenty million lost their lives. Countless millions of homes and farms were burned or sacked. A third of the nation’s territory, including nearly two-thirds of its industrial base, were turned into a wasteland.”[6] 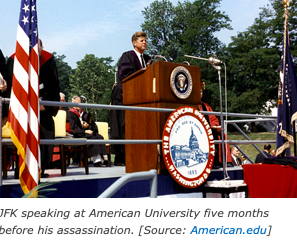 But Robyn Dixon and The Washington Postwould like us to believe that it is propaganda for Putin to highlight Russia’s role as a victim of foreign aggression and engine of Nazism’s defeat. 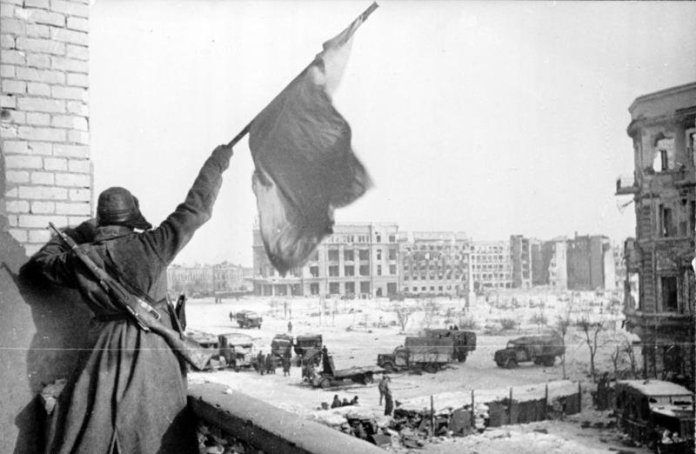 Russian soldier waves the red banner near the central plaza of Stalingrad after the defeat of the Nazis in the winter of 1943. [Source: origins.osu.edu]

Or that it was Russian Red Army troops that liberated many of the concentration camps where Jews were systemically slaughtered, including Auschwitz. 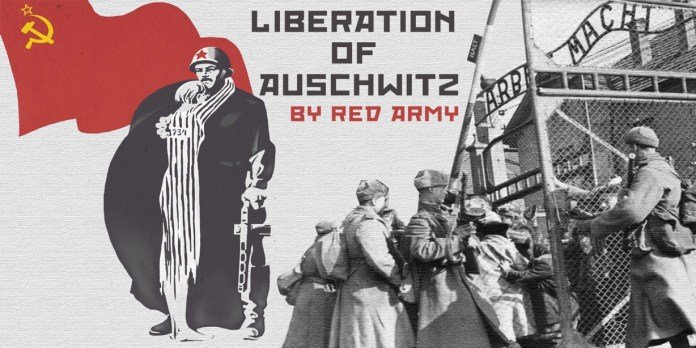 The New Republic at the time declared that “Hitler has lost the war, and for this the Russians deserve the major share of the credit.”[8]

New York Times correspondent Ralph Parker proclaimed that “it would need a Tolstoy to describe the heroic endurance of the men and women [successfully fighting the Nazis].”[9] 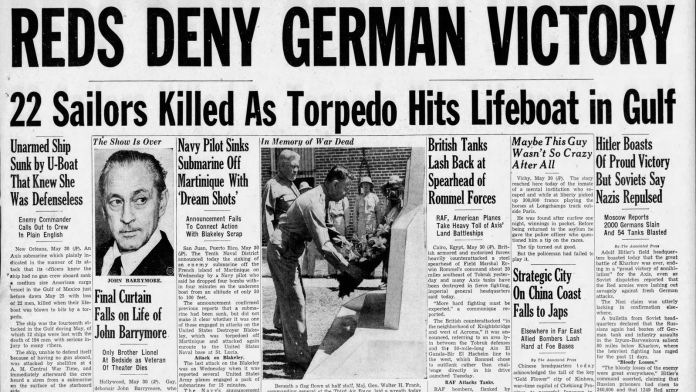 But this kind of reporting would be heresy today in the age of Russia-Gate and the new Cold War, where nothing positive can be said about Russia.

Robyn Dixon is an Australian who won an Associated Press award for a series on terrorism that ignored its state-sponsored variety.

She has served as a loyal foot soldier in the anti-Russia, anti-Putin campaign, which was initiated because Russia has become stronger and more independent under Putin than under Boris Yeltsin in the 1990s. 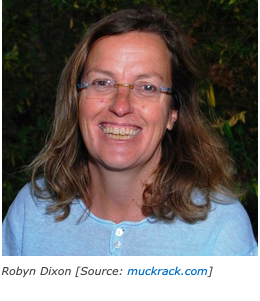 Dixon’s articles on Russia are one-sided and biased.

She portrays Putin as an authoritarian leader bent on establishing a totalitarian surveillance state like China,[10] subverting sovereign countries and promoting militarism.[11]

She never mentions Russia’s positive economic transformation since the 1990s or from whom Putin draws his support.

In Syria, Dixon casts Russia as an aggressor bent on retaining two military bases (Hmeimim Air Base and the Tartus Naval Base), and which carried out war crimes in conjunction with Syrian leader Bashir al-Assad.[12]

No mention is made of the crimes committed by the jihadist rebels backed by the CIA, nor of the U.S. desire to control the oil resources and its establishment of 11 military bases in Syria.[13]

For Ukraine, Dixon depicts Russia again as the aggressor[14] without addressing Western support for the 2014 coup d’état which imposed a hostile regime on Russia’s border that wanted to join the North Atlantic Treaty Organization (NATO), and provoked the secession of two eastern Ukrainian provinces by imposing draconian language laws on them.[15]

For months, Dixon has reported favorably on Russian opposition leader Alexei Navalny—leaving out his anti-immigrant and other regressive views, and the fact that he has extremely limited support within Russia.[16] 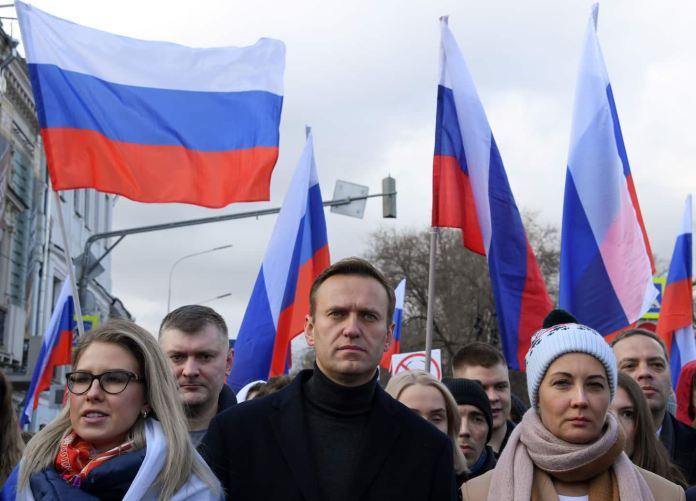 Alexei Navalny leads an anti-Putin protest. Dixon’s reporting has helped lionize him in the U.S. but he has limited support within Russia and regressive views on many issues. [Source: washingtonpost.com]

She left out that Bellingcat is an adjunct of Western intelligence agencies and proved only that Navalny had been trailed by secret service agents.[17] 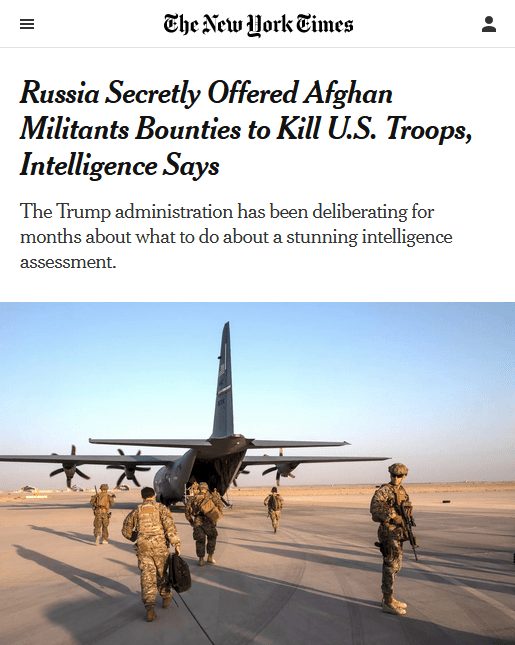 Dixon also accused Russia of setting off explosives at a weapons depot in Bulgaria and in the Czech Republic nearly a decade ago to disrupt Western flows of arms to Georgia and Ukraine.

She did not, however, report on allegations by Belarus President Alexander Lukashenko that he was a victim of a Western-backed coup and assassination plot.[19]

This is not surprising because Dixon has championed the anti-Lukashenko opposition and has caricatured Lukashenko as a tin-pot dictator[20] –ignoring how he had built a strong base of support by resisting Western-imposed shock therapy programs that resulted in record inequality levels throughout the region.[21] 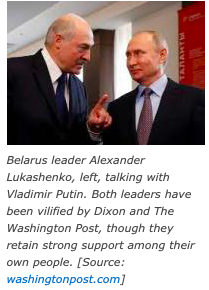 On April 28th, Dixon co-authored a front-page story entitled “Brazil Rejects Russian Vaccine, Citing Many ‘Flaws,’” which upheld the Brazilian health agency’s view that the Sputnik V COVID-19 vaccine lacked proper quality control, even though it had been hailed as safe and more than 91 percent effective in a peer-reviewed article in The Lancet in February.[22]

Dixon’s article was characteristic of a biased manner of reporting in which only negative things can be said about Russia, and Russia’s positive contributions—like development of a COVD-19 vaccine or defeat of Nazism in World War II—are dismissed.

In surveying Dixon’s articles on Russia for The Washington Post, I came across one positive piece that provided a startling contrast to her V-E Day article from this year.

Published on August 5, 2020, the piece was titled “The last of Stalin’s female fliers.” It profiled Galina Brok-Beltsova, age 95, the last surviving member of Stalin’s three famous all-female air regiments, who took part in the 1945 Battle of Königsberg, which liberated Germany’s easternmost city from Nazi rule. 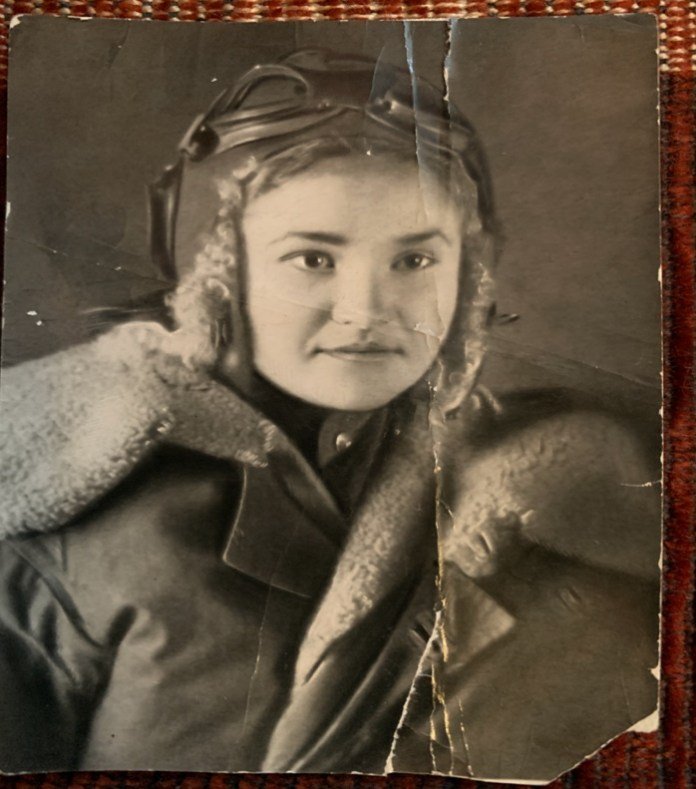 Dixon told the story in the article of how Brok-Beltsova signed up for the Red Army after coming out of a movie theater with her girlfriends and hearing an air-raid siren.

In basic training, she slept in “freezing, filthy stables” in preparation to “fight the invading Nazis,” meeting her husband of 60 years who was in charge of her training regimen.

Brok-Beltsova admitted that the Soviet Air Force decimated much of Königsberg but said that this was because the Germans had tried to “destroy us and occupied our villages and towns.”

After the war Brok-Beltsova became a history professor and spoke at military events where the young officers marveled at her courage.

On Victory Day in 2020, she was invited to a luncheon with Putin, though the festivities were canceled because of COVID-19. Dixon wrote that for Brok-Beltsova nevertheless, “Victory Day carries the same message of glory, triumph and grief it always has.”[23]

The Russian people clearly revere veterans like Brok-Beltsova whose heroism and sacrifices were genuine.

The worst of Dixon’s reporting on Russia is unfortunately no anomaly at The Washington Post.

During the 2016 election, the Post led the way in accusing Russia of election interference and cyber-hacking absent concrete proof, and in 2020 insinuated that Bernie Sanders was a Russian asset based on the claims of anonymous intelligence sources notorious for advancing disinformation. 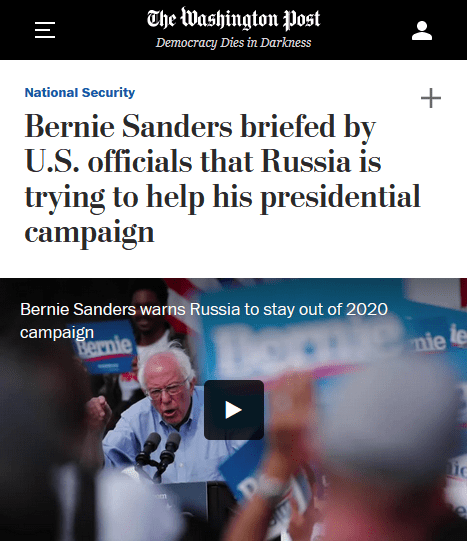 Since 2013, The Washington Post has been owned by Amazon CEO Jeff Bezos, a multibillionaire who signed a $600 million computing deal between the Central Intelligence Agency (CIA) and Amazon. 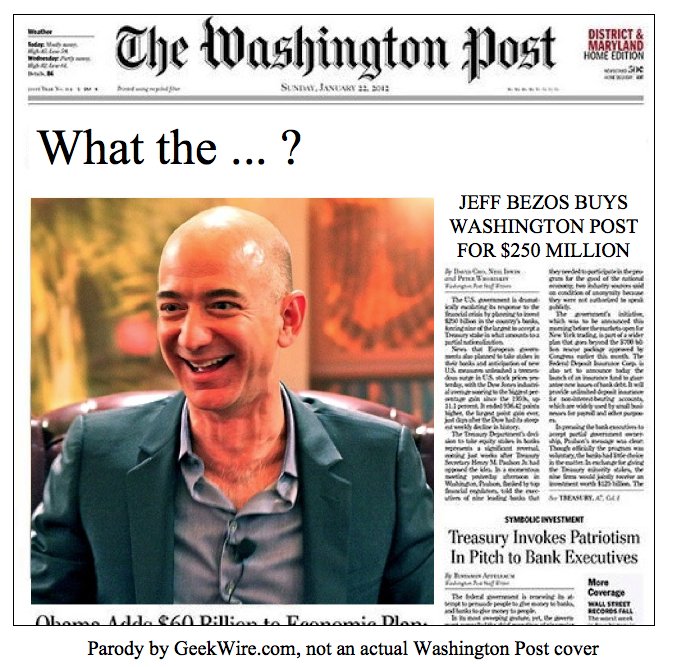 Bezos’s warm relationship with the CIA, combined with the Post’s reporting on Russia, indicates a pattern of continuity from the original Cold War when Carl Bernstein reported that more than 400 American journalists had “secretly carried out assignments for the CIA.”

Dixon may or may not herself be compromised but her reporting clearly serves the interests of the U.S. national security state, and has contributed to negative public attitudes toward Russia, which are lending support for the new Cold War.

A recent Gallup poll found that just 22% of U.S. citizens view Russia favorably, while 72% hold unfavorable views toward it.

Democrats—more prone to read the Post—hold particular hostility toward Russia, with fewer than one-in-six (16%) telling Gallup they maintained positive opinions about the country, as opposed to 25% of Republicans and 24% of independents.

These totals indicate a high level of social conditioning whose end result could be war.

Jeremy Kuzmarov is Managing Editor of CovertAction Magazine. He is the author of four books on U.S. foreign policy, including Obama’s Unending Wars (Clarity Press, 2019) and The Russians Are Coming, Again, with John Marciano (Monthly Review Press, 2018).