While all eyes are on Syria, there has been a steady deterioration of the situation in Ukraine. In violation of the ceasefire, shelling of the territories of the two people’s republics has resumed and the Organisation for Security and Cooperation in Europe (OSCE) has confirmed that the Ukrainian military has moved heavy weapons back to the contact line. 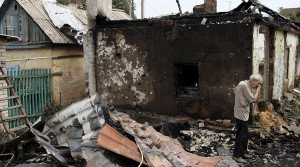 The Ukrainians, meanwhile, have extended their ban of commercial flights to and from Russia by banning also transit flights. Ukraine has placed Crimea under food blockade. To the intense embarrassment of its Western backers (see this editorial in the Financial Times, headlined ‘Kiev should act to end the blockade of Crimea’) it has enlarged this to an energy blockade.

Ukraine claims the power lines to Crimea were destroyed by Crimean Tatar “activists” backed by Right Sector. Even if this were true, the Ukrainian authorities have done little or nothing to take control of the situation, arrest and punish those responsible for what was after all an act of criminal damage, or carry out the necessary repairs.

Characteristically, most Western governments have said nothing, save that there has been some muted criticism from Germany.

Contrast this silence with the furious – and wrong – accusations regularly made in the West against Russia for its supposed use of energy as a political weapon.

All of this is happening to a drumbeat of demands in the Ukrainian media for the country to renounce the Minsk II agreement.

The Russians, for their part, have responded by stopping coal supplies to Ukraine. Since Ukraine is again failing to pay for its gas, it seems the Russians intend to stop supplying Ukraine with gas on Tuesday. The two people’s republics of Donetsk and Lugansk have also announced they are stopping their own coal deliveries to Ukraine.

These steps increase the prospects of severe power shortages in Ukraine during what is predicted to be a harsh winter.

Beginning January 1, the Russians are also to impose sanctions on Ukrainian food imports to Russia. This is in retaliation to Ukraine joining EU sanctions against Russia and imposing sanctions of its own.

Bizarrely, this systematic severing of trade links with Russia is being hailed in parts of the Western media as proof Ukraine is “successfully reorienting” its trade to the EU and away from Russia, and is becoming “less dependent” on Russia. This, of course, takes no account of the damage these actions are doing to Ukraine’s economy.

There has also been an orchestrated attempt in recent weeks on the part of some sections of the Western media to talk up Ukraine’s economic situation, with claims that it is “stabilising”. The U.S. credit agency Moody’s has joined in the game by upgrading Ukraine’s credit rating.

To the very limited extent this is true, it is wholly the consequence of the August ceasefire, which stopped the drain on the civilian economy of fighting the war. The actions the Ukrainian government and “activists” have been taking over the last few weeks put this in jeopardy.

What is causing this sudden deterioration in the situation? At its simplest, it is growing alarm in Ukraine that Western – especially European – support for Ukraine is flagging.

It is now widely accepted that Merkel and Obama are becoming increasingly isolated in their insistence that the sanctions against Russia be extended.  In France, Nicholas Sarkozy, Hollande’s likely conservative opponent at the Presidential election, has clearly signalled his opposition to sanctions, aligning himself on this issue with Marine Le Pen.

More to the point in Germany, Merkel’s coalition partners – the SPD and the CSU – are both becoming openly critical of a sanctions policy with which one senses they both privately always disagreed.

Russia Insider has already discussed the increasingly rebellious line being taken by Sigmar Gabriel, the SPD’s leader and Germany’s Vice Chancellor. Possibly even more important is the call from Horst Seehofer, leader of the CSU – the CDU’s right wing coalition partner in Merkel’s coalition – for a rapprochement with Russia. Whilst Seehofer’s comments seem to have been specifically triggered by the migrant crisis and the conflict in Syria, their tone suggests a wider rapprochement.

Interestingly, Seehofer has been forging increasingly close links in recent weeks with Hungarian Prime Minister Viktor Orban – a bete noir in Washington – who is known to be a strong advocate of good relations between Europe and Russia. Back in September – as the migrant crisis was starting to spiral out of control – Orban made another call for a new relationship between Europe and Russia. Significantly, he did this straight after a meeting with Seehofer.

The mounting opposition in Europe to the sanctions is being picked up by the “realists” in the U.S. Russia Insider recently republished an article from The National Interest – the main publication in which the U.S. foreign policy “realists” express their views – which should be read as a call to the Obama administration to take the lead in diplomatic discussions with Moscow before the sanctions regime collapses, leaving the U.S. looking isolated and humiliated.

A number of our readers misunderstood this article, taking literally its ritual claims about the sanctions’ effectiveness and Putin’s supposedly “desperate situation”. The sad truth about policy debate in the U.S. today is that it cannot admit defeat, so that even when it retreats it has to claim “victory”.

The key point about the article in The National Interest is not what it says about Putin and Russia. It is its call for the U.S. to initiate diplomatic negotiations with Moscow to find a face-saving way to end the sanctions before Europe splits away and they fall apart.

The gradual shift towards an improvement in relations with Russia began before Russia’s intervention in Syria. In fact, it has been underway ever since the Minsk II agreement was reached in February. We have discussed the process at length in various articles here on Russia Insider. However, the Russian intervention in Syria and the Paris attacks have markedly accelerated the process, with Western public opinion showing increasing signs of backing Russia.

All of this is causing growing alarm in Ukraine. The Ukrainians must be seething as international attention is refocusing away from them and as Russia shows signs of winning over Western public opinion to its side. The consistent response of the Maidan movement whenever it senses it is losing is to double down and escalate and that is what we are now seeing.

A way to rationalise it would be to say that the Ukrainians are trying to provoke Russia into an overreaction, so as to reignite the conflict in order to shore up Western support and get the sanctions – due for renewal in December – extended.

Though this is at a certain level true, it seriously underestimates the purely visceral aspect in Ukrainian behaviour. For the Maidan movement, any sign Russia is gaining credit with the Western public is like a red rag to a bull. There is no need to look for calculation in Ukrainian behaviour in order to understand it.

The underlying problem – as we have said many times – is that the Maidan movement is inherently incapable of the sort of compromise that Minsk II envisages. To see how that is so, consider what has happened since the October summit in Paris where the Europeans in effect ordered Poroshenko to implement Minsk II within a revised timetable.

The Ukrainians have done nothing of the sort, and the new timetable for carrying out the terms of Minsk II is already slipping.

Any discussion of the internal aspect of the Ukrainian conflict – as opposed to its external aspect – has to proceed from the fact that the present Ukrainian government is simply incapable of compromise unless overwhelming external pressure is brought upon it.

The Russians long ago grasped this. Over the last few weeks there are clear signs the Europeans belatedly are starting to grasp it as well. The question that remains is for how much longer the Europeans will be prepared to go on making their relations with Russia hostage to the ideological obsessions of the Maidan movement and its neocon supporters.

The mounting evidence – judging from comments by people like Sigmar Gabriel and Horst Seehofer in Germany, Sarkozy in France, and from what happened during the summit in Paris – is that European patience is wearing thin.