Not all are equal in death

By Andrey Manchuk, first published on Counterpunch, Jan 20, 2015, translated by D. Kolesnik from the original publication on the left-wing Ukrainian website Liva (The Left)

Recently, there appeared on the Internet an electronic database with photo-documents of Ukrainian military personnel killed in the war in eastern Ukraine. The documents include passports, military IDs, drivers’ licenses, personal files and credit cards. Some papers are half-burned, while others are untouched, as if nothing has happened to their owners. The documents were found with the dead bodies of these people in several areas of the Donbass region of eastern Ukraine, near the towns of Saurovka and Illovaisk, close to the cities of Donetsk, Lugansk and Gorlovka. The papers were published at the suggestion of the search teams so that the relatives of those killed could finally find out about their fate of their loved ones. As it happened, the majority were still officially listed as missing. They were also not included in the statistics of losses of the Ukrainian army. 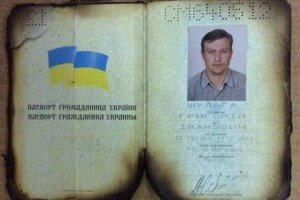 The database is to be updated because not all the papers of deceased soldiers have been collected and scanned for publication.

According to the published scans of passports, the list includes people from many regions of Ukraine, including Khmelnytsky, Cherkasy, Sumy, Poltava, Kherson, Chernihiv, Rivne, and Kyiv regions. But by a startling coincidence, a feature of most of the people recorded on the website is that they are from Zhytomir region. In particular, they are conscript and contract soldiers from Novograd-Volynsk and Chudniv districts of Zhytomir region. That is where my relatives live. The dead soldiers are from the 30th Mechanized Brigade of the Ukrainian armed forces, which in August was sent by its command into a crazy, suicidal mission. The brigade was ordered to attempt a breakthrough that could lead to capturing the cities of Lugansk and Donetsk by the time of Independence Day in Ukraine, August 24. If the breakthrough succeeded, it would greatly raise the stature of the military leaders and politicians who ordered and approved it.

The soldiers of the brigade were surrounded in the town of Latugino and near the village of Metalist. By official figures, 36 soldiers of the unit were considered missing, and I know that their friends hoped that they were in captivity. But now the fate of many of them appears to be tragically otherwise.

Zhytomyr region is one of the poorest areas of the poorest country in Europe. Its industry and agriculture were so severely destroyed in the 1990’s that today there are virtually no opportunities to find a job and earn money. People live there on subsistence farming, by injuriously cutting down local forests, or they work for pennies for local agricultural ‘landlords’. A salary of $100 to $200 per month is considered a good salary there. Young people ruin themselves with drink, and labour migration has long been commonplace for the whole region. There are villages that have been completely depopulated or that exist with very poor housing conditions, including people living without electricity, heating their houses by burning wood and covering windows with polyethylene film instead of glass. And they don’t send their children to school.

Military service was for many local residents a tool of social mobility. In peacetime, soldiers could at least earn a small paycheque and have guaranteed food and uniforms. Zhytomyr contract soldiers began to die long before the civil war in Ukraine. Twenty two year-old Ruslan Androschuk was killed in Iraq. Earlier, he had worked at a factory in Novograd-Volynsk. Then he joined the army to earn money for his wedding.

Zhytomyr region was drawn fully into the military conscription drive of the Kyiv government last spring and summer. Unknowing residents were called for “assembly” and tricked. They were told by the employees of the military registration office that they were being called for a few days of training only. They were then taken to “the training ground” – which proved to be the front line of the recently declared and expanding war by the Kyiv government (the so-called (“Anti-Terrorist Operation”) in Donbass.

Rumor quickly spread through the region. Soon, people began deserting the army or refusing to show up when called. Not wanting to kill and die, the men began hiding in the woods, just as many of their ancestors did during the German Nazi occupation of 1941-44. Some lived in forest huts with relatives living as foresters or in abandoned farms where, in either case, law enforcement agencies could not (or did not want to) apprehend them. Relatives brought food to them in the forest. All this was happening at a time when Ukrainian nationalists were screaming hysterically on social networks about a “holy war” for the nation and state, or were pompously talking about the “European choice of Ukraine”.

In early May, the military command officially acknowledged mass defections of the residents of Zhytomyr region and demanded punishment for people who, as time has shown, acted to save their lives from a senseless slaughter: “In times when the destiny of Ukraine was being decided, these military men voluntarily left the location of their units, thus showing their indifference to the situation in the state. For purposes of public display of their shameful act, we request to publish the lists of those people in local and regional press, to inform the authorities on the ground”, reported the Ukrainian television channel TSN. Then, in August, when the 30th Mechanized Brigade was surrounded in Donbass, the wives and mothers of soldiers began a desperate protest near the military checkpoint in Novograd-Volynsk, claiming that their sons and husbands had been sent to their deaths. But no one in Kiev paid any attention to them.

In scanning the scanned papers of the dead soldiers, one can clearly see a social portrait of the soldiers of the Ukrainian army. It is ordinary people who were killed on the soil of Donbass. Soldiers and junior officers were mostly from peasant backgrounds. According to questionnaire data, many of them had received vocational training. Two soldiers, children of migrant workers, wrote that their fathers worked abroad as construction workers, most likely in Belarus or Russia. Near one dead body there were found small Orthodox religious icons and the ID card of a tractor driver. A touching letter from a grandmother, sent from her village to the Novograd-Volynsk brigade, tells that she was raising her grandson in care, he drinks only on holidays, has a girlfriend and works as a mechanic and tractor driver. Now her grandson is dead. None of the politicians who seized power in Ukraine thanks to the sacrifices of dead young men like those of Zhytomyr region will give a damn about the fate of this poor woman.

We are often told that everyone is equal in death, but as we clearly see in this example, this is not the case. President Poroshenko, who is directly responsible for the catastrophic losses of the Ukrainian army and the death of civilians in Donbass, hypocritically mourns killed journalists in Paris on January 11 while in Donetsk, innocent people continue to die. Today, we can see that the lives of people from Ukraine, Nigeria, Syria, Libya, Iraq, Afghanistan, Mali and other countries of the Third World are not worth the same as those of citizens of the European Union. The political elites of the world, who now mourn the staff of a French magazine, are quite indifferent to the routine mass killings of the inhabitants of other regions, despite the fact that some European politicians are often directly responsible.

Children of Ukrainian politicians and oligarchs are not lying dead in the lands of Donbass. They enjoy a life full of fun and joy. They don’t fear forced military conscription. The petty, provincial bourgeoisie can relax and pay a bribe so their sons will not be drafted into the army. The corrupt generals cover for such ‘business as usual’. Wealthy chauvinists who work in offices do sometimes enlist in the ‘volunteer punitive battalions – to get their adrenaline pumping and be able to legally terrorize the hated residents of Donbass by searching them at checkpoints… in the rear of the action. But in the Ukrainian regular army, it is mostly the poor who fight and die. Their real enemy is far to the rear of these soldiers forcibly sent to the slaughter. Even in Donbass, the capitalists there have long ago taken their families away to safe places where they will not become victims of Ukrainian army shelling.

Recently, I saw in St. Nicholas Church in the capital city of Estonia, Tallinn, the fragment of the painting ‘Dance Macabre by the famous artist of medieval Germany, Bernt Notke. The Pope, the Emperor, the Empress, the Cardinal and the King dance together with skeletons, to the music of bagpipes played by the dead. This popular story of European iconography represents the temporality of human life for people from different backgrounds. Looking at this old painting, I remembered the fresh, hastily dug graves which we have seen on the sides of Savur-Mohyla [1] in Donbass. I recalled the destroyed houses in residential districts of Donetsk, the Ukrainian army deserters hiding like animals from military conscription in the forests of West Ukraine, and poor families grieving over the soldiers who have died for alien interests.

The victims of this war are almost always from the lower classes. No, not all are equal in death.

ndrey Manchuk is a member of the left-wing Ukrainian political association ‘Borotba’ and an editor of the Ukrainian web journal Liva (‘The Left’). Last year, his book examining the Euromaidan movement in Ukraine, titled ‘Blood of the Donbass’, was published in Russia. It is reviewed in English here on Liva.com. The Liva.com website regularly translates and publishes articles in English here.

Notes:
[1] Savur-Mohyla [Savur Tomb] is a strategic height in Donetsk region near Russian border. During WWII this height was the point of intense fighting between Soviet and German forces. In 1963 the memorial obelisk was unveiled on the top of the hill. In August 2014 it became the point of the battle between Ukrainian army and Donbass rebels. In result the obelisk was destroyed and the site is full of dead bodies[many of them still not buried] and  mines presenting a serious danger for the locals. Earlier story on Savur-Mohyla by the author, here. 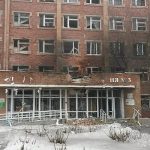 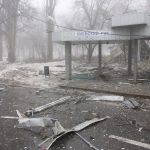