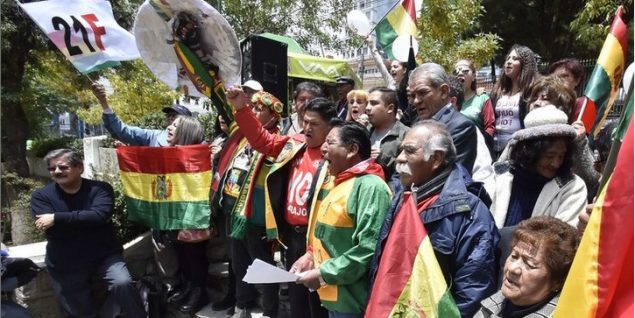 The OAS report on Bolivia’s election should be discarded, except for the purpose of a credible investigation into how such appalling work ever came to be done—and promulgated uncritically, and turned to such devastating effect.

President Evo Morales won re-election in Bolivia’s presidential election last October 20, as pre-election polls predicted. He received 47% of the vote in an election with 88% turnout. He beat his nearest rival by just over 10 percentage points, which meant a second round was not required. 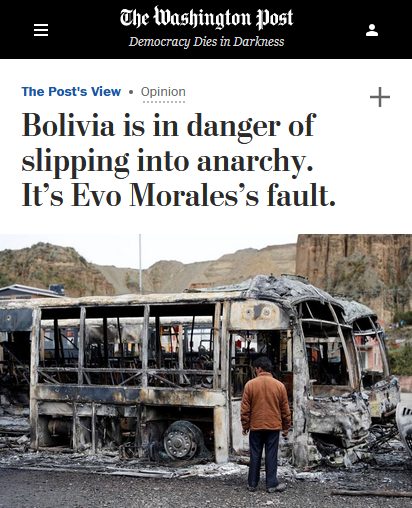 The Washington Post editorial board (11/11/19) stated as fact that Bolivian President Evo Morales “moved to falsify the results of the October 20 vote so as to hand him a first-round victory.”

But the day after the election, the Organization of American states (OAS), whom Morales had allowed to monitor the election, put out a press release claiming there had been a “drastic and hard-to-explain change in the trend of the preliminary results.” It was an obviously false claim (FAIR.org, 12/19/19).

Even though the Washington, DC-based Center for Economic and Policy Research (CEPR) immediately put out a statement (10/22/19) pointing out the basic flaw in the OAS’s analysis—it overlooks that precincts that report early can be different from ones that report late—the OAS continued to claim that the change in trend was evidence of fraud. CEPR persisted in exposing the OAS deception—for example, in a paper the think tank published on November 8 and an op-ed in MarketWatch (11/19/19) by CEPR co-founder Mark Weisbrot.  On December 12, at a permanent council meeting, the OAS—which gets 60% of its funding from the US government—refused to allow Jake Johnston to present CEPR’s preliminary response to the OAS’s final report on the election.

In the meantime, the OAS’s disparagement of the election ignited violent protests that (combined with the treasonous behavior of Bolivia’s military and police) forced Morales to flee Bolivia on November 10 to avoid being lynched. Bolivia’s security forces “suggested” Morales resign, allowing him to be run out of the country (with his house ransacked), but then sprung murderously into action to consolidate the coup. Within two weeks, 32 people were killed protesting against the dictatorship that took over after he fled. The dictatorship openly says it will arrest Morales if he returns to Bolivia.

Late last month, MIT Election Data and ScienceLab researchers John Curiel and Jack R. Williams published an analysis of the election results in the Washington Post (2/27/20). The study was commissioned by CEPR to show that its analysis could be independently verified. The MIT researchers concluded that there “is not any statistical evidence of fraud that we can find,” and that “the OAS’s statistical analysis and conclusions would appear deeply flawed.” 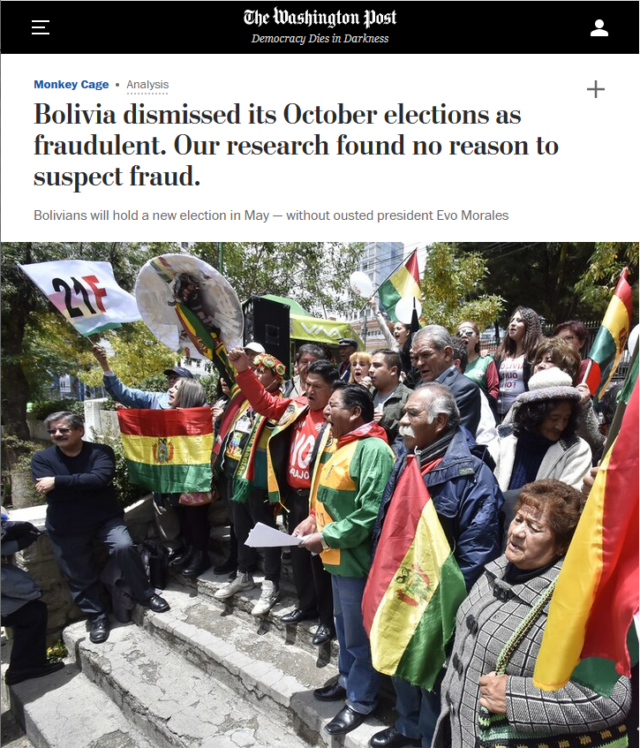 The Washington Post (2/27/20) published the findings of MIT researchers that indicated that the Bolivian government whose ouster the paper’s editorial board had celebrated had actually been legitimately reelected.

That’s a scholarly but overly polite way to put it. The OAS repeatedly made statistical claims about Bolivia’s election that were clearly false. In layperson terms, that’s called lying.

The OAS’s lies proved lethal to Bolivians and devastating to their democracy, but the OAS evaded all accountability because, when it mattered most, corporate media shielded it from scrutiny. Between the October election and December 26, Reuters published 128 articles about the political situation in Bolivia that all failed to mention the efforts to get the OAS to retract its bogus statistical claim. Instead, Reuters regurgitated that claim many times without a trace of skepticism (FAIR.org, 12/19/19).

Days after the election, the Washington Post editorial board (10/24/19) uncritically quoted the OAS expressing “worry and surprise about the drastic and hard-to-justify change in the tendency of the preliminary results.” The editorial added that “the [US] State Department issued a similar message,” as if that boosted OAS credibility. The day after Morales fled, the Post (11/11/19) followed up with another editorial headlined “Bolivia Is in Danger of Slipping Into Anarchy. It’s Evo Morales’s Fault.”

If the Post editorial board knew anything at all about the scathing criticism the OAS had received, it kept completely quiet about it. And it’s actually quite possible the editorial board members knew nothing, if they relied on their paper’s own reporting. The Post’s search engine turns up only ten articles since the October 20 election that contain the terms “Bolivia,” “Morales” and “OAS.” Only two of those mention any criticism of the OAS: One is a November 19 op-ed by Gabriel Hetland (11/19/19), the other is the piece the Post just published by the MIT researchers (2/27/20).

On December 2, the Guardian published a letter signed by 98 economists and statisticians asking the OAS to retract its false statistical claims. Such breaks with the silence over the CEPR’s efforts to hold the OAS accountable were all too rare. Even a Guardian oped by Hetland that opposed the coup (11/13/19) mentioned OAS claims about the election without saying anything about the criticism they had received from CEPR. 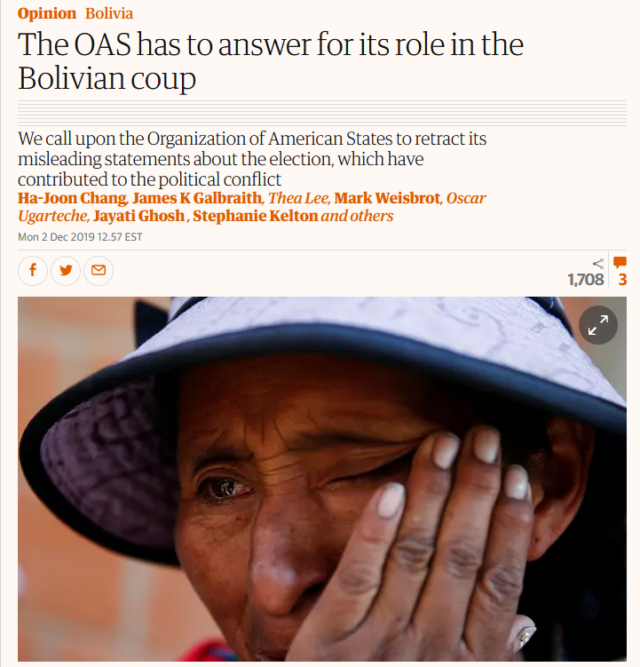 Economists and statisticians (Guardian, 12/2/19) called on the Organization of American States to retract its discredited study — but the US-funded institution stuck to its guns.

Just like the Post, the day after Morales fled Bolivia, the New York Times editorial board (11/11/19) described the coup as a risky but necessary step towards restoring democracy:

The forced ouster of an elected leader is by definition a setback to democracy, and so a moment of risk. But when a leader resorts to brazenly abusing the power and institutions put in his care by the electorate, as President Evo Morales did in Bolivia, it is he who sheds his legitimacy, and forcing him out often becomes the only remaining option. That is what the Bolivians have done, and what remains is to hope that Mr. Morales goes peacefully into exile in Mexico and to help Bolivia restore its wounded democracy.

Like the Post, the Times editorial board members were breezily ignorant (or unconcerned) about the OAS repeatedly lying about the election. The Times recently published a news article (2/28/20) about the MIT researchers who rejected the OAS lies. The article said that the researchers “waded into a fierce domestic and international debate over Mr. Morales’s legitimacy.” That “fierce” debate was essentially buried by the corporate media when it might have prevented a coup. Incidentally, now even Reuters (3/1/20) has prominently reported the MIT study.

Stung by its lies belatedly getting some high-profile criticism, the OAS responded angrily to the study. The researchers looked at only one of the allegations it made, the OAS complained, saying other “irregularities” validated its assessment of the election. Amazingly, the OAS also said it continues to “stand by” its bogus statistical analysis.

All elections have some “irregularities” and “vulnerabilities,” as any US voter should be well aware. That does not automatically justify throwing the results in the garbage. If it did, any election could be unjustly discredited by unscrupulous monitors. Moreover, CEPR did addressother allegations, in the presentation the OAS refused to allow it to make (FAIR.org, 12/19/19).

At this point, the OAS report on Bolivia’s election should be discarded, except for the purpose of a credible investigation into how such appalling work ever came to be done—and promulgated uncritically, and turned to such devastating effect. In a just world, jobs would be lost, and OAS General Secretary Luis Almagro would resign. But when you have election monitors beholden to the US government, and a corporate media willing to cover for them, it is only duly elected officials in poor countries that need fear those kinds of consequences—and much worse.

Joe Emersberger is a writer based in Canada whose work has appeared in Telesur English, ZNet and CounterPunch.