‘Wall of Grief’ memorial to victims of Soviet repression unveiled in Moscow, but Western media wants to write about Vladimir Putin

Yesterday (30 October), Vladimir Putin attended the unveiling of the ‘Wall of Grief’, a monument erected in Moscow to the victims of communist repression. This is the third major such monument constructed in Moscow this year, the other two being the Sretenskii Monastery (about which I wrote earlier) and a memorial at the former Butovo firing range. 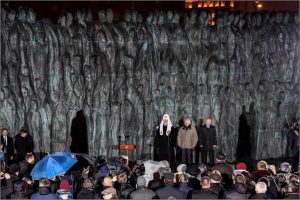 You might imagine that these strong signals of disapproval of communism would have some effect on how the media represents Putin and the state he leads. For instance, you might imagine headlines like ‘Putin condemns Stalinism’, or ‘Russian state turns it back on communist past’, combined with some analysis of how this connects to other similar official condemnations of the Soviet Union. Well, if so you’d be wrong. For the most part, Western media haven’t bothered covering the story at all, but let’s look at those which have.

Reuters sets the tone with the headline, ‘Putin opens monument to Stalin’s victims; dissidents cry foul,’ and with an opening paragraph declaiming that, ‘President Vladimir Putin inaugurated a monument to the victims of Stalinist purges on Monday, but Soviet-era dissidents accused him of cynicism at a time when they say authorities are riding roughshod over civil freedoms.’ At the very end of its article, Reuters takes pains to tell us:

Monuments and memorial plaques honoring Stalin have sprung up in different Russian regions. State-approved textbooks have softened his image, and an opinion poll in June crowned him the country’s most outstanding historical figure. By contrast, those who have helped document Stalin’s crimes, from the Memorial human rights group to individual historians and journalists, have sometimes felt themselves under pressure from the authorities. A group of Soviet-era dissidents published a letter on Monday, accusing Putin of cynicism. ‘We … consider the opening in Moscow of a monument to victims of political repression untimely and cynical,’ they said in the letter, published on the Kasparov.ru news portal. ‘It’s impossible to take part in memorial events organized by the authorities who say they are sorry about victims of the Soviet regime, but in practice continue political repression and crush civil freedoms.’

The BBC takes its cue from Reuters. It gives a factual headline, ‘Wall of Grief. Putin opens first Soviet victims memorial.’  But, after presenting the basic story, the BBC then cites the same group as Reuters, telling us that ‘critics accused him [Putin] of continuing political repression and “crushing civil freedoms.” A group of dissidents from the Soviet era wrote to a news website that they considered the event to be “untimely and cynical”.’ The BBC notes that Putin said that, ‘An unequivocal and clear assessment of the repression will help to prevent it being repeated,’ and that, ‘This terrible past must not be erased from our national memory and cannot be justified by anything.’ But it then qualifies this by finishing with the words, ‘In June, President Vladimir Putin warned that Russia’s enemies were “demonising” Stalin excessively. Under his rule, the Soviet victory over the Nazis has become central to a new ideology of Russian greatness.’ As with Reuters, a story about Putin condemning the crimes of Stalinism thus gets turned around and becomes a story about Putin ‘crushing civil freedoms’ and indirectly promoting the Stalin cult.

Next we have Deutsche Welle, which gives us the headline ‘With new Wall of Grief, Russia grapples with Soviet crimes.’ This starts off with a paragraph saying, ‘As some worry that Josef Stalin is being rehabilitated in Russia’s collective memory, a new monument to his victims has opened in Moscow. Survivors of his reign of terror are not convinced that it’s enough.’ It then recounts the opinion of Tatiana Nikolskaya, whose mother was imprisoned under Stalin, who says that she doesn’t like the Wall of Grief very much and complains that state compensation for Stalin’s victims has been ‘virtually nonexistent.’ Deutsche Welle, like the others, then turns the story around and tells us:

The unveiling of the Wall of Grief comes amid a period of rehabilitation of Stalin’s legacy. A bust of Stalin was erected this year on Moscow’s Alley of Rulers, glorifying the dictator alongside President Putin’s other predecessors. In an interview earlier this year, Putin said foreign enemies had used the ‘excessive demonization of Stalin’ to attack Russia. And that message from the top seems to be having an effect on Russia’s collective memory.

Deutsche Welle also takes care to note that in his speech at the unveiling of the Wall of Grief, Putin ‘stopped short of mentioning Stalin by name.’ The implication is clear – Putin isn’t really anti-Stalin at all. By contrast, the newspaper approvingly cites Ksenia Sobchak as saying that Stalin was ‘unequivocally a bloody hangman and criminal’. In this way, we are left with no doubt as to newspaper’s preferred Russian presidential candidate.

It’s interesting to see how this works. Putin unveils a monument to Stalin’s victims, but Western reporting doesn’t focus on that, nor link it to other memorials which repudiate communism (Butovo, Sretenskii, etc), but instead uses the event as what journalists call a ‘hook’ to write a story about political repression under Putin and the Russian state’s alleged rehabilitation of Stalin. And the sources it cites are the likes of Sobchak and Kasparov.ru, who represent a tiny and extreme fringe of Russian public opinion. Unfortunately, this is all too typical of how Russia is reported. Caveat Emptor, as the saying goes; or to put it another way, let the reader beware.