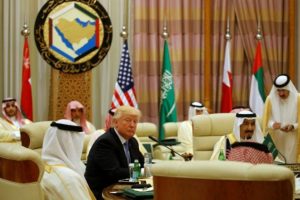 The Saudi-orchestrated bloc of Sunni Muslim states celebrated at U.S. President Donald Trump‘s visit to Riyadh is splintering less than two weeks after the summit. There is growing unease with the summit’s intense animosity toward Iran and increasing concerns that the Saudis are inflaming the sectarian divide between Sunnis and Shiites. Trump’s domestic troubles are also raising doubts over whether Washington is reliable.

The most acrimonious split is in the Gulf Cooperation Council (GCC), which held its own private summit with the president. The Qatari emir allegedly told an audience at home just after the summit that the Saudis were placing too much trust in a president in deep political trouble at home. He also criticized the virulent rhetoric castigating Iran at the summit. Emir Shaykh Tamim bin Hamid Al Thani has publicly said the Gulf states need to engage Tehran, not isolate it. He called Iranian President Hassan Rouhani to congratulate him on his re-election. In response, the Saudis and Emiratis blocked Qatar’s Al-Jazeera network. The Qataris said the emir’s remarks had been hacked by unknown sources and misinterpreted, but they provided little evidence to support their claim.

The Saudis next escalated the dispute with Qatar considerably. The Saudi media reported May 28 on an open letter from the Al-Shaykh family, the descendants of Muhammad Ibn Abd al-Wahhab. The letter is signed by all 200 of the male descendants of the founder of Wahhabism in the kingdom. The al-Shaykhs are the al-Saud’s critical partners in the ruling of the kingdom and provide its religious legitimacy. The minister of Islamic Affairs and the grand mufti both signed the letter.

The letter accuses the emir of an unidentified Gulf emirate of falsely claiming that he is a descendant of Wahhab. This false claim is not only “fabricated” but it also is allegedly being used to misinterpret Islam. The letter demands that the bad emir change the name of the largest mosque in his country, currently named the Shaykh Muhammad ibn Abd al-Wahhab Mosque. (The largest mosque in Doha, Qatar, is in the only other Wahhabi state aside from Saudi Arabia).

The letter is from the heart of the clerical establishment in Saudi Arabia and amounts to an indictment of the legitimacy of the Qatari ruling family. It is unprecedented in GCC politics for one state to dispute the legitimacy of another’s royal family. It’s also a quarrel within Wahhabism.

The Saudi media has also accused the Qatari foreign minister of meeting secretly with Iranian Revolutionary Guard Corps commander Qasem Soleimani in Iraq to cooperate against American and Saudi interests in Iraq. There is no independent verification of this information. [See: Secret Qatari-Iranian meeting held in Baghdad: report, Gulf News, May 25, 2017).

The Qatari quarrel is highly visible and has gone on before. It’s a repeat performance of the “uppity” Qataris’ challenging their bigger brother. More quietly, Oman has also distanced itself from the Saudi bloc. Sultan Qaboos did not attend the Riyadh summit and his representative did not get a short bilateral meeting with Trump, as did all the other GCC representatives. Oman has stayed out of the Saudi war in Yemen and has kept open its ties to Iran.

Both Qatar and Oman have economic ties with Iran that constrain their approach to Tehran. But the emir and sultan are also very troubled by the growing sectarian tensions throughout the Islamic world.

Doubts have also surfaced in Pakistan, which shares a long border with Iran and has a large Shiite minority. Prime Minister Nawaz Sharif received an apology from King Salman bin Abdul-Aziz Al Saud for not arranging a bilateral meeting with the president or allowing Sharif and other Muslim leaders the opportunity to speak after Trump addressed them about Islam.

Saudi relations with Pakistan have been troubled since the start of the war in Yemen, which Pakistan decisively refused to join despite repeated Saudi requests. The Pakistani parliament even voted unanimously to keep out. Pakistan is the Muslim world’s biggest military power and the only Muslim country with nuclear weapons.

The Pakistani media is now criticizing the Riyadh summit relentlessly for exacerbating sectarian tensions. One commentator called the Saudi-led coalition “dangerous” while another lambasted Trump’s “bluster.” The Riyadh summit was labeled “theater of the absurd” in the country’s leading newspaper. Calls are growing for the Pakistani commander of the Saudi-based Islamic Military Alliance and former army commander Gen. Rahul Sharif to come home and quit his job as the leader of the so-called Arab NATO.

Saudi largesse will ensure the Sunni alliance does not completely unravel. A core group of states share Riyadh’s hatred of the Iranians or are prepared to indulge Riyadh. But many more states are eager to avoid fanning the sectarian divide. They blame both Riyadh and Tehran for stoking tensions. For all of them, their own national interests trump Islamic or Sunni unity. 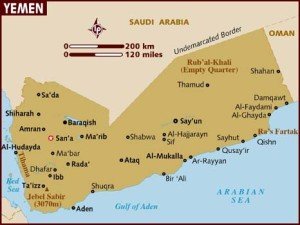 The United Nations’ Yemen envoy says more than seven million people are facing the risk of famine in the impoverished country of Yemen which has been under incessant Saudi attacks for more than two years.

Speaking at an open session of the UN Security Council on May 30, Ismail Ould Cheikh Ahmed warned against the prolongation of the conflict in Yemen and said, “At the begging of the holy [fasting] month of Ramadan, we have to remember that seven million Yemenis are at risk of famine unless this conflict ends.”

“The humanitarian crisis and the threat of famine [are] entirely man-made. If the conflict stops, Yemenis and their partners in the international community have the capacity and the will to rebuild the country,” he said

He said “less than 45 per cent” of medical facilities in the country are functioning as a cholera epidemic takes its toll on the war-weary nation. The disease has led to more than 500 deaths, while there are over 60,000 suspected cases in 19 provinces, said Ahmed, adding, “The rapid spread of the disease has been worsened by the inadequate healthcare system.”

“Medicines for diabetes, hypertension, cancer and other chronic diseases are in short supply,” the envoy said.​

In March 2015, the Saudi regime and its allies, backed by the United States, began a military campaign against Yemen to reinstall its former government. The war has killed over 12,000 civilians since then.

Ahmed further pointed to the Saudi airstrikes against civilian targets in Yemen and said, “On 29 March, an airstrike in Sa’ada governorate reportedly killed 12 civilians, including several children.”

He said the potential outbreak of violence in al-Hudaydah will critically hamper the already-ponderous flow of foodstuff and medicine into the country. “I have proposed an agreement to avoid military clashes in Hudaydah,” Ahmed said. “My proposal, which includes security, economic and humanitarian elements, would allow for the continued flow of commercial and humanitarian supplies.”

Hudaydah is controlled by Yemen’s Houthi Ansarullah movement, which is defending the country against Saudi-led raids with the help of the army and popular forces.

In March, reports said Washington and the Saudi-led coalition are considering an attack on Hudaydah to seize the port city from Houthi fighters.

Ahmed highlighted the overall lack of progress in settling the conflict, blaming ongoing fighting on the “reluctance of the key parties to embrace the concessions needed for peace.” Moreover, Ahmed called on the parties to urgently start a dialogue to prevent further aggravation of the situation.

The persistent Saudi military action is leading to an increased militarization of the Yemeni population, extensive proliferation of weapons, and widespread use of deadly landmines, the official cautioned.

Ahmed, meanwhile, said the rampant instability had turned much of the country into breeding grounds for extremist groups such as al-Qaeda. 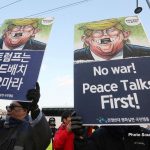 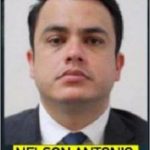