Waivers Over – Bolton Gets His Way 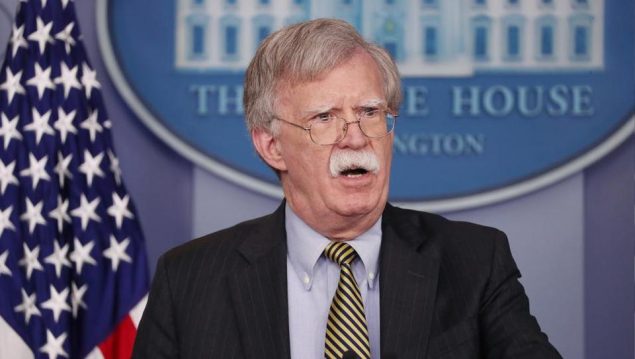 With the US decision to end the eight waivers issued in respect to the import of oil and gas from Iran on 2 May, the Trump Administration effectively is taking its first steps along the path of undeclared war on Iran.

Iran will not necessarily look for escalation: to wriggle through will be to win a major symbolic victory. But if it is pushed to the limit, Iran likely will first respond by pushing back in the region and in Afghanistan against US interests.

With the US decision to end the eight waivers issued in respect to the import of oil and gas from Iran on 2 May, the Trump Administration effectively is taking its first steps along the path of undeclared war on Iran: An attempt to break the morale of the Iranian people (by pushing a greater proportion of the population towards absolute poverty), and to acquiesce to terms (Pompeo’s 12 conditions), which would amount to abject (and improbable) Iranian capitulation. It is a narrow path, bordered on all sides by lurking unforeseen, unforeseeable disasters – thorny thickets, in which Bolton and Pompeo may well find themselves painfully entangled. Will these steps then inevitably lead to grave escalation? They might; but also, Iran knows that if it can wriggle around these formidable impediments, and still remain standing, then Iran will stand victorious. To survive is to win. To survive will turn from Iran’s to America’s hurt.

Why should they take these steps? Why take the risk? All American foreign policy ultimately is domestic politics. Vice-President Pence at the Munich Security Conference earlier this year lauded Trump’s hard-nosed, shoot-from-the-hip decision-making. He commended ‘tough government’ as a quality that the EU too should try to emulate. This clearly will be the Trump platform for 2020: ‘I am the man who makes tough decisions and who then just ‘does it’’. The entrepreneur translated into politics.

But this is not what US Iran policy is about. It may be true that Washington is disappointed that its pressures on Iran, so far, have achieved no results – in terms of changing the Iranian polity. But this waiver declaration is more about attending to Trump’s Evangelical base. It is a particularly loyal base which wholly concurs with the Israeli Right that Revolutionary Iran stands as an impediment to the coming into being of the prophesied ‘Greater Israel’ – and concomitantly, with the return of the Messiah. This ‘base’ (25% of Americans profess Evangelism), has turned a collective blind eye to all Trump’s moral failings, and totally disdained the Russiagate allegations. Unmoved by either, they just have come to believe that Trump is the amoral, secular, flawed – yet somehow ‘chosen’ – instrument who can lead Christians in the Cosmic war of good versus evil – with Iran cast as the cosmic evil. And, behind in the shadows, lies ring-master, Sheldon Adelson and his billions, fusing together the (non-Evangelical) Bolton to Netanyahu’s Greater Israel project with the whole sitting atop Trump’s extraordinary loyal Evangelical base on which his continuance in office beyond 2020 may one day hang. The point here, is that this base is pressing for progress towards Rapture; the Bolton neoconservative base is pressing to settle old scores with Revolutionary Iran; the Israeli Right is pressing to take advantage of the ‘serendipidity’ of the Trump Presidency – and Trump wants to project his political muscularity as a campaign platform.

The most dense thicket into which the hikers may stumble is that by ending waivers for the major current importers of some one million barrels per day of Iranian oil – with China taking some half million, and India and Turkey most of the balance – the US is setting itself up for very troubled bilateral relations with key states: states with whom the US already has tense and finely balanced relations. India may cave to US pressure; but will China and Turkey? Iran says that it has other buyers waiting in the wings as well.

What will the US do if China ignores sanctions? Under the 2012 National Defense Authorization Act, non-US ‘significant’ transactions with the Iranian Central Bank are sanctionable (US transactions are criminal). The point here is that it is the Iranian Central Bank that is the receiver of all oil and gas monetary proceeds. Will the US attempt to sanction China’s Central bank? Or, will it look the other way as China sets up non-dollar work-arounds that defy US sanctions? How will that mesh with US-China Trade negotiations? How will these issues too, play out in America’s bilateral relations with Turkey and India?

In fact, the issues go wider: Iran is the pivot to both Russia’s energy heartland strategy and China’s Belt and Road initiative. Why should these states quietly acquiesce as Washington tries to knock-out the ‘key stone’ to their economic architecture? China needs security of energy supply, and is acutely aware of its vulnerability to naval blockade via the Malacca Strait. Russia and China jointly have just stuck a small, yet psychologically significant, spanner into the US’s Venezuela regime-change project, as if to say, ‘We have had enough of these US games’. It is hard to imagine then that they would let the strategic prize of Iran be cast down by similar forces of chaos. We shall have to see.

And there are yet other significant ‘unknown, unknowns’ at the path’s edge, awaiting Messrs Bolton and Pompeo. Even if they are successful – and take some 1 million bpd off the market – will these barrels be replaced? Is the legendary 2.2 million bpd spare oil capacity, real – and deliverable at short notice? What becomes of the OPEC production cuts? What happens to prices? Gasoline prices in the US have been rising steadily over recent months (even with the market inventory still intact). The price of a gallon of gas in California now stands close to the red line of political sensitivity at $4.30. Mishandled, this could end with the ‘risk factor’ in oil spiking, and tip us all into recession.

Though the waivers are declared by Pompeo to be ‘over’ and ‘no more’, in fact it is the structure of economic attrition that is mutating. Instead of ‘waivers’ that are publicly announced, and specific, the State Department is adopting a new form of economic warfare: They will henceforth only issue licences. Each will be issued only on an individual, application-by-application basis. There will be no framework to permissions, no guidance; only by making the application will the applicant know whether it will be granted – or not. The outcomes will not be made public.

It is the full weaponsiation of ambiguity – and recall that the following sanctions still apply to Iran: All US laws regarding sanctions on Iran permit national security waivers, usually temporary; some laws allow permanent exemptions, and of course the US President can modify any executive order. During President Trump’s term, the State Department appears to have granted waivers for the following sanctions:

The Iran Freedom and Counter-Proliferation Act of 2012, specifically sections 1244 (covering energy, shipping, shipbuilding, and ports), 1245 (adding specially designated nationals and any sector of Iran’s economy determined to be “controlled directly or indirectly by Iran’s Revolutionary Guard Corps”), 1246 (“nuclear, military, or ballistic missile” items and precious metals), and 1247 (insurance for the previously cited activities). These sanctions can be waived for up to 180 days.

The Iran Threat Reduction and Syria Human Rights Act of 2012, sections 212(a) (covering insurance for Iranian oil shipments) and 213(a) (government borrowing), which can be waived for up to 180 days.

The National Defense Authorization Act for fiscal year 2012, section 1245(d)(1) (covering foreign banks involved with Iran’s oil trade), which can be waived for up to 120 days.

With the move away from ‘waivers’ to unpublicized, specific ‘licences’, the US effectively sets itself up as the global trade governance, arbitrating on a truly wide range of trade – if one includes all the Russia sanctions, CAATSA legislation and entire cosmos of US global sanctions. Henceforth, the US Treasury will increasingly sculpt global trade toward US interests, in the dark, and with no public announcement. It seems hard to see how major trading nations can passively acquiesce to such a ‘sanctions architecture’. China, in particular, must be expecting that it will, one day, be an US sanctions target (beyond Iran).