MOSCOW – Russian President Vladimir Putin on Monday ordered the defence ministry to begin the withdrawal of Russian forces from Syria from Tuesday. 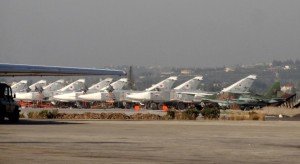 Fighter jets at Russian military base in Latakia, Syria (AFP)

“The task that was set before our defence ministry and armed forces has as a whole been completed and so I order the defence ministry to from tomorrow start the withdrawal of the main part of our military contingents from the Syrian Arab Republic,” Putin told Defence Minister Sergei Shoigu in televised comments.

The Kremlin announced that Putin had called President Bashar al-Assad to inform Moscow’s long-standing ally of the surprise move that appears to end the main part of its intervention in Syria’s conflict that began in September.

“The leaders noted that the actions of the Russian airforce allowed to radically change the situation in the fight against terrorism, to disorganise the fighters’ infrastructure and inflict significant damage on them,” the Kremlin said in a statement.

“Taking that into account, the President of Russia stated that the main tasks set before the armed forces of Russia in Syria had been completed. It was agreed to carry out the withdrawal of the main part of Russia’s airforce contingent,” the statement said.

The two leaders, however, also agreed that Moscow would maintain an airforce facility in Syria to help monitor the progress of a ceasefire in the war-torn country.

“Assad noted the professionalism, courage and heroism of the officers of the Russian armed forces that took part in the military operations and expressed deep appreciation to Russia,” the Kremlin statement said.

Russia began its bombing campaign in support of Assad’s forces in September, a move that helped shore up the Syrian regime’s crumbling forces and go on the offensive.

A fresh round of talks to end Syria’s civil war opened in Geneva on Monday, but hopes for a breakthrough remained remote with the sides locked in a bitter dispute over the future of President Bashar al-Assad.

A temporary ceasefire in the country introduced on February 27 has largely held, despite accusations of violations from both sides, allowing aid to reach some 150,000 people living under siege. 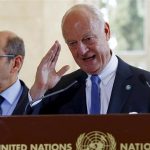