Viva Fidel! The view from Africa

If Africa is a country, then Fidel Castro is one of our national heroes. 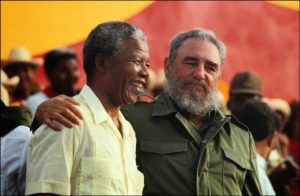 After fronting the Cuban revolution against a corrupt, American-sponsored dictatorship in 1959, Cuba under Fidel worked hard to develop its own distinct foreign policy independent from its more powerful neighbor, the United States, or its supposed ally, the Soviet Union. Africa became central to that foreign policy.  For me, and people of my generation, Fidel Castro entered our consciousness as a hero of our liberation. He wasn’t just fighting for an abstract cause. He was literally fighting for us.

One of Castro’s central foreign policy goals was “internationalism” – the promotion of decolonization and revolutionary politics abroad. This involved sending troops to fight in wars against colonial or proxy forces on the African continent, as well as supporting those movements with logistics and technical support. Cuba sent troops, but it also sent tens of thousands of Cuban doctors, dentists, nurses, health-care technicians, academics, teachers and engineers to the continent and elsewhere. That a significant proportion of Cubans trace their ancestries to West and Central Africa (owing to slavery) contributes to this politics.

It is important to note that critics of Cuba have pointed to the paradox of this policy: while Cuba has a progressive foreign policy on race, at home Afro-Cubans have often been at odds with the Communist Party’s failure to reflect the full range of Cuba’s racial diversity in its leadership structures or to fully address race politics. Nevertheless, this doesn’t detract from Cuba’s Africa policy. 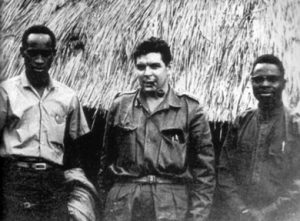 Cuba’s involvement in Africa started with the Congo (later renamed Zaire and now the Democratic Republic of Congo or DRC) following the murder of Congo’s first prime minister, Patrice Lumumba, by a conspiracy of western intelligence agencies (the strong hand of former Belgian rulers), and local elites. In 1964 Castro sent his personal emissary, Che Guevara, on a three-month visit of a number of African countries, including Algeria, Benin, Ghana, Mali, Guinea, Congo-Brazzaville and Tanzania. The Cubans believed that there was a revolutionary situation in Central Africa, and they wanted to help, argued historian Piero Gleijeses, who studied Cuba’s Cold War foreign policy in his books, Conflicting Missions: Havana, Washington, and Africa 1959-1976 and Visions of Freedom: Havana, Washington, Pretoria, and the Struggle for Southern Africa 1976-1991.

Crucially, Guevara established relations with the Popular Movement for the Liberation of Angola (MPLA), then based in Congo-Brazzaville. In 1965, Cubans instructors trained MPLA fighters to fight Portuguese colonialism. Later that year, Guevara and a group of exclusively black Cubans joined Lumumbaists, led by Laurent Kabila, in a revolt against Mobutu Sese Seko’s government (then backed by South African and Rhodesian mercenaries). This revolt was crushed due to a mix of factors: naiveté, unpreparedness, and the poor quality and lack of commitment of Kabila and his men.

Successes did follow elsewhere, however. Even as Cuba’s intervention struggled in Congo, Amilcar Cabral, leading a guerrilla struggle against Portuguese colonialism in Guinea Bissau and Cape Verde, asked for Cuban assistance. Between 1966 and 1974, a small Cuban force proved pivotal in the Guineans’ victory over the Portuguese. Following the Carnation Revolution in Portugal in 1974, Guinea-Bissau finally won independence. This time, Cuba’s involvement also stretched to medical support (Cuban doctors) and technical know-how. After shifting to Guinea-Bissau  and Capo Verde, the Cubans were critically important to the MPLA’s success in taking the capital city of Luanda and declaring independence on November 11, 1975.

Cuba’s involvement in the freedom of South Africa from white minority rule was even more dramatic. Twice – in 1976 and again in 1988 – the Cubans defeated a US supported proxy force of the South African Apartheid army and Angolan ‘rebels’; these instances were the first times South Africa’s army was defeated, a humbling experience that the Apartheid regime’s white generals still have trouble stomaching in retirement.

As Piero Gleijeses told Democracy Now! in December 2013, at the time of Mandela’s passing, black South Africans understood the significance of these defeats. The black South African newspaper, The World wrote about the skirmishes: “Black Africa is riding the crest of a wave generated by the Cuban victory in Angola. Black Africa is tasting the heady wine of the possibility of achieving total liberation.”

Gleijeses remembered how Mandela wrote from Robben Island: “It was the first time that a country had come from another continent not to take something away, but to help Africans to achieve their freedom.”  (Another excellent account of Cuba’s African policy is Egyptian director Jihan el Tahri’s film Cuba: An African Odyssey.)

Ultimately, Cuba’s successful battle against South Africa in Angola also hastened the Apartheid regime’s withdrawal from Namibia after 70 years of occupation, and that country’s subsequent independence.

In a 1998 speech, Fidel Castro told the South African Parliament (it was his first visit to the country) that by the end of the Cold War, at least 381,432 Cuban soldiers and officers had been on duty or “fought hand-in-hand with African soldiers and officers in this continent for national independence or against foreign aggression.” Many Cubans also lost their lives in these wars.

Given this history, it was no surprise that one of Mandela’s first trips outside South Africa – after he was freed – was to Havana. There, in July 1991, Mandela, referred to Castro as “a source of inspiration to all freedom-loving people,” adding that Cuba, under Castro’s leadership “helped us in training our people, gave us resources to keep current with our struggle, trained our people as doctors.”  At the end of his Cuban trip, Mandela responded to American criticism about his loyalty to Castro and Cuba (LA Times): “We are now being advised about Cuba by people who have supported the Apartheid regime these last 40 years. No honorable man or woman could ever accept advice from people who never cared for us at the most difficult times.”

That loyalty to Cuba led to Mandela being boycotted by Cuban exiles on a 1990 visit to Miami, Florida. The local African-American community, however, supported Mandela’s stance.

The Cold War ended a long time ago, but Cuba continues its involvement on the African continent, including training Africans in Cuban universities. During the Ebola outbreak in three West African countries, even Cuba’s American critics had to acknowledge the Cuban contribution to alleviating the crisis. The Washington Post, a newspaper hardly favorable to Cuba’s government, conceded that Cuba’s “official response to Ebola seems far more robust than many countries far wealthier than it.” The Post noted – via Reuters – that Cuba had around 50,000 health workers working in 66 countries, including more than 4,000 in 32 African countries.

At one point during the Ebola crisis, Cuba – a country with only 11 million people – had supplied the largest contingent of foreign medical personnel by any single nation working alongside African medics.

Altogether fitting was Cuban President Raul Castro’s address at Nelson Mandela’s funeral in 2013. In Johannesburg, Raul reminded his audience: “We shall never forget Mandela’s moving homage to our common struggle when on the occasion of his visit to our country on July 26, 1991, he said, and I quote, ‘the Cuban people have a special place in the hearts of the peoples of Africa’.”

If Raul Castro decided to give all the credit for that love to his older brother Fidel, well, no one would blame him.

Sean Jacobs is on the international affairs faculty of The New School in New York City. He was born and grew up in apartheid South Africa, where he finished college before studying abroad. He earned a PhD at the University of London and is the founder and editor of ‘Africa is a Country’, founded in 2009. This article also appeared in The Guardian, on Nov 30, 2016.