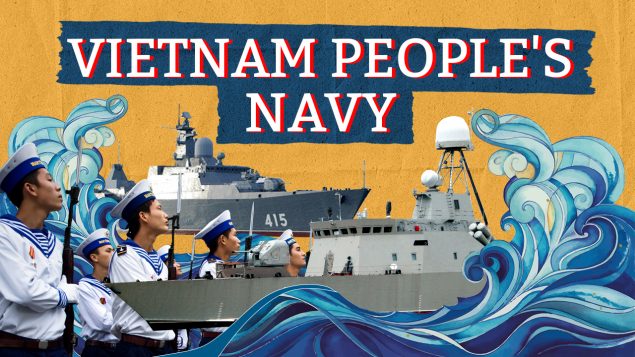 Increasing its role in South-East Asia and building a state foreign policy, the Socialist Republic of Vietnam pays special attention to the protection of sovereignty and territorial integrity, as well as control over the exclusive economic zone of the republic.

Currently, South-East Asia (SEA) is one of the most dynamically developing regions of the world, whose economic growth is associated with the concentration of significant resources, primarily human (about 600 million people), and the most important maritime communications that pass through it (the South China Sea* SCS) and the Strait of Malacca).

Yet, the presence of external (international terrorism, drug trafficking and piracy) and internal (religious and ethnic contradictions, political instability) threats, as well as the clash of interests of the main countries of the region and non-regional powers determine the high conflict potential of South-East Asia.

The Socialist Republic of Vietnam (SRV), increasing its role in SEA and building a state foreign policy, pays special attention to the protection of sovereignty and territorial integrity, as well as control over the exclusive economic zone (EEZ) of the republic. Thus, in the course of reforming the Vietnamese People’s Army (VPA), which acts as a guarantor of national security, its priority is to develop its maritime component.

An overview of Vietnam’s Armed Forces that performs the following tasks: conduct of hostilities in maritime theaters of military operations; destruction of enemy forces at sea and in the bases; targeting of ground objects; disruption of communications; protection of sea transport and the exclusive economic zone (EEZ) of the republic; assistance to land forces; amphibious landings and participation in repelling enemy landings; intelligence and control of the situation in the area of responsibility; conducting search and rescue operations as sea. The strength of the Navy is about 30 thousand people; the reserve is 50 thousand (the basis is self-defence units formed from public and private fishing, as well as transport companies). The commander directly directs the naval forces through a system of bodies and control points, including the Navy Command, the Centre Command Post (Haiphong), the command post (CP) in the southern strategic area (Ho Chi Minh City) and the command posts of the naval areas.

Training is conducted at the naval academy (Nha Trang) and the secondary technical school (Ho Chi Minh City). Training of submarine crews, as well as specialists in the operation of modern weapons systems, take place in Australia, China, Russia, the United States and the countries of the European Union.

In the course of operational and combat training (OCT) of the Navy, the ships’ crews and personnel of coastal units work out tasks for their intended purposes, master new types of weapons and military equipment, improve maritime training, including search and rescue at sea. Together with their partners, they are conducting OCT activities, and the Navy’s forces and assets are participating in multinational exercises, including the Association of Southeast Asian Nations (ASEAN). Regular events are held in the waters of the South China Sea, with special attention paid to the training of marine units and garrisons stationed in the Spratly Archipelago, as well as interaction with other types of Armed Forces and branches of the Armed Forces.

The national Navy is armed with more than 200 units of marine equipment, including more than 120 warships and boats, up to 20 tactical missile launchers, about 20 aircraft and helicopters, 150 tanks and armoured vehicles. Currently, Vietnam has the most combat-ready submarine fleet among the Southeast Asian countries. According to the Vietnamese military leadership, the improvement of this component of the Navy allows it to increase the military presence in the Spratly area, as well as effectively counteract the warships of the Chinese Navy in this region.

The development of the naval forces is a priority task for the VNA, which contributes to improving the combat capability of the Armed Forces as a whole. One of the main areas is to increase the combat capabilities of the national Navy to a level that ensures the effective response against the enemy in case of armed conflict over territorial disputes in the South China Sea.

To achieve these goals, a comprehensive programme of Navy modernisation by 2025 was adopted, which provides for the improvement of the organisational structure, optimisation of management and comprehensive support, equipping with modern airborne vehicles, as well as the development of the fleet basing system. Implementation of the planned activities is planned in two stages: 2018-2020 and 2021-2025. It is planned to allocate about 1.3 billion US dollars for their financing, 700 million of which will be spent on the purchase of new weapons.

By 2020, the Navy should have four brigade: guard ships, missile, rocket and artillery ships and patrol boats, as well as a division of surface ships and a centre for monitoring the underwater situation. It is planned to build two Sigma-type corvettes for the Navy, and purchase the French AS-565MV Puma helicopters for the Navy aviation.

In the future, the ship composition of the Vietnamese Navy is planned to increase to 40 warships and 180 boats.

Along with the purchase of military equipment abroad, it is planned to master the production of ships at the national shipbuilding facilities.

It is important to switch from purchasing finished products from foreign companies to their joint development, obtaining technologies and developing production on Vietnamese territory. One of the immediate tasks of the country’s leadership is to organise joint repairs of submarines with foreign partners. In this regard, the Vietnamese side intends to make significant efforts to launch a plant in Cam Ranh. In the future, this enterprise and production association “Bashon” (Ho Chi Minh City) is expected to service all types of ship and coastal weapons systems.

As part of the improvement of the fleet base system, infrastructure is being developed, including facilities on the islands in the South China Sea controlled by Vietnam. For example, the naval base Vung Tau is increasing the depth and increasing the length of berths. At the airfield (Spratly Island), the runway has been lengthened, the construction of defensive structures and logistics centre continues, and the fairway and anchorage areas are being equipped. An automated port air defence control system is being deployed.

The military and political leadership of Vietnam pays considerable attention to the development of the naval forces. The current long-term construction and modernisation programmes are aimed at improving their combat capabilities. At the same time, the scientific, technological and industrial potential of the state determines the interest of Hanoi in solving the tasks at the expense of cooperation with foreign partners.

* In the South China Sea, there are territorial disputes between Vietnam and China over the Paracel Islands, and between China, Brunei, Vietnam, Malaysia and the Philippines over the ownership of the Spratly Archipelago.