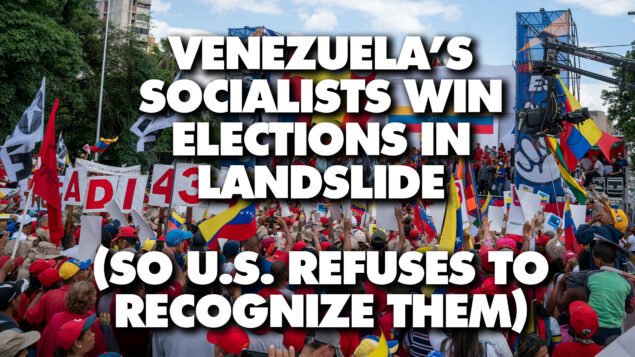 The United Socialist Party of Venezuela (PSUV) won the November 21 mega-elections in a landslide, getting more votes in 20 of 23 states and the capital Caracas. So the US government responded by trying to discredit the vote. Venezuelan journalist Diego Sequera speaks about the elections, the historic victory of the ruling party of President Nicolás Maduro, and Washington’s attempt to de-legitimize the process.

Venezuela’s November 21 regional elections were monitored by the European Union.

After years of boycotting previous votes, Venezuela’s right-wing opposition parties agreed to participate in these elections, through a series of negotiations that were held in Mexico and sponsored by Norway and the Netherlands.

A delegation of US National Lawyers Guild members traveled to Venezuela to monitor the elections, visiting 12 voting sites in Caracas and other states. They reported, “We observed a balanced and transparent voting process which voters expressed confidence in.”

“From a technical point of view, we observed an electoral system that was fundamentally transparent and facilitated by a workforce (poll workers, coordinators, table presidents) with strong technical competence regarding the functioning of the machines and the integrated election systems,” the National Lawyers Guild members wrote.

The North American electoral observers added, “We found that voters aligned with opposition parties also expressed confidence in the voting system. Additionally, the participation of opposition parties at polling sites, including as witnesses in opening and closing processes, strengthened the process and underscored the legitimacy of election results.”

Despite the teams of international observers affirming the legitimacy of Venezuela’s November 21 elections, the US State Department published a statement attacked the vote.

Secretary of State Antony Blinken claimed the regional elections were “flawed” and that the “regime” of democratically elected President Nicolás Maduro supposedly “grossly skewed the process to determine the result of this election long before any ballots had been cast.”

In his declaration, Blinken also reaffirmed US support for unelected coup leader Juan Guaidó, referring to him as supposed “interim president” of Venezuela.

In his interview with the Moderate Rebels podcast, Venezuelan journalist Diego Sequera quipped, “If Maduro’s government is a dictatorship, it must be the most flawed dictatorship and the most inconsistent dictatorship I’ve ever seen.”

There were “three times the number of opposition candidates that were running in all of these different elections, way over the Chavista candidates,” Diego added. “So it’s a very strange and defective ‘dictatorship’ that allows the political opposition to participate, that allows them to vote, that guarantees the right to vote and also a transparent process to vote.”

“Look what happened in Cuba. It wasn’t the reversion of the Trump policy, of Pompeo’s policy, and it didn’t go back to the Obama stage of relations between Cuba and the US,” Sequera said. “It actually remained under the framework of Trump’s State Department policy.”

“They’re not able to change anything,” Sequera continued. “They’re just ruled by some crazy inertia that won’t allow them to even highlight the return to a liberal, neoliberal, US order. And the same with Venezuela.”

You can listen to and download an audio recording of the interview below:

Moderate Rebels · Venezuela’s socialists win elections in landslide – so US tries to discredit them
Editors’ Note: While we don’t necessarily share the views we publish on New Cold War, we do attempt to provide readers with a range of views. This is because your right to make your own mind up depends on your being fully informed.
Share
Tweet
Share
Pin