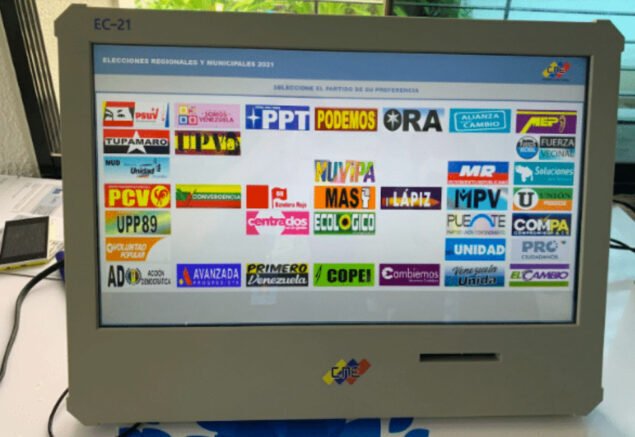 Electronic electoral ballot to be use in the 21N regional elections. Photo by Twitter / @MOEUEVenezuela

So far in this century there has been a phenomenon that cannot be ignored in Latin America. The revolutionary processes have been carried out mostly through democratic electoral suffrage as a substitute for the armed revolutionary processes of the last century. Instead, there have been coups or attempted coups carried out by forces of the neoliberal right to halt progressive democratic advances. This is the case, for example, of Honduras, Paraguay, Brazil, Bolivia, etc.

Instead, there have been coups or attempted coups carried out by forces of the neoliberal right to halt progressive democratic advances. This is the case, for example, of Honduras, Paraguay, Brazil, Bolivia, etc.

We are not going here to analyze the reasons for this phenomenon. But we do observe that as the revolutionary consciousness of Latin Americans has increased, the repressive forces have also escalated. In a few cases this is more evident as in the case of Cuba, Nicaragua and Venezuela.

But let’s talk about Venezuela because of its relevance in the region and because it is one of  those revolutionary processes – born of raised political consciousness – that has now been under a barrage of hybrid warfare attacks for the last twenty years.

With unrelenting persistence the Venezuelan governance has continued on its path of sovereignty, independence, democracy and social programs for the well-being of its population.

Right now Venezuela is embarking on another democratic process in its quest to keep its Bolivarian revolution alive despite a tremendous US uncontrollable determination to end it.

On November 21, regional and municipal elections will be held in Venezuela to elect 23 state governors, 335 mayors, 253 state legislators and 2,471 councillors. This is a total of 3,082 positions for which 70,244 candidates will compete in democratic elections. If the candidates could be equally distributed, that would give an average of almost 23 candidates for each position.

They will be elected by secret ballot in democratic elections open to the 21,159,846 eligible voters. Of those, 394,242 are new voters. And foreigners over 18 years of age and with more than 10 years of residence in the country, registered in the Electoral Registry, may also vote.

There is a very interesting fact that perhaps the Canadian government should consider if it were serious about its commitment to peace and reconciliation with the indigenous people of this country. Five days later, on November 26, 2021, 4,334 spokespersons for indigenous peoples of Venezuela will choose 8 state legislators and 69 municipal councillors in seven states through general assemblies.

Because of the magnitude of these elections, Venezuelans have called them “mega-elections.”

But there is another statistic that makes these elections very significant: This is the twenty-ninth electoral process that has taken place in Venezuela in the 22 years of the Bolivarian revolution.

Despite all this, some foreign governments are dedicated to delegitimising the elections in Venezuela for being “fraudulent” and for not being democratic, without ever giving evidence of these accusations. Without any more solid arguments and with empty statements, those interventionist governments have decided to declare the independent government of Nicolas Maduro “illegitimate”.

Imagine what would happen if the government of Venezuela dared to question the legitimacy of the government of Canada and accuse it of not being democratic because the 105 members of the highest legislative chamber of Parliament – the Senate – are not elected by Canadians, but rather they are appointed by the Prime Minister.

Imagine what would happen if the government of Venezuela dared to question the legitimacy of the United States government and accuse it of not being democratic because the president and vice-president are not directly elected by the Americans, but rather they are chosen by 540 members of the so-called Electoral College.

What Venezuela does dare to do is to accuse the United States and Canada of interfering in the internal affairs of Venezuela, and to categorically reject such intervention by way of unilateral economic and financial coercive measures that are also illegal according to the Charter of the United Nations and the Charter of the Organization of American States.

In a 2006 United Nations speech, Hugo Chavez accused the US of promoting what he called “elite democracy” in the world. That is the case, when a select group of individuals – generally selected by the US – operates under the illusion of democracy to ensure that the nation’s neoliberal policies are implemented to favor the interests of national and foreign corporations, and to impoverish the majority of workers. Chavez called neoliberalism a “world dictatorship.”

However, today Canada, among others, intervenes to supposedly promote a peaceful return to democracy. If Canada is truly interested in the “return to democracy” in Venezuela, it should renounce its aspirations to Venezuela’s mining wealth, lift all sanctions against Venezuelans and have an independent US policy towards Venezuela – a hands off Venezuela policy.

This is the same Canadian government that boasts of being a lover of democracy, and that demands it from the government of Nicolas Maduro, but does not allow elections that Venezuela has the right to be held on national territory and in its consulates in the world based on its laws and its national constitution.

Venezuela has embarked on the development of its own model of a “democratic, participatory and protagonist society” based on its right to sovereignty and independence according to its own constitution and in respect of international agreements.

As mentioned before, Venezuela has had 28 elections in the last 22 years. Elections of all kinds, presidential, regional, to elect members of the National Assembly and even referenda of presidential recall. But there is one election that we must remember for having a tremendous transcendence in the political life of the nation that still has repercussions today. That is the election for the National Assembly of 2015.

The election of members for the National Assembly of 2015 was legitimately won with a majority of members of the coalition of the Democratic Unity Table (MUD) in opposition to the Maduro government. Juan Guaidó was one of those members, certainly not the most popular until he was elevated in status by the US a few years later.

The opposition’s victory did not have any political reaction. The governing administration recognized that assembly without problems.

What had a political reaction was that, when the assembly was installed, in the first speech of its president of the opposition, Mr. Henry Ramos Allup, brazenly promised in the legislature on January 5, 2016 that within six months president Maduro would not be president  anymore.

What he in fact was promising was a parliamentary coup had the assembly not been declared in contempt for attempting to force three members who had committed proven electoral fraud.

Ironically, the opposition lost a great opportunity to dedicate itself to introducing legislation that could garner more support from Venezuelans, perhaps even enough to win the presidential elections of 2018.

The current National Assembly for the constitutional period 2021-2026 was elected in December 2020. The usual opposition parties, led by Juan Guaidó, decided not to participate.

As Venezuelans prepare for the upcoming mega-elections, what are the relevant points that make them trust the process? Ultimately, the following:

• transparency and democratic access for each and every voter wherever they live
• one vote per person without the possibility of multiple votes for the same person, and
• participation of companions (acompañantes in Spanish) and international observers (Carter Center, EU, UN and Council of Electoral Experts of Latin America).

These regional and municipal elections on November 21 constitute a new opportunity to ratify the solid nature of democracy and the strength of national institutions in order to counter the false information that foreign powers, media corporations and spokespersons of the extreme right seek to impose on the political life of Venezuela.

Venezuela has everything to defend the truth about its democracy.

Maduro’s government will for dialogue was also the basis for the establishment of conversations in Mexico City with the extreme opposition, grouped in the so-called Unitary Platform. One of the points on the agenda for talks – set in the memorandum of understanding signed between both parties on August 13 – is the discussion of electoral guarantees for all and a timetable for observable elections.

Through this mechanism, sectors traditionally advocating for abstentionism, resumed the electoral path with their political participation. Work is also being conducted to develop more guarantees, such as the exceptional inclusion of international observation in the electoral oversight scheme, in line with the provision to provide even more transparency.

Venezuela ratifies in these elections that it is a sovereign country and, therefore, its internal affairs are settled between its citizens and its institutions. No one outside has the power to validate or certify the reliability of the electoral results.

Featured image: Electronic electoral ballot to be use in the 21N regional elections. Photo by Twitter / @MOEUEVenezuela 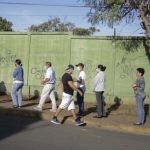 The Facebook Team that Tried to Swing Nicaragua’s Election is Full of U.S. SpiesAlan Mcleod, Latin America and the Caribbean, Nicaragua 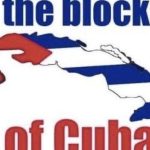 World Leaders Sign up to End Subversion and Blockade on CubaCuba, Latin America and the Caribbean