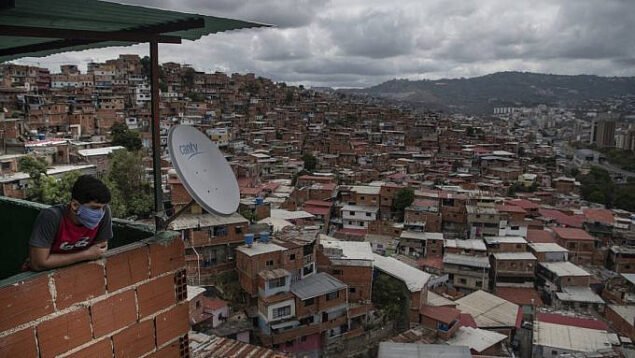 As a measure against the actions that criminal gangs have carried out in the last 48 hours in various sectors of Caracas, the Minister for Internal Relations, Justice and Peace, Carmen Meléndez, announced the “deployment of a new operation to protect and safeguard our people in Caracas, specifically the parishes of La Vega, Santa Rosalía, El Paraíso, San Juan and El Valle.” She also issued road restrictions for El Paraíso and its surroundings.

As a measure against the actions that criminal gangs have carried out in the last 48 hours in various sectors of Caracas, the Minister for Internal Relations, Justice and Peace, Carmen Meléndez, announced the “deployment of a new operation to protect and safeguard our people in Caracas, specifically the parishes of La Vega, Santa Rosalía, El Paraíso, San Juan and El Valle.” She also issued road restrictions for El Paraíso and its surroundings.

• Since the afternoon of July 7, organized crime groups have tried to undermine the peace of various sectors of Caracas. Our Heroes for Peace will not rest until we guarantee stability and protect our people.

• State security agencies continue to be deployed in the areas violated by these criminals and will not rest until they recover control.

• In this sense, we are announcing the deployment of a new operation to protect and safeguard our people in Caracas, specifically the parishes of La Vega, Santa Rosalía, El Paraíso, San Juan, and El Valle.

• This security deployment will be responsible for monitoring and controlling traffic on the roads surrounding these parishes. For this reason the population is asked to avoid vehicular and pedestrian traffic.

• We call on the people to remain safe, to maintain calm and trust in our state security institutions, and to ignore false information and rumors, as they are part of the aggressions against the peace of citizens.

Likewise, according to tweets issued by the Ministry for Internal Relations, Justice and Peace on its official social media accounts, restricted road access was put in place at the following locations:

Wednesday
In the past 48 hours criminal gangs have carried out actions causing anxiety in the Caracas neighborhoods of Cota 905, El Paraíso, Quinta Crespo, La Vega, El Valle, El Cementerio, and their surroundings, shooting in the air or at civilian populations, and sending heavily armed criminals on motorcycles to nearby sectors such as the boulevard of El Cementerio, ordering people to retreat to their homes, and trying to mark their presence.

Social media networks were filled with hundreds of tweets by residents of the area with videos and audio recordings of gunfire. Some people reported stray bullets penetrating into their homes.

Another sector that was targeted on Wednesday by criminals was the El Paraíso tunnels, where they allegedly attacked drivers as they were passing through.

According to the journalist Roman Camacho, the actions of this Wednesday left three civilians dead, one criminal killed at the Cota 905 tollbooth, and seven wounded by gunshots, including two officials.

According to Camacho’s report, a civilian identified as Giovanni Rafael Bracamonte was driving on the highway on Wednesday in a red Trailblazer. Gang members fired at him when he reached the El Paraíso tunnels. “Bracamonte remained inside the tunnel, sheltered with other injured people,” wrote Camacho Wednesday night at 10 p.m. “Unfortunately he passed away. They still report people trapped inside the tunnels waiting to get out.” He also reported one woman killed by a stray bullet in Las Tres Sirenas Street on Nueva Granada Avenue.

Thursday
Thursday, in the early morning, residents of El Paraíso and nearby sectors reported new shootings and explosions. A truck was set on fire in the morning at the entrance to the El Cementerio tunnels.

According to journalist Román Camacho, several people have been injured by gunfire on Thursday: two in the Quinta Crespo market, and one person in the lower part of La Vega. Camacho also reported shots fired at El Cementerio and Avenida Nueva Granada. Several apartments in El Paraíso were damaged.

“El Koki”
Eligio Rojas, a Venezuelan journalist, pointed out in a report by journalist Érika Ortega Sanoja for RT that one of the main gang leaders who plays a starring role in these tragic events is Carlos Luis Revette, alias “El Coqui” or “El Koki.” Their gang’s main business is the sale of drugs and, therefore, “they have to defend the territory where they distribute” their merchandise.

“Throughout that territory, they have about 32 sentry posts, which are like small buildings, where there are five or six armed criminals, who are the drug distributors,” according to Rojas. In addition to drug trafficking, the “El Koki” gang, which uses the Cota 905 road corridor, has been implicated in extortion, kidnappings, and murders.

According to residents of the area, the members of this criminal group confront the police in a very violent way, using thousands of families who live in the area as a human shield, and sometimes they shoot for hours to try to enact a sort of curfew.

“We have been living in terror for approximately two and a half months, in great fear, because the confrontation between these gangs has been constant, over an issue of gaining territory, and even over drug trafficking,” said a neighbor who preferred to remain anonymous.

Paramilitaries? Opposition?
According to the resident interviewed by RT, they are not “simple criminals,” but rather “a paramilitary group with powerful funding that aims to generate the crisis of a failed state.” He indicated “the amount of projectiles used, the caliber of the weapons they use and the logistical support they have” as factors that led to this conclusion.

For their part, Venezuelan authorities suggest that the gang has the backing of the political opposition. “They (the opposition) are putting in a lot of dollars and bills to buy criminal gangs to generate violence in the neighborhoods,” Venezuelan President Nicolás Maduro noted in a public address on June 8, for example.

International context
It is important to recall that in May 2020, in the Operation Gideon mercenary incursion in which a US “security” company was hired by the Venezuelan opposition to carry out an attempted coup against Nicolás Maduro, the action was preceded by four days of shootings and clashes by criminal gangs in Petare, east of Caracas. According to the government, these actions were planned as a distraction to facilitate the attempted coup.

On its Twitter account, Orinoco Tribune posted an analysis of the situation being witnessed firsthand by our team. Those close to the situation cannot ignore the urgent need for tangible and decisive actions by the Venezuelan authorities to protect the defenseless population terrorized by these paramilitary gangs:

Orinoco Tribune is based in El Paraiso, very close to an access point to Cota 905. Since Wednesday around 2pm the shooting started. Immediately CICPC took control of the area -too fast- like if they were waiting for the assault to happen… pic.twitter.com/OajtHJwYqt

RT journalist Erika Ortega Sanoja considered it relevant to highlight the June visit of the director of the Central Intelligence Agency (CIA), William Burns, to Colombia and Brazil, and the recent military exercises carried out by the US Southern Command in Guyana. On the other hand, others pointed out that the shootings occurred on the same day that a European Union (EU) delegation arrived in Venezuela to evaluate its participation in the upcoming 21N regional elections.

The killing of Haitian president Jovenel Moïse, assassinated by a militia allegedly composed primarily of Colombian mercenaries, and even the killing of Jesus Santrich a few weeks ago, also factored into the commentary of numerous analysts.

Battlefield already warming up for the night shift. We do not expect a quiet night here! #Cota905 #Coqui #KOKI pic.twitter.com/lHiSJQgO4O