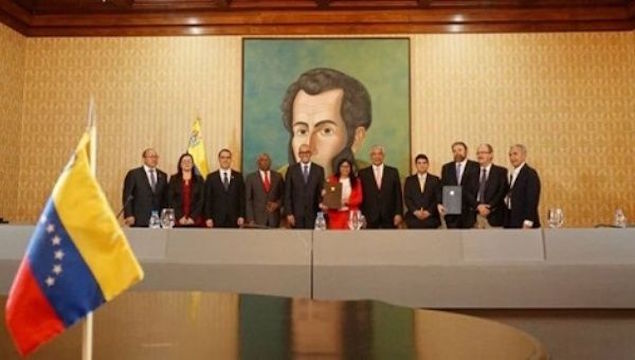 Participants at the National Dialogue Roundtable in Venezuela emphasised that all political parties who favour transparency and understanding to solve the country’s problems are welcome to join the dialogue.

The National Dialogue Roundtable in Venezuela, constituted by members of the constitutional government and representatives of the opposition, urged Tuesday for the international community to support the peace and understanding initiatives.

The participants reiterated in a statement that all political factions are working hard to reach a diplomatic solution to all internal problems. They also invited the European Union and the other international institutions to contribute to the collective effort.

“The spirit of this national table is inclusive, open, and transparent. It invokes the openness and calls on all national political actors to participate and at the same time, shows timely and necessary results to generate the confidence and progress that the country requires,” it read.

The members of the political parties affirmed that the main goal is to make proposals to specific issues faced by the country hit by an economic crisis, mainly generated ​​​​​by the illegal economic blockade, unilaterally imposed by the United States since 2016.

“The national roundtable is open to the incorporation of the different national actors. It also invites the International Community to accompany and comprehend this mechanism, with an open vision and with greater transparency by those who have shown a genuine concern for the well-being of our country,” the statement concluded.

Since its starting, partial agreements have been reached such as the incorporation of the ruling United Socialist Party of Venezuela (PSUV) and allied factions back to the National Assembly; along with revision and adjustments to electoral guarantees, and appeals to the justice system to agree on measures of benefits for some detained citizens.