Venezuela: The Next Syria? 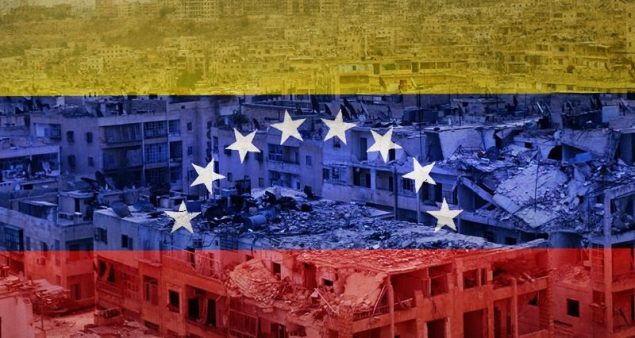 “The U.S. has sanctioned over $3 billion of the Venezuelan government’s business assets to help Guaido, and Maduro is still holding firm. It’s almost as if Washington isn’t learning from it’s own mistakes.”

We’re being led to believe it’s all doom and gloom in Venezuela. The mainstream media is rapid-firing reports of a deepening humanitarian crisis. An evil dictator, Nicolas Maduro, is holding his country hostage from democracy, they say, while his people starve. Venezuelans are reportedly fleeing by the thousands while the government blocks «aid» shipments from the U.S.’ ally, Colombia. And almost every day, a quick google search will bring you new «news» articles claiming Maduro will be overthrown by his own people sooner than you can say «Hands Off Venezuela.»

Then there’s Washington’s favorite and out-of-the-blue claimant to the presidency, Juan Guaido. He declared himself the real President of Venezuela a while ago, the man who truly has the people’s support. The guy is so confident, he’s graciously offered amnesty, several times, to military officials who defect to the opposition, betray Maduro, and give up on the Bolivarian Revolution.

Still, virtually no one in the military has taken him up on the offer. The U.S. has sanctioned over $3 billion of the Venezuelan government’s business assets to help Guaido, and Maduro is still holding firm. It’s almost as if Washington isn’t learning from it’s own mistakes.

This going-through-the-motions of U.S. foreign interventions seems almost copy and pasted from its previous attempt at regime change in Syria. Back then, Syria’s destabilization began with Arab Spring. The movement began spontaneously on social media, out of frustration with a general authoritarian atmosphere in many Arab countries. But organizations like the U.S. based National Endowment for Democracy and other soft-imperialist organizations quickly jumped in for a little dollar diplomacy.

Then in April 2011, the Obama Administration began slapping on sanctions. In only four months, the situation escalated to where it is now in Venezuela. Washington froze all U.S. based Syrian business assets, banned American purchase of Syrian petroleum, and decided it knows best for the Syrian people:

«The future of Syria must be determined by its people, but President Bashar al-Assad is standing in their way. His calls for dialogue and reform have rung hollow while he is imprisoning, torturing, and slaughtering his own people. We have consistently said that President Assad must lead a democratic transition or get out of the way. He has not led. For the sake of the Syrian people, the time has come for President Assad to step aside.» – Former President Barack Obama

Of course, in Venezuela’s case, the situation has come to screeching halt just short of where Syria descended into Civil War.

It’s no coincidence Syria was targeted in nearly the same way as Venezuela, despite each country being worlds away from one another. Both governments are socialist in nature, characterized by their national conditions.

In Syria, the Arab Socialist Ba’ath Party embodies a united front of Socialists and Nationalists who maintain public ownership of their economy’s major industries. Although they’re not a major oil producer, their close ties to the world’s 4th major oil producer, Iran, makes them a regional target. And it doesn’t help either that they are mortal enemies with key U.S. allies – Saudi Arabia and Israel.

Venezuela is governed by the United Socialist Party, whose power is entrenched in the country’s many barrios. Inhabitants from these barrios make up the poorest class of workers and are motivated by the socialist ideas of previous Venezuelan President Hugo Chavez. For many years, foreign companies profited from the country’s natural resources and left most people destitute, while enriching only a select few. With Venezuela’s standing as number three in global oil production and number one in reserves, resource exploitation is still extremely profitable. But the Socialist Party has learned from Venezuela’s history, and therefore reinvests profits from oil sales into economic development under state resource ownership. And with the U.S. companies losing out on those profits, the capitalists are not happy.

Though the most glaring similarity between both situations is that the governments are still alive and kicking.

After victory in the Cold War and a few early 21st-century regime changes, Washington is starting to lose its grip. The CIA dumped over $1 billion into «moderate rebel» groups in Syria with little to show for it. Syrian President Bashar Al-Assad’s government fought and won, and Maduro is promising to do the same in the event of an invasion.

Except the odds are now even less in Washington’s favor. In Syria, the political situation was deeply divided between national, ideological, and religious lines. The Venezuelan people are generally politically united behind the Bolivarian government and armed, while a relatively small group of well-off people make up the opposition’s leadership. The government’s resilience has already posed major obstacles for Guido and his American supporters.

To make matters worse for Washington, Socialism is not only threatening imperialism’s policies from abroad. America’s newest generations are rediscovering it, voting for open advocates of socialism. Bernie Sanders’ 2016 Presidential campaign promised a «Political Revolution» that sought to bring democratic socialism to the United States. Elected to the U.S. House of Representatives by the people of New York was Alexandria Ocasio-Cortez, another self-proclaimed socialist. Her platform includes medicare-for-all, an environmental protection plan called the Green New Deal, and system for full employment. And they all have one thing in common – no more imperialism.

In his 2019 State of the Union Address, Donald Trump proclaimed the United States «will never be a socialist country.» The New York Times, Washington Post, Fox News, MSNBC are all sending mixed signals – Socialism is both threatening and foolish, an outdated ideology and yet younger than capitalism, the guidelines for both naive college students and Washington’s greatest enemies.

Didn’t we see the End of History after the U.S.S.R fell?

Well, with polls saying fewer than half of young americans have positive opinions about capitalism, this may only be the beginning of a new historical struggle.