In Venezuela, the opposition strike that never was 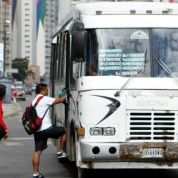 [Venzuela’s violent, right-wing opposition declared two days of strikes and street actions for July 27 and 28 in an effort to disrupt and threaten the election for a Constituent Assembly to take place on Sunday, July 30. Western media has played up the strike announcement, but it has been a ‘strike that never was’ according to the above report.

Here is a July 28 report on CNN, emphasizing that “fear grips Venezuela” and Venezuelan President Nicholas Maduro is engaged in a headlong rush to become a “dictator”. Here is a July 28 editorial in The Guardian (UK) declaring (hoping) that Venezuela is “on the brink of collapse”.

Watch this information posting for updates of news and analysis in the coming days.

Background coverage of the Constituent Assembly proposal and election, here on Telesur.