Venezuela confirms Coronavirus cases as US slaps on new sanctions 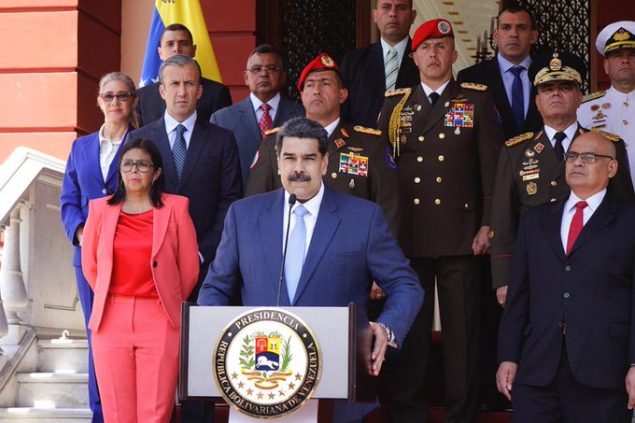 President Maduro decreed a “state of emergency” due to the coronavirus on Thursday. (Twitter/ @NicolasMaduro)

Venezuelan President Nicolas Maduro has denounced the difficulties in tackling coronavirus caused by US sanctions.

By Ricardo Vaz and Lucas Koerner

The Venezuelan government has confirmed the first cases of the coronavirus in the country.

Vice President Delcy Rodriguez announced on Friday that two people had tested positive for Covid-19 in Miranda State. Both had recently arrived from Spain, and all passengers who shared the flights have been ordered into quarantine.

In response, the government ordered the suspension of all school and university activities and the use of face masks in public transport.

On Thursday, Venezuelan President Nicolas Maduro decreed a state of emergency in the health sector as the country prepared for the coronavirus.

Speaking from Miraflores Palace, Maduro announced a one-month suspension of all flights from Europe and Colombia as well as prohibitions on mass public gatherings.

“The first measure we have to take is to suspend and forbid massive public gatherings and events, concerts, the closing of public spaces like museums,” he told press.

Maduro revealed that authorities had ruled out infection in thirty suspicious cases but warned that the virus could enter the country “at any moment.”

Venezuela was one of the last countries in the region to report active cases of coronavirus, which the World Health Organization elevated to the status of a pandemic on Wednesday.

Neighboring Colombia and Brazil had reported a growing number of active cases in recent days, totaling nine and 73 cases, respectively, as of March 12.

Maduro indicated that his government is considering closing its borders with both nations, but emphasized the need to first “coordinate with authorities in those countries and attend to the border population.”

In this regard, the Venezuelan leader sent a message to his Colombian counterpart, Ivan Duque, inviting him to “act jointly, as all governments in the world are doing, to protect Venezuela and Colombia.”

A stalwart opponent of Caracas, Duque met with US President Donald Trump on March 2 in Washington where he stated, “it is very important that we remain firm with sanctions.”

Since 2017, the Trump administration has imposed harsh economic sanctions on Venezuela, which in 2019 were escalated to include an oil embargo and a blanket ban on all transactions with Venezuelan state entities. The latest executive order also authorized secondary sanctions against third parties dealing with Caracas.

Maduro blasted US sanctions in his comments Thursday, claiming that it takes Caracas “three times the effort” to secure the necessary diagnostic equipment to deal with the initial stage of the coronavirus.

“This is a moment to demand that President Trump lift the criminal sanctions so we can tackle this situation,” Maduro said.

“The Trump administration remains committed to targeting those who support the corrupt regime’s exploitation of Venezuela’s oil assets,” Treasury Secretary Steve Mnuchin said in a statement.

All US-based assets in which TNK holds a larger than 50 percent stake are now blocked, and all US persons and companies are forbidden from dealing with it. TNK is the second Rosneft subsidiary to be targeted by unilateral US measures, after Rosneft Trading S.A. was sanctioned in February.

With sanctions driving companies away from purchasing Venezuelan crude directly, Rosneft had been buying up to 60 percent of the country’s oil output before rerouting it to other destinations. The White House has likewise threatened other foreign companies, including India’s Reliance and Spain’s Repsol, against continuing their involvement in Venezuela’s oil sector.