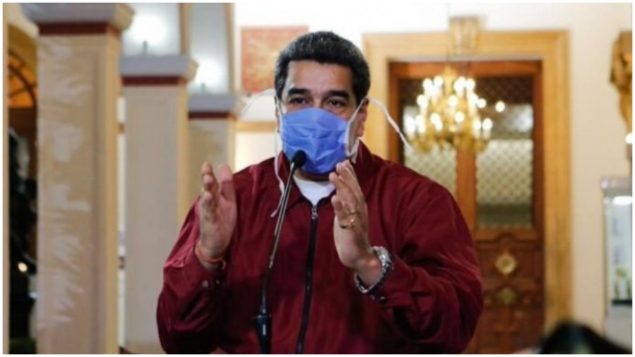 During the virtual summit of the Non-Aligned Movement (NAM), on May 4 the President of Venezuela Nicolás Maduro, gave an important and timely speech  in which he advocated for the establishment of a new world order based on solidarity and multilateralism, news that was entirely absent from the vast majority of the western mainstream media.

The President of Venezuela, Nicolás Maduro, advocated today for the establishment of a new world order based on solidarity and multilateralism, speaking at the virtual summit of the Non-Aligned Movement (NAM).
During the appointment convened in the videoconference regime, under the precept of United against Covid-19, Maduro stressed the importance of international cooperation to contain the scourge of the disease caused by the SARS-CoV-2 coronavirus.

The NAM must become the axis of a new world geopolitics, based on cooperation, solidarity, multilateralism and that rejects the use of force, unilateral sanctions and wars, ‘said the Venezuelan president.

In this sense, he denounced that the United States government maintains a criminal economic blockade that prevents the South American nation from buying medical supplies amid the greatest global health crisis of the last century.

‘We join the request of many countries to cease unilateral coercive measures’, Maduro said, stressing that Venezuela suffered the blockade of assets valued at billions of dollars, as well as the persecution of operations for the purchase of food, medicine and components for gasoline production.

Given this scenario, the President of Venezuela highlighted the support of international organizations and the solidarity of countries such as Cuba, China and Russia in the confrontation with the spread of Covid-19 in the South American nation.

He stressed that the performance of Cuban health professionals deployed in Venezuelan territory, together with the logistical support of the Chinese and Russian governments by sending thousands of diagnostic tests, was vital in containing the disease.

Maduro indicated that Venezuela has carried out to date more than 498,900 tests for the detection of Covid-19, for a rate of 16,000 per million inhabitants, as part of the massive screening actions that constitute the axis of the strategy. of this country in the fight against the pathogen, together with the social and collective quarantine.

‘We have managed to control the pandemic, and we are almost at the point of cutting the transmission chains’, said the president, noting that the South American nation reported only 357 cases and just 10 deaths as a result of the viral illness.

The President of Venezuela supported the call of the United Nations Organization to end all conflicts in the midst of the pandemic.

In this regard, he denounced before the Mnoal the failed attempt to incursion by a terrorist command trained in Colombia and financed by the United States government, in order to disturb the peace and perpetrate the assassination of the head of state.

Maduro said that in the next few hours the Venezuelan authorities will present evidence of the involvement of Washington and Bogotá in these events, while thanking the solidarity of the Mnoal countries in the face of terrorist threats.

Finally, the Venezuelan president suggested to the Non-Aligned Movement to apply to the World Health Organization for the Nobel Peace Prize, in recognition of that organization in the fight against Covid-19.