US seizes dozens of Iranian websites including state-run news outlets 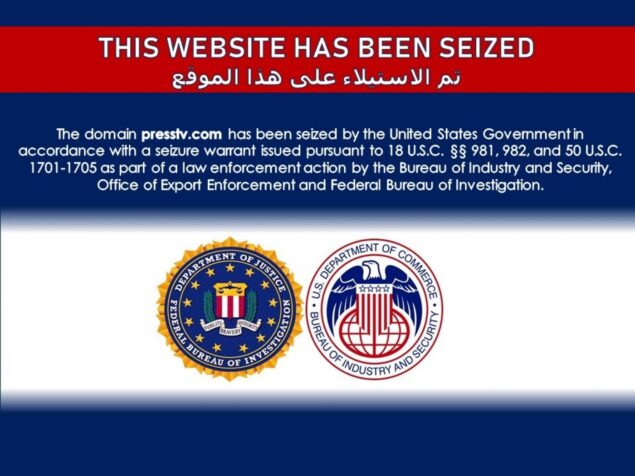 Press TV and Al-Alam News among the Iranian sites seized by the US, along with at least two sites affiliated with Yemen’s Houthi movement

Tehran warned on Wednesday that Washington’s seizure of 33 websites run by Iran-linked media was “not constructive” for ongoing talks on bringing the United States back into a landmark nuclear deal.

A US official told the Associated Press that the majority of websites, including state-run news outlets, were linked to Iranian “disinformation” efforts.

Notices appeared on Iran’s Press TV and Al-Alam, as well as two of the Yemen Houthi movement’s al-Masirah websites, all of which were taken offline on Tuesday with banners reading: “This website has been seized… by the United States Government in accordance with a seizure warrant.”

Iran’s state broadcaster accused the US of repressing freedom of expression, while the president’s office questioned the timing of the move as talks on bringing Washington back into the 2015 nuclear agreement between Tehran and major powers are reportedly making headway.

“We are using all international and legal means to… condemn… this mistaken policy of the United States,” the director of the president’s office, Mahmoud Vaezi, told reporters.

“It appears not constructive when talks for a deal on the nuclear issue are under way.”

On Monday, Raisi said there were “no obstacles” standing in the way of restoring ties with Iran’s regional rival Saudi Arabia, but ruled out the possibilities of meeting with President Joe Biden or negotiating over Tehran’s ballistic missile programme.

‘Trying to figure out what this means’

The websites were allegedly taken down in a joint operation by the Federal Bureau of Investigations (FBI) and the Bureau of Industry and Security. However, neither agency has independently confirmed the validity of the claim. 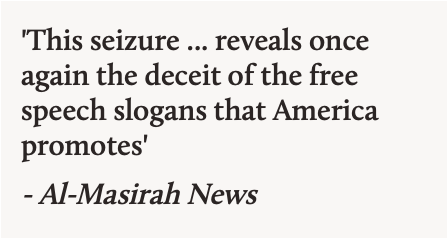 CNN also reported that it had received confirmation that the US was behind the seizures.

Asked about the websites during a news conference on Tuesday, State Department spokesperson Ned Price did not confirm or deny US responsibility for the takedowns, referring journalists instead to the Department of Justice, which oversees the FBI.

The DOJ did not respond to Middle East Eye’s request for comment by the time of this article’s publication.

Marzieh Hashemi, a prominent anchor for Press TV, told The Associated Press that the channel was aware of the seizure but had no further information.

“We are just trying to figure out what this means,” she said.

In a post to Twitter, the news agency shared a screenshot of the message that appeared in place of its website on Tuesday, saying it “seems to be a coordinated action” as a similar message has also appeared on websites of other “Iranian and regional television networks”.

In what seems to be a coordinated action, a similar message appears on the websites of Iranian and regional television networks that claims the domains of the websites have been “seized by the United States Government.” pic.twitter.com/JloU56LvpL

The banners say that the websites were seized under US laws that allow civil and criminal forfeiture of property involved in “trafficking in nuclear, chemical, biological, or radiological weapons technology or material, or the manufacture, importation, sale, or distribution of a controlled substance”, as well as a set of laws that deal with presidential authority concerning “unusual and extraordinary threats” and “declaration of national emergencies”.

IRIB has been sanctioned by the US since 2013 – and remained so even after the Obama-era nuclear deal – under a US law that gives the US Treasury Department the authority to designate those in Iran who restrict or deny the free flow of information to or from the Iranian people. Still, Press TV has remained operational.

The Houthi movement’s alternative domain for its al-Masirah news website, which remained operational, released a statement accusing the US of seizing its site “without any justification or prior notice”.

“This seizure of the almasirah.net and other allied websites reveals once again the deceit of the free speech slogans that America promotes,” the agency said. “We condemn this American piracy.”

The website, once registered under the domain “iran-newspaper.com”, is still offline but can now be found instead under “irannewspaper.ir”.

In 2012, Nicole Navas, an Immigration and Customs Enforcement spokeswoman, told Wired that the US government has the authority to seize any website ending in .com, .net or .org because the companies that have the contracts to administer the sites are based on US soil.