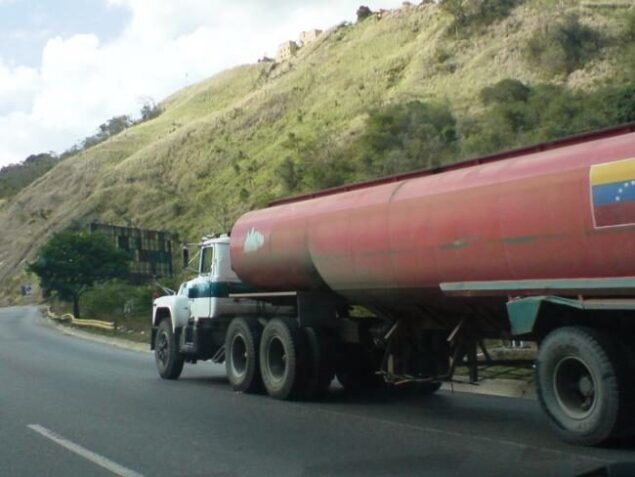 Western corporate media have time and again proved to be reliable allies for US regime change efforts against Venezuela. Alongside the occasional military threat, Washington’s strategy in recent years has relied on unilateral coercive measures commonly known as sanctions. Despite these measures being classified as “collective punishment” and found responsible for tens of thousands of deaths, corporate journalists have been for a long time happy to downplay or totally ignore them.

Western corporate media have time and again proved to be reliable allies for US regime change efforts against Venezuela (FAIR.org, 12/19/20, 1/22/20, 9/24/19, 6/26/19, 5/1/19). Alongside the occasional military threat, Washington’s strategy in recent years has relied on unilateral coercive measures commonly known as sanctions. Despite these measures being classified as “collective punishment” and found responsible for tens of thousands of deaths, corporate journalists have been for a long time happy to downplay or totally ignore them.

Coverage of the Trump administration’s Venezuela policy proved an interesting case study, with the media establishment momentarily putting aside its hostility to the right-wing former president in order to cheer on his crusade against the elected government in Caracas (FAIR.org, 4/15/20, 5/24/19).

Corporate journalists began to scrutinize the consequences of sanctions and complain about their “failure” to topple the Maduro government toward the end of the Trump administration (Vox, 9/9/20; New York Times, 11/1/20). But the arrival of President Joe Biden evidently reinvigorated their sense of duty as loyal stenographers serving the imperial presidency. As the US blockade becomes more asphyxiating to Venezuelans than ever before, corporate outlets have either turned their gaze somewhere else, or doubled down on misrepresenting sanctions.

As the November 2020 election approached, the Trump administration played some cards to boost its chances of winning Florida and, in the worst-case scenario, leave a couple of “hot potatoes” for a new White House tenant. These included putting Cuba back on the “state sponsors of terrorism” list and, in the case of Venezuela, banning crude-for-diesel swap deals.

As the situation worsens, Reuters (3/18/21, 5/19/21) has been on the scene to share the dramatic stories of farmers unable to sow or distribute crops, but less eager to admit that the devastation is the product of Trump’s October 2020 diesel sanctions. Rather, the corporate wire agency prefers to cloud the cause in mystery, presenting it as the object of an irresolvable debate.

“Critics, and many farmers, say sanctions are not the root cause of the shortages,” claimed Reuters (5/19/21). The oft-mentioned “root cause” is Venezuela’s nearly paralyzed refining industry (Reuters, 3/18/21). However, what this account conveniently leaves out is the well-documented fact that Venezuela’s refineries were likewise crippled by US sanctions, with the struggle to perform maintenance and secure spare parts compounded by a ban on diluent imports—chemicals needed to dilute crude oil into usable petroleum products like diesel and gasoline. 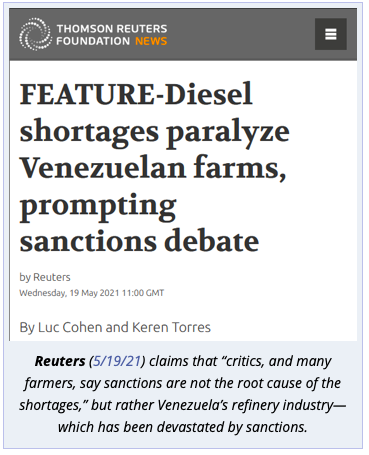 And regardless of the poor state of Venezuela’s refining capacity, the fact is that there had been no diesel shortages before the US Treasury’s hammer came down. In contrast, gasoline shortages have been a constant in recent years. Despite the crushing weight of sanctions, the Venezuelan government had prioritized securing diesel due to its critical importance.

Reuters will never allow facts to get in the way of a good imperial alibi, going on to repeat its “critics and many farmers say…” mantra in its subsequent reporting on diesel shortages (5/27/21). This specious argument is akin to saying “many Palestinians blame Hamas” for Israeli bombings, or that children in Israeli-besieged Gaza “may have been killed” by Palestinian militants.

In addition to covering up US responsibility for Venezuela’s economic devastation, Reutersjournalists Luc Cohen and Keren Torres (5/19/21) likewise retail the Venezuelan opposition’s talking points, stating that self-proclaimed “interim president” Juan Guaidó is working with Washington to “design a mechanism to allow diesel imports while ensuring Maduro does not use the fuel for corrupt ends.” Yet it is far from clear what those “corrupt ends” might be, since the same piece admits that the government distributes diesel free of charge.

Another fixture in the reporting on diesel shortages is allowing Biden officials to describe how serious (or not) the situation is. For example, Brian Nichols, noted sanctions enthusiast and nominee for assistant secretary of State for Western Hemisphere affairs, assured the Senate Foreign Relations Committee that Venezuela has enough diesel capacity “for the next six months or so” (Bloomberg, 5/19/21).

While corporate journalists paid little mind to this apparent confession that the current asphyxiation will take six months to kill, they were even less interested in factchecking the prediction. Specialized sources place the diesel crunch in a much shorter time window (S&P Global, 3/30/21; Argus Media, 1/20/21). Estimates vary, but a 40,000 barrel per day (BPD) deficit would mean that the country’s estimated 4 million barrel inventory as of early March would run out in a little over three months—i.e., some time in June.

Furthermore, if Nichols’ estimate were right, it would be reasonable to expect the government to increase supplies to food producers, given that it is sowing season, and crop shortages would mean another problem in a few months. However, Reuters (5/19/21) invited another Beltway bureaucrat, Juan Sebastian Gonzalez, to float the conspiracy theory that the Maduro government will “leave the people to suffer to help their international argument.”

Gonzalez, who serves as senior director for the Western Hemisphere at the White House’s National Security Council, also received a platform to echo yet another opposition talking point, namely that shortages are due to Venezuela “giving” diesel to Cuba. Ignoring the fact that the Havana/Caracas relations span a number of areas, with no less than 20,000 Cuban doctors currently in Venezuela, even obsessively anti-socialist outlets like the Miami Herald(3/11/21) recognize that diesel represents a “small portion” of exports, while Reuters places the shipments at 4,000 BPD, around 5% of daily demand (1/18/21).

In short, Washington can choke an entire country, accuse it of faking its suffering and not being close to “dying” while corporate media look the other way. 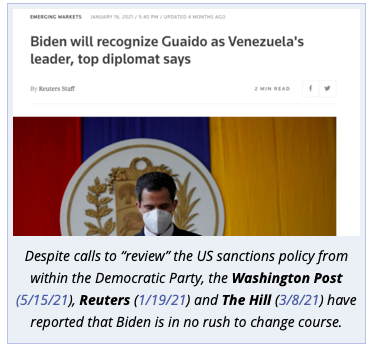 However, the new president has given no signs of a policy shift. From the get-go, Secretary of State Antony Blinken said the administration’s goal was to make the unilateral measures more effective (Reuters, 1/19/21). And as the sanctions bite harder, and the calls grow louder to at least reverse Trump and Elliott Abrams’ parting shot, the answer has been consistent: Biden is in “no rush” to change course (Washington Post, 5/15/21; Reuters, 2/28/21; The Hill, 3/8/21).

The new administration has been abetted in its neo-Trumpian foreign policy by a media establishment ever willing to present collective punishment of an entire population as “democracy promotion.” The fact that Trump’s brazen mob-style threats have been replaced by more sophisticated mafioso innuendo has certainly made corporate journalists’ life easier in this regard (FAIR.org, 4/15/20, 1/27/21).

The corporate media enthusiastically roll out the red carpet for (anonymous) officials to hold Venezuela’s economy hostage and issue a list of “demands” with which Caracas must comply. Deadly sanctions are thus a way for the US to “press for fundamental changes” (Washington Post, 5/15/21), “increase pressure” for “free and fair elections” (The Hill, 3/8/21) or even “isolate the socialist leader” (Maduro) (AP, 4/26/21). Buttressing this imperial blackmail is the ubiquitous falsehood that recent Venezuelan elections have been “fraudulent” (FAIR.org,1/27/21).

Corporate journalists are indeed in “no rush” to speak truth to power. 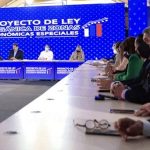 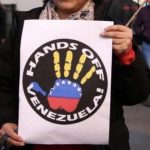