US nukes in Poland are a truly bad idea 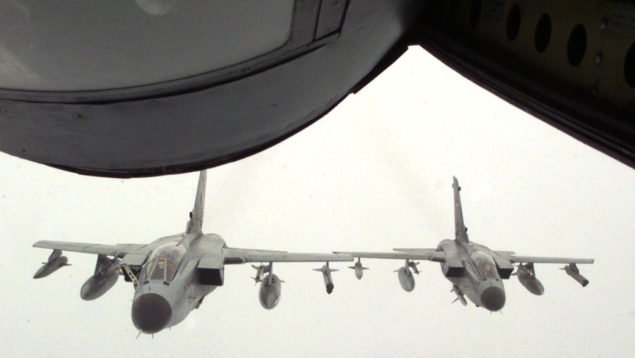 Steven Pifer hopes that U.S. Ambassador in Warsaw’s suggestion to relocate U.S. nuclear weapons based in Germany to Poland was just a mistake by a political appointee unfamiliar with NATO nuclear weapons issues, not a reflection of official U.S. government thinking.

On May 15, the U.S. Ambassador in Warsaw, Georgette Mosbacher, suggested relocating U.S. nuclear weapons based in Germany to Poland. One hopes this was just a mistake by a political appointee unfamiliar with NATO nuclear weapons issues, not a reflection of official U.S. government thinking. Moving nuclear weapons to Poland would prove very problematic.

The U.S. Air Force maintains 20 B61 nuclear gravity bombs at Buchel Air Base in Germany (as well as B61 bombs on the territory of four other NATO members). Kept under U.S. custody, the bombs could, with proper authorization in a conflict, be made available for delivery by German Tornado fighter-bombers. This is part of NATO’s “nuclear sharing” arrangements.

The Tornados are aging, and the German Ministry of Defense is considering purchasing F-18 aircraft to continue the German Air Force’s nuclear delivery capability. That has reopened debate within Germany about the presence of U.S. nuclear arms there, with Social Democratic Party (SPD) parliamentary leader Rolf Mützenich calling for their removal.

On May 14, U.S. Ambassador to Germany Richard Grenell wrote an op-ed expressing concern about not “eroding the solidarity that undergirds NATO’s nuclear deterrent” and calling for the SPD to affirm Germany’s commitment to nuclear sharing. The next day, Ambassador Mosbacher entered the fray, with a tweet suggesting that U.S. nuclear weapons could be relocated to and housed in Poland.

If Germany wants to diminish nuclear capability and weaken NATO, perhaps Poland – which pays its fair share, understands the risks, and is on NATO's eastern flank – could house the capabilities here: https://t.co/VIzpHIgoUN

This is a truly bad idea.

First, moving U.S. nuclear weapons to Poland would be expensive. Relocation would require constructing special infrastructure, such as WS3 underground storage vaults, and other equipment to ensure their security. The vaults normally are located within specially hardened aircraft shelters. While not a budget-buster, U.S. and NATO militaries have far more pressing needs to shore up the alliance’s deterrence and defense posture.

Second, deploying the B61 bombs in Poland would make them more vulnerable to Russian preemptive attack in a crisis or conflict. Russia has deployed Iskandr-M ballistic missiles in Kaliningrad. With a range of up to 500 kilometers, these missiles could strike targets in almost all of Poland within a matter of minutes and with very little warning.

Buchel, by contrast, would have longer warning time of an attack, and aircraft flying from there at least begin their flights out of range of Russian air defenses. The two major Polish air bases — which host Polish F-16s that are not, in any case, nuclear capable — are located within range of Russian S400 anti-aircraft missiles deployed in Kaliningrad and their radars.

Third, placing nuclear weapons in Poland would be hugely provocative to Russia. This is not an argument against provoking Russia in general — given itsprovocative behavior, including a military build-up, bellicose rhetoric, and use of military force against Ukraine. (Indeed, I called in 2014 for Washington to provide lethal military assistance to Ukraine and for U.S. and NATO forces to deploy to the Baltic states, steps that Moscow deemed “provocative.”)

But there is provocative and there is provocative. Putting U.S. nuclear arms so close to Russia would be the latter. Recall the 1962 Cuban Missile Crisis, when the Soviet Union placed nuclear weapons 90 miles from American shores. President John F. Kennedy imposed a naval blockade, which allowed time to work out a settlement with Moscow. In doing so, however, he set aside the recommendation of many of his advisers for air strikes and a full-scale invasion of Cuba.

Fourth, a U.S. proposal to relocate its nuclear weapons to Poland would prove very divisive within NATO. The members of the alliance stated in 1997 that “they have no intention, no plan, and no reason to deploy nuclear weapons on the territory of new [NATO] members.” They incorporated that into the “Founding Act” that established relations between NATO and Russia.

The security circumstances in Europe have changed dramatically and, unfortunately, for the worse over the past 23 years. Despite that, many NATO members still support the “three no’s” regarding nuclear weapons that the alliance adopted in 1997. A U.S. proposal to move the bombs to Poland would divide allies, cause some to question U.S. judgment, and prompt a broader nuclear debate within the alliance at a time when NATO should strive to show a firm and united stance toward Russia.

Relocating U.S. nuclear weapons to Poland would be expensive, militarily unwise because it would make the weapons more vulnerable to preemptive attack, unduly provocative, and divisive within NATO. This was a tweet best not sent. The one thing it does do, however, is give Mr. Mützenich a new talking point for removing the bombs from Germany; citing Ambassador Mosbacher, he can claim: “We can send them to Poland.”