US election: women, the young, the working class, the cities and ethnic minorities get rid of Trump 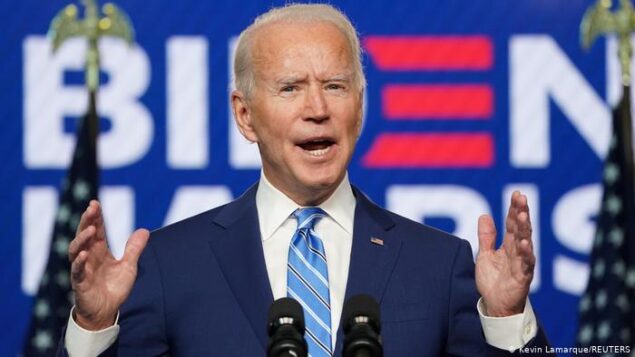 The Democratic party candidate, Joe Biden has beaten the Republican party incumbent Donal dTrump for the US presidency in 2020.  What can we learn from election result about the United States of America, the world’s greatest imperialist power, in the third decade of the 21st century?

The Democratic party candidate, Joe Biden has beaten the Republican party incumbent Donal dTrump for the US presidency in 2020.  What can we learn from election result about the United States of America, the world’s greatest imperialist power, in the third decade of the 21st century?

First, the voter turnout.  With not all the votes even now yet counted, it seems that about 150m Americans of voting age will have cast their ballots. Given that there were 239m eligible to vote, that means there was about a 62% turnout (VEP). 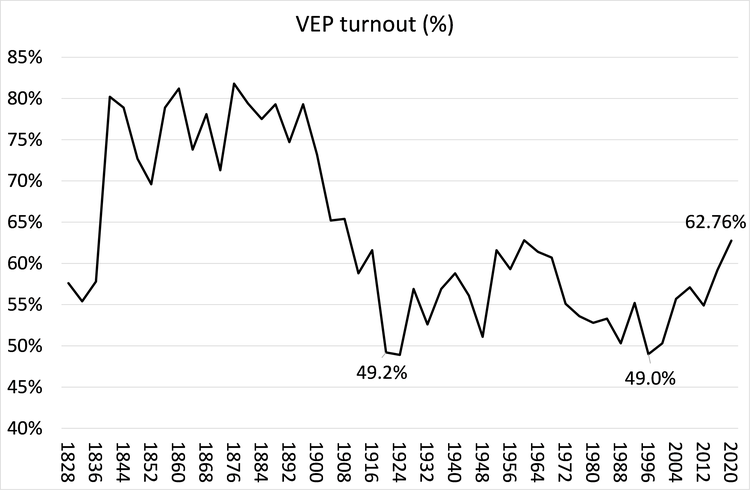 That’s better than in 2016 at 59% and the best turnout since 1960, but it’s not as high as many media forecasts were claiming on the day of the election.  It means that 37% of Americans entitled to vote did not do so.  That compares with 31.4% who voted for Biden and 29.6% who voted for Trump.  So once again, the No Vote party polled the highest national vote in the US election.

Moreover, there were another 20m voting age Americans excluded from the poll for various nefarious reasons (they had committed a felony or the state administration had refused their registration).  So the voting age turnout was just 58%, implying that a sizeable section of America’s working classes did not vote and/or were not allowed to vote.  Indeed, the ‘greatest democracy in the world’ has one of the lowest levels of voter participation of the major so-called ‘liberal democracies’. 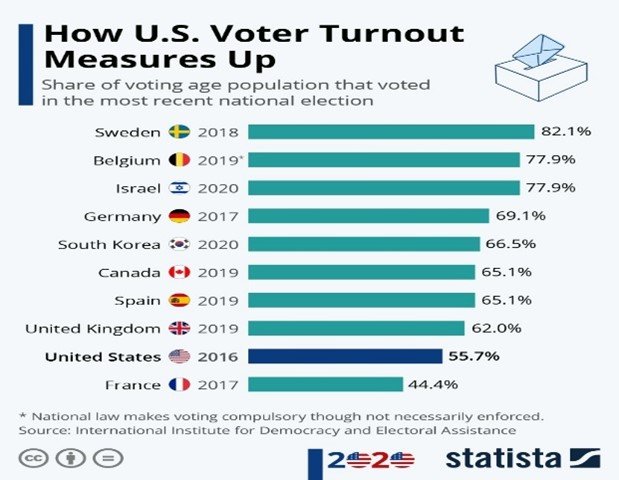 One large slice of the population that does not exercise its right to vote is young Americans. Less than half — just 43.4% — of eligible Americans under 30 voted in the 2016 presidential election. This was much less than the 71.4% of over-60s who voted. It was even lower in this election.

In the last eight presidential elections, the winner has polled less votes his main opponent. This is because the winner is the one that receives most ‘electoral college’ votes.  And those votes are recorded from each state of the 50-state union. It is the United States of America, a federal union of sovereign states as formed in the American revolution of the 18th century, with each state having its own laws and electoral procedures.  So building up huge votes in New York and California, the most populous states, for the Democrat candidate does not guarantee victory when narrow winning margins are achieved in lots of small states by the Republican candidate that add up to a majority in the electoral college.

So in 2016, Democrat Hillary Clinton polled 3m more votes than Trump overall, but Trump took 306 electoral college votes because he won very narrowly in a series of small to medium size states in the middle West. This time, Biden has polled even more of majority, probably about 4m, but the result appeared close because of the narrow margins in key ‘swing states’.  But this time Biden took those states back from Trump and on 6 January when the electoral college meets, he will get 306 electoral votes to win, the same as Trump got in 2016.

Another reason the election result was close is that in the Republican-run states, there has been significant gerrymandering of the voting boundaries, deliberate blocking of voter registration and in this election a desperate attempt to foil massive postal balloting during the COVID pandemic.  US ‘democracy’ is a joke.  According to the Economist, it is at the bottom of the pile as a ‘liberal democracy’, with only Albania scoring lower!

ELECTORAL INTEGRITY AND TYPES OF REGIMES

The reason the turnout was higher this time is partly the intense polarisation in America during the COVID pandemic and the economic collapse; fuelled by Trump’s demagogic tirades. But also the COVID pandemic lockdowns led to a massive increase in postal voting, an easier process for voters than going to the polling centres.  There were also significant grassroots campaigns in the big cities to get people registered and voting.

Can we learn anything from the demographics and economic composition of those who did vote?  The Votecast survey of voters gives us some clues.  According to the survey, male voters (47%) split 46-52 for Trump, but female voters (53%) split 55-45 for Biden. So women voters ensured a Biden victory. 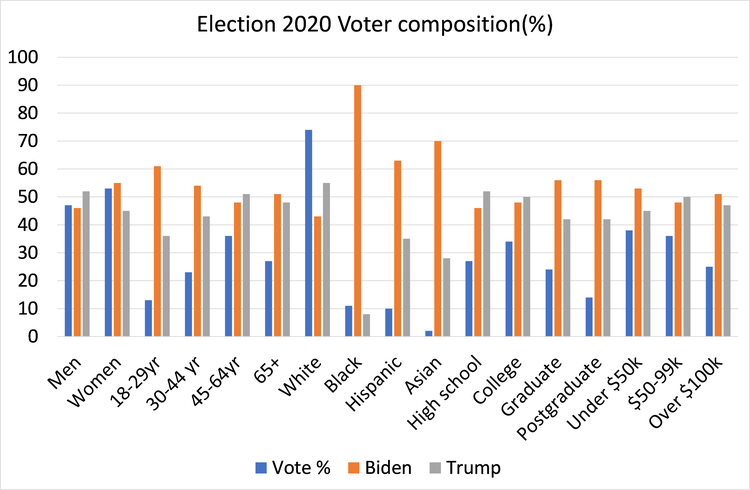 Much has been made of the supposed increased vote for Trump by black and Hispanic Americans this time compared to 2016.  But the evidence for this is dubious and even if true, the shift is tiny.  According to the Edison exit poll, there was a fall-off in support by white men for Trump compared to 2012 from 62% to 57% and small rise from white women from 52% to 54%. The supposed rise in support for Trump from black men was 13% to 17% and from black women was from 4% to 8%.  But considering that white voters were 75% of the vote and black voters were only 11%, the supposed shift to Trump from black voters is less than half the loss by Trump from white voters.  More Hispanic voters backed Trump this time, it is claimed, but still around two-thirds did not. 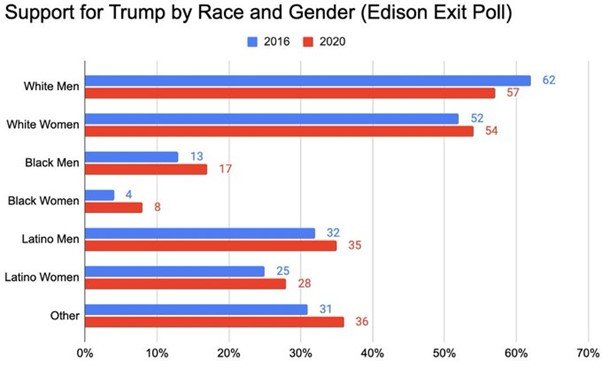 What about classes and incomes?  Well, by level of education, high school leavers (27% of voters) backed Trump 52-46; and those with some qualifications (34% of voters) again backed Trump but narrowly 50-48.  College graduates (a sizeable 24% of voters) heavily backed Biden 56-42 and postgraduate voters (some 14%) were even more strongly pro-Biden 56-42.  The more educated, the more Biden.

But that did not mean that working class Americans backed Trump more than Biden.  Those voters earning $50,000 a year (the median average income) or less backed Biden significantly 53-45, and they were 38% of voters.  Those in the middle-income group of $50-99k a year (36% of voters) narrowly backed Trump 50-48, while those earning over $100k a year (25% of voters) actually backed Biden 51-47.  The lowest paid Americans, the largest group of voters voted for Biden by a good margin, while the small-business people and middle income earners narrowly backed Trump. The better-off backed Biden (but I suspect that the higher up the income scale, the more votes for Trump, as other surveys show that millionaires heavily backed Trump).

Yes, there is a sizeable minority of working-class Americans that backed Trump, mainly in small towns and rural areas. But the majority of working-class Americans rejected Trumpism.  The urban areas (65% of votes) heavily backed Biden while the small towns and rural areas heavily backed Trump.  It was here that the polarisation in the vote was greatest.

What were the main issues of the election?  Two stand out: the COVID-19 pandemic and the state of the economy.  The pandemic was considered the most important by 41% of voters and those that thought so backed Biden heavily. The economy and jobs were regarded as the most important issue by 28% of voters who heavily backed Trump. Here was another clear cause of polarisation in America: lockdowns to save lives; or no lockdowns and save jobs was how many Americans saw it in 2020.

To sum up, Americans turned out for this election in slightly larger numbers, but the turnout was still way down compared to other ‘liberal democracies’. They voted even more strongly for the Democratic candidate than in 2016, but the constitutional peculiarities of the election system made the result quite close – although, more or less, in line with pollster forecasts.  Biden won because America’s ethnic minorities overcame the white majority.  Biden won because younger Americans voted for Biden sufficiently to overcome Trump majorities among older voters. Biden won because working class Americans voted for him in sufficient numbers to overcome the votes of the small town business-people and rural areas.

The US election was a mess; mirroring the mess that US imperialism is now in, with the COVID pandemic running riot across America and the economy on its knees with millions unemployed, wages slashed and public services paralysed. 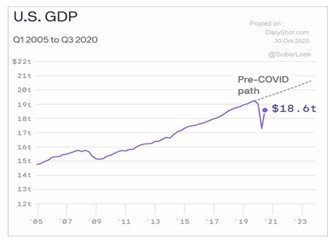 Biden had the backing of the majority of workers, ethnic minorities, young people and city dwellers.  They voted to get rid of Trump: but they may not expect much from Biden and they will be right.