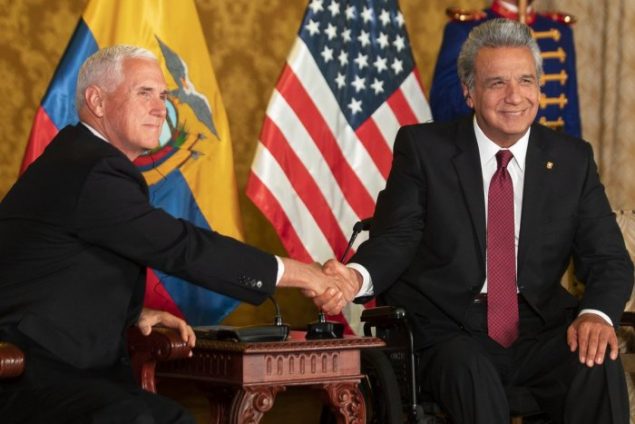 Ecuador’s former Foreign Minister, Guillaume Long, has sensationally claimed that the loan between the IMF and Ecuador was only agreed by the United States on the premise of Ecuador “handing over Julian Assange”. This article examines this claim in light of the radical political shift – from left to right-wing, pro US by Moreno and the economic situation in Ecuador.

The International Monetary Fund (IMF), a pro-neoliberal finance organisation based in Washington DC and chiefly backed by the United States, approved a massive $4.2 Billion loan to Ecuador just 4 weeks before the country withdrew political asylum for the co-founder of Wikileaks, Julian Assange, and invited UK police into the Ecuadorian Embassy in London to arrest him.

The IMF have stated that the loan was granted to support Ecuador’s President, Lenin Moreno – who was recently ousted by his party after reneging on his left-wing election platform in favour of a pro-neoliberal, pro-US agenda – in establishing “a more dynamic, sustainable, and inclusive economy” and to reduce the country’s “debt-to-GDP ratio“.

The IMF’s claims come despite the former President, Rafael Correa, overseeing massive reductions in poverty with a redistributive Socialist policy platform from 2006 to 2016, and despite the fact that Ecuador’s debt to GDP ratio is actually substantially better than either the UK or the USA.

Furthermore, Ecuador’s former Foreign Minister, Guillaume Long, has also sensationally claimed that the loan between the IMF and Ecuador was only agreed by the United States on the premise of Ecuador “handing over Julian Assange“.

In 2012, following the Wikileaks publication of a damning video which showed US troops killing 2 Reuters journalists and numerous unarmed civilians, the USA issued an indictment against Wikileaks co-founder, Julian Assange, on charges of espionage and computer hacking.

Shortly after, Assange entered the Ecuadorian Embassy in London and appealed to the then Ecuadorian President, Rafael Correa – a left-wing Socialist and fervent critic of the US – to grant him political asylum. Assange’s claim was approved in August 2012.

However, due to Ecaudor’s three-term limit for Presidents, Moreno was forced to retire from office in 2016. Subsequently, Correa’s Vice President from 2007-2013, Lenin Moreno, was elected to succeed him President of Ecuador in May 2017.

Not only did this drastic shift in policy direction cause a significant rift between Moreno and Correa – with the former President calling his successor a “traitor” to the “citizen revolution” and a “wolf in sheep’s clothing” – their centre-left Alianza Pais party’s national leadership committee unanimously ruled to remove Morenofrom his post as leader in November 2017. However, despite being removed as leader of the party, Moreno decided to continue as President.

In June 2018, Moreno then signalled his first significant shift in foreign policy, welcoming the US Vice President, Mike Pence, to Ecuador – a meeting which culminated in Ecuador buying weapons from the US, as well as an agreement between to the two countries to cooperate more closely on security and intelligence. Ecuador’s stance on Julian Assange’s political asylum was also reportedly discussed.

Then, in February 2019, the so-called INA papers were published – leaked documents which claim to expose the operations of INA Investment Corp, an offshore company created by the brother of Ecuadorian President Lenin Moreno, with Wikileaks reporting:

“The trove of emails, phone communications and expense receipts are said to link the president and his family to a series of corrupt and criminal dealings, including money laundering and offshore accounts. The leak has sparked a congressional investigation into President Moreno for corruption. Moreno can’t be summoned for a criminal probe while he remains president. He is currently being investigated and risks impeachment.”

Just a few weeks later, in March 2019, the IMF confirmed that it had approved a $4.2 Billion loan to Ecuador to provide “support for the Ecuadorean government’s economic policies“, with the US-backed, neoliberal organisation also stating:

“The Ecuadorian authorities’ plan aims to create a more dynamic, sustainable, and inclusive economy for the benefit of all Ecuadorians. It is centered around four major priorities; boosting competitiveness and job creation; strengthening fiscal sustainability and the institutional foundations of Ecuador’s dollarization; protecting the poor and most vulnerable; and improving transparency and bolstering the fight against corruption.”

The IMF loan forms part of a much larger $10 Billion package, with $6 Billion also being provided by other proponents of neoliberalism, the World Bank, the Inter-American Development Bank, and the CAF Andean development bank.

Following this, on April 11th 2019, Ecuadorean officials made the decision to allow UK police to remove Wikileaks co-founder, Julian Assange, from the Ecuadorean Embassy, and arrest him.

Assange currently remains in custody in the UK over charges of breaching bail. But, with charges of hacking also pending in the US, the UK government now faces a decision on whether to extradite him.

“I think there are two main explanations for Ecuador’s revoking asylum and what we saw yesterday with the arrest of Julian Assange in the Ecuadorian Embassy. The first is clearly Lenin Moreno’s realignment with the United States. There’s been a dramatic change since May 2017, since Moreno came to power, in terms of Ecuador’s foreign policy. Its real, strong, sort of unambiguous alignment with the Trump administration. And you’re seeing changes with regards to his policy towards Venezuela. You’re seeing Ecuador sort of getting out of UNASUR, despite the fact that it’s UNASUR headquarters. You’re seeing almost issues with Chevron Texaco, which is a big issue for Ecuador, and the contamination of the Amazon where it puts them in a very strong position. You’re seeing the Moreno administration moving very close to the U.S. position and going back into the U.S. sphere of influence, and sort of abiding to what is now officially the rebirth of the Monroe Doctrine.

That’s one set of reasons. And the recent allegations of the New York Times that the IMF loan had been conditioned–just below $4 billion, or a little bit over $4 billion IMF loan – agreed between the IMF and Ecuador – was agreed by the United States upon sort of handing over Julian Assange. That’s the first reason. The second reason, I think, is a more sort of personal, I would say even vindictive, reason. Moreno is facing some very serious corruption allegations. They just discovered two bank accounts, one in Belize, one in Panama, held by his brother, where it appears that there have been bribes deposited on those bank accounts. And then money spent by Moreno himself in various parts of the world, including in Spain, where he appears to have bought an apartment.”

What is clear is that, since the election of Moreno in 2017, Ecuador’s stance has shifted substantially towards the interests of the United States, and significantly against public opinion in Ecuador.

Even before the decision to revoke support for Assange, Moreno’s approval ratings within the country were diabolical – with just 17% saying they trust the President’s word, and his approval ratings plummeting from a high of 65% in 2018 to an historic low of just 26.85% in a single year.

Under the policies of the former President Correa, relative poverty in Ecuador dropped by a staggering 38% from 2007 to 2016, and extreme poverty declined by 47% in the same period – with the incredible reduction in poverty being many times greater than that of the previous decade.

Furthermore, despite having to negotiate significant global economic shocks throughout his tenure, Correa’s policies of public investment and redistribution managed to treble the rate of GDP growth, from 0.6% annual growth from 1980-2006, to 1.5% in the period from 2006-2016.

As the Centre for Economic and Policy Research reports:

“The combination of institutional reform; traditional expansionary fiscal policy; and innovative, heterodox measures helped minimize the losses of output and employment from the external shocks. As a result, per capita GDP growth was substantially higher than in previous decades, and along with government policies of greatly increased social spending and public investment, Ecuador was able to achieve economic and social progress, as well as political stability, whichfar exceeded that of prior decades.”

Moreover, Correa’s highly successful redistributive policies hardly caused a blip in Ecuador’s national debt levels – with the country’s debt to GDP ratio only rising by 10%, from 28% in 2006, to a peak of 38% in 2016. In comparison, the UK’s debt to GDP has more than doubled from 40% to 88% in the same period, whilst the USA’s debt to GDP ratio has absolutely skyrocketed to around 108%.

Given that the statistics show that Ecuador’s economy is faring far better than the two biggest proponents of neoliberalism, the IMF’s monstrous loan to the South American nation – ostensibly under the guise of debt reduction – seems particularly peculiar.

With Ecuador’s significant shift towards US-backed neoliberalism under Moreno, coupled with allegations of corruption already circling around the much-maligned and clearly unscrupulous President, the astonishingly coincedental concurrence between the IMF’s multibillion dollar loan and Ecuador’s capitulation to US pressure over Assange will surely leave a lot of people asking extemely pertinent questions.