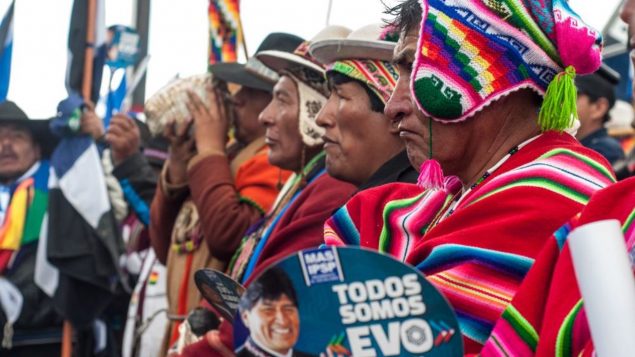 Workers World Bulletin: As of 4 p.m. EDT on Nov. 10, President Evo Morales has resigned his office in Bolivia, pushed out by a counterrevolutionary coup d’état backed by Washington. After part of the police force joined the counterrevolutionary gangs and the heads of the Armed Forces advised him to resign, Morales took this step as the best of bad choices after consultation with the Bolivian Workers Confederation (COB) and other supporters of his government.

This has all happened in the 24 hours since Marco Teruggi wrote the article below, which was first published Nov. 9 by TeleSur, translated by Resumen Latinoamericano’s North America bureau and edited by Workers World. Although superseded by Nov. 10 events, Teruggi’s article still presents the forces in action in the landlocked country of 11.6 million people, a majority of whom are Indigenous.

Workers World joins those progressive forces all around Latin America and the world who are condemning the U.S.-backed counterrevolutionary coup, including the governments of Venezuela and Cuba, and also Lula da Silva of Brazil, who was released from prison just days earlier.

These are the days and hours of the coup offensive in Bolivia. The attempt to overthrow President Evo Morales is gaining strength, territory and itscapacity for action. It’s like an announced bullet that arrives from the front and has a date: before Nov. 12.

That day the country will know the result of the audit in which the Organization of American States is participating to see if there was any fraud in the Oct. 20 elections that gave Morales and his MAS party a victory in the first round. Those who are in the leadership of the coup want an outcome before that day, and they believe they can make it happen.

They have several elements in their favor. In the first place, they have a mobilized social base that believes it can win, is heterogeneous, and gathers accumulated discontents by holding exclusive racist discourses and public events in the conservative/colonial country. That base has strength in the cities of Santa Cruz, Cochabamba, Potosí [in the east], and in La Paz — the final objective of the assault [and the administrative capital].

Secondly, shock troops — groups for confrontation — have accumulated strength from the east to La Paz. Their movement followed the direction of the coup’s strength: the city of Santa Cruz acts as a strategic rearguard in the center of the country. It is in this area where [the right wing] carried out the most violent attacks, and La Paz is the point where state power is concentrated.

These groups are in the process of mobilizing and moving toward La Paz, where some have already carried out siege actions surrounding the government palace on previous nights. One of the objectives of the offensive is to succeed in gathering together all the different elements of opposition [to the MAS government] and to reinforce the mobilization with sectors coming from different points in the country to La Paz.

Thirdly, [there is] the leadership of Fernando Camacho, who went from heading the Santa Cruz Civic Committee to setting up his base of operations in La Paz and projecting an image of national leadership. His speeches seek to distance himself from all acts of racism, separatism and coup d’état, in an attempt to shift the accusations away from him and to bring in other sectors of society.

The expansion of these three factors seeks to unleash, through an escalating offensive, the outbreak of three others. The first goal they aimed at, and that has been achieved in part, is influencing the Bolivian National Police. The images of riots on Friday night and Saturday morning [Nov. 9] showed how a sector of the police have been influenced to join the coup process.

The second target is the Bolivian Armed Force, a central element for a coup d’état to be successful, which up until noon Saturday [Nov. 9] has shown no public sign of a possible internal breakdown.

The third target is the popular sectors, which for the moment are playing no part in the mobilization demanding the dismissal of Evo Morales. But some groups, like the Association of Coca Producers of the Yungas or mining sectors, have been present at the [reactionary] mobilizations.

The calculation of this set of factors, interconnected and projected with the greatest force, has created a scenario in which the coup leadership claims that the departure of Evo Morales is the only possible solution and that this will take place in a matter of hours or days.

Within this leadership, in a lesser capacity, is Carlos Mesa, who came in second in the presidential vote on Oct. 20, and has been able to align himself with the narrative of those who are giving the ultimatum. Along with Camacho, Mesa rejects the OAS audit but leaves some room for maneuver in case of the defeat of the coup attempt.

Up to now, Morales seeks to avoid confrontation

The government’s objective, both that of President Morales and the social movements that support him, seems to be to contain the escalation of the coup until the result of the audit. Within this framework, [pro-Morales] mobilizations have taken place almost daily, led by different organizations, such as the Bolivian Union of Workers and the Bartolina Sisa Women’s Confederation.

The president’s call has been to defend the results of the election, the process of change — democracy — without opening the doors to the scenario of confrontation that the rightists are trying to generate. This means Evo [Morales] has rejected the rightists’ attempt to increase acute violence, which would lead to wounded and dead people.

This is a complex and increasingly unstable scenario. The outcome of the audit could lead to different conclusions. The United States has made clear from the outset that its position is that the result of Oct. 20 was invalid. Washington has claimed that the path of the audit decided by the OAS should be followed. That means, to a large extent, whatever the U.S. itself decides.

The government has stated that the outcome of the audit will be binding and that it would be willing to call for a second round [of elections] if that emerges as the result. In that case there could be a division within the opposition between those who would be willing to participate in the election and those who would not. Would Carlos Mesa accept [a new election] and retreat from speaking in favor of the coup?

There are still many hours and days until Nov. 12 in the [rightist] offensive framework that is accumulating strength and capacity for destabilization. The government, [and] the process of change [represented by Morales and MAS], still has cards to play to contain and de-escalate the situation. 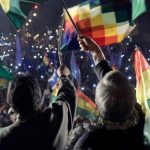 We stand against the coup in Bolivia (statement from Noam Chomsky and Vijay Prashad)Bolivia, Evo Morales, Latin America and the Caribbean 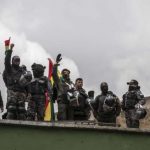 Bolivia in crosshairs of US counter-revolutionBolivia, Evo Morales, Latin America and the Caribbean