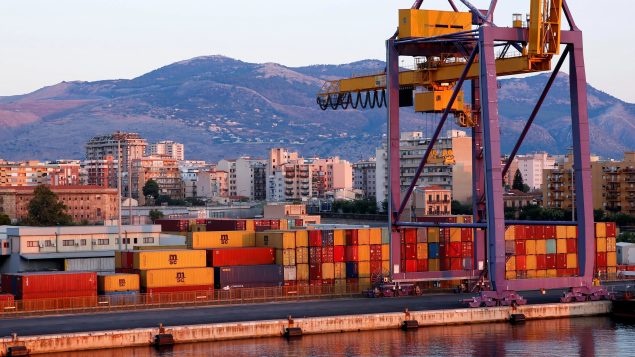 China can expand its access to the Mediterranean Sea by investing in Italian ports, such as this one in Palermo, through the Belt and Road Initiative
© Reuters

Intent on weakening China, neo-con forces in the US are looking on developments between Europe and China for the Belt and Road Initiative with increasing alarm.

This is an important year for Europe as economic slowdown is likely – the IMF projects EU growth will fall from 2.1% in 2018 to 1.6% in 2019. Regarding major external influences which can improve or worsen this situation, the US will also slow, the IMF projecting a decline in growth from 2.9% to 2.3% for the whole year, while China’s growth is expected to be far higher at 6.0%-6.5%. Given this situation, unsurprisingly, important European countries are an showing increasing interest in China’s Belt and Road Initiative (BRI).

Italy became the first G7 country to sign a BRI agreement. Switzerland, not an EU member but an internationally important European economy, did likewise. This followed previous initiatives such as Britain’s early endorsement of the China originated Asian Infrastructure Investment Bank, into membership of which the UK was followed by Germany, France, and other European countries, and the 16+1 meetings of Central and East European countries with China.

US ‘neo-con’ forces, aiming to weaken China, look on this development with alarm. For example Foreign Affairs, the most important US foreign policy journal, recently published an article by Andrew Small, Senior Transatlantic Fellow with the Asia Program at the German Marshall Fund of the United States, warning ‘China’s political reach and influence in Europe are undoubtedly growing’ – a development he was deeply hostile to. The US has similarly applied strong pressure to attempt to get European countries to cut China’s telecoms company Huawei out of development of European 5G.

The problem for such US attempts to block European cooperation with China is that the US has little positive to attract European countries to cooperate with it. The US is not only growing less rapidly than China but the Trump administration’s protectionist steps make the US even less attractive.
US foreign policy towards countries other than China also damages Europe. Notably, Iran is not a big US market but is potentially significant for Europe – the EU stood to gain from lifting of sanctions under the Obama administration’s Iran nuclear weapons deal and is damaged by the Trump administration’s unilateral reimposition of them. The US has also been attempting to get Germany to abandon its Nord Stream 2 gas pipeline, under the Baltic Sea, which guarantees Russian gas supplies to Germany without interference by countries such as Ukraine – and cancelling which would make Germany more dependent on expensive US liquid national gas supplies.

Other US policies have less direct but also damaging effects on Europe. In particular, US military action against Iraq, Libya and involvement in the civil war in Syria caused a massive Middle East refugee exodus creating significant problems for Europe – as well as bases for terrorism in European countries.

Even leaving aside indirect effects in the Middle East, this combination of US policies – cutting out Huawei, thereby making European 5G delivery slower and more expensive, Iran sanctions, making Germany’s gas supply less secure, and attempting to weaken Europe’s cooperation with China’s rapidly growing economy – all directly hit Europe. As the US has little to offer positively it therefore has to primarily rely on the stick, not the carrot, in relations with Europe. Giving in to such sticks, however, worsens European countries economic position and thereby creates domestic political problems. Consequently, among Europe’s general public the US’s leadership is currently extremely unpopular – the latest European wide Gallup opinion poll showing only 24% approving of the US’s leadership and 59% disapproving.

The available US sticks are clear. Western Europe is disunited and weak militarily, unlike Russia, and the US is seen by European governments as crucial for their defence. The US also controls the international financial system and is able to threaten unilateral sanctions – as with Iran.
The result of such sharply opposing forces is therefore political conflict in European countries. On one side are those seeking to improve their country’s economic situation, including by cooperation with China, and on the other those favouring giving in to US demands – even if this damages their own country’s economy and therefore its political stability.

Given such trends the US has shifted from its traditional policy of general support for the EU to active intervention in domestic affairs of European countries. This can be seen clearly over individual issues – the reported decision by the British government to allow Huawei to participate in the roll out of 5G in the country is openly attacked by pro-Trump politicians and media for example. Even more widely it is seen in overt US hostility to Merkel in Germany, the Trump administration’s support for Brexit, and attempts to block Italy from participating in the BRI. Given the large scale of forces involved on both sides these clashes, which centrally involve Europe’s relations with China, will last for a significant period.

This article originally appeared in Chinese at Global Times.