In early December, President Vladimir Putin delivered his annual address to the Federal Assembly. I believe anybody reading this column would have been able to shorten that speech to just one or two words; awful or really awful (I’m being polite). It has certainly been the worst year for the ruble since 1998 and also the worst for investors and businesses over the past 15 years. 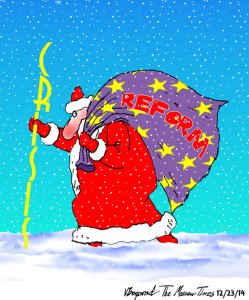 Not because of the scale of the stock market or economic collapse — the second half of 2008 was much worse for the former and 2009 worse for the latter — but because of the reasons for the collapse and the uncertainty over what happens next. In 2009 the issue was a relatively straightforward economic problem. As we head into 2015 it is the geo-political overhang which causes the greater concern.

One of the reasons why 2014 has been such a bad year for the markets and the economy is because the foundations upon which the economy and asset valuations are supported were already in a weakened state well before the events of this year piled on the pressure. I have written several times about the specific reasons for the decline in the economy through 2013, i.e. from 3.4 percent growth in 2012 to only 1.3 percent last year.

The summary point is that the country had lived too long on hydrocarbon export revenues, which totalled $3 trillion since 2000, without any serious effort to reform the economy and simply ran out of time. To be exact, it ran out of growth drivers as the consumer retrenched and capital investment fell.

So 2014 was always going to be a difficult year and, in anticipation of that, this is why the stock market and ruble both fell in 2013. They fell harder in January and February even though the oil price held close to $110 per barrel and ahead of the Crimea referendum.

Investor sentiment and business confidence is also a big factor in how an economy and markets behave. In that respect, 2014 was probably the worst year ever for Russia, certainly if one counts the number of international magazine covers which variously demonized Putin or predicted the destruction of the economy and the imminent arrival of a color revolution.

By the time we got to the Crimea vote in mid-March the extraordinarily disproportionate coverage coming up to the start of the Winter Olympics had firmly set the tone. Moving on to headlines that claimed Russia was about to invade former Soviet states was effortless.

The financial sector sanctions which, in combination with the falling oil price, collapsed the ruble not just past a few proverbial lines in the sand but as a bulldozer through whole sand dunes. That also seemed almost inevitable in a year when nothing seemed to be in Russia’s favor.

But actually that is not quite correct. There were a few bright spots and although the light at the end of the tunnel is no more than a flickering candle buffeted by a breeze, the light is still there. The ruble collapse has not been all bad. True the weaker currency is a big part of the reason why inflation will likely hit 12 to 13 percent in the first half of next year and why interest rates will inevitably climb higher before, possibly, starting to roll back next summer. But the ruble collapse has fully protected federal budget revenues this year and allowed for modest surplus while spending has risen by more than 10 percent.

The weak ruble, along with Russia’s self-imposed ban on food imports in August and on some meats from earlier in the year, has also helped boost demand for domestic sourced goods. That of course is only a limited positive as Russia makes relatively few consumer products and even where it does, a big portion of the parts are imported.

The other positive from the ruble collapse is the way people have reacted — they hardly did. Such a major collapse in most other countries would have led to a run on the banks and social unrest. I worked in Bangkok in 1997 when the Baht fell — or was pushed — off a cliff and some banks closed as people took to the streets. The relative strength of Russia’s balance sheet and fiscal position would certainly be much worse today had the government had to use more of its savings to stave off social unrest and a bank sector crisis.

Britain’s wartime Prime Minister Winston Churchill famously remarked that the United States is a country “which can be relied on to do the right thing after it has exhausted all other possibilities.” That comment is also applicable to Russia. Crisis can, and often is, a catalyst for change.

Unfortunately the last crisis, in 2008-09, did not last long enough to produce any meaningful changes or reforms. This one will certainly have that longevity and will provide the opportunity for a more serious effort to push reforms. The evidence of actions taken, and not taken this year is encouraging that Putin is more focused on eventually getting back on an investment-led growth track than in expanding the confrontation beyond the serious stage already reached.

Through his clear statements and the actions of the government, Putin has made it clear that there is a very distinct line between political rhetoric and the wish, actually need, to remain open for all sources of business and investment. If that were not the case, McDonald’s on Pushkin Square would not have re-opened, Russian bank cards would not work abroad and the Hong Kong flight from Frankfurt would already be several hours longer.

There have also been more visible positives this year. Who knew that Russians understood irony? Recall the closing ceremony at the Sochi games which made fun of the failure to light all of the Olympic rings during the opening ceremony? The games were also grudgingly accepted as being a success by those who predicted either a security or administrative nightmare.

The Sochi Grand Prix also raised many eyebrows — it seems few people realized there are palm trees in Russia. The summer was also great, being warmer and seemingly longer than usual, albeit now a fast fading memory.

Every crisis is bad but not all crises leave a bad legacy. Sometimes a crisis is useful to shake things up. But that’s for next fall … or next winter … or the one after that.

Forbes writer says new U.S. sanctions against Russia are folly and dangerousBackground, Russia
Ukraine is a prize neither Russia nor the West can afford to winBackground, Ukraine