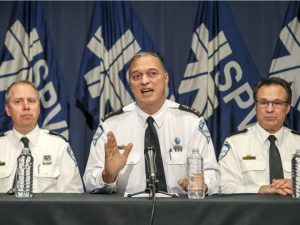 A controversy over police surveillance of the press in Quebec deepened Wednesday with revelations that six journalists, including some of the province’s top investigative reporters, had their cellphones surreptitiously monitored by provincial law enforcement as far back as 2013.

The disclosures made by several media outlets and confirmed by the provincial Sûreté du Québec suggest that covert police surveillance of Quebec journalists dates further back and is more widespread than previously known.

La Presse revealed this week that one of its journalists, columnist Patrick Lagacé, had his iPhone data tracked by Montreal police for months this year after they obtained search warrants. On Wednesday, Quebec provincial police said it had also obtained court warrants to monitor the log of incoming and outgoing cellphone calls of six journalists.

The raft of disclosures has fueled a growing sense of alarm over state surveillance of the press. On Wednesday evening, Quebec Public Security Minister Martin Coiteux told reporters his department would lead an administrative probe into the 2013 surveillance case at the Sûreté du Québec. It had been requested by its current director-general, Martin Prud’homme. The force was under the leadership of another chief, Mario Laprise, in 2013.

“According to the information I have, this would be the only case in the last 20 years affecting journalists targeted by a Sûreté du Québec investigation,” Mr. Coiteux said in Quebec City.

Still, news that more journalists were being spied on through their cellphones left several in the media industry shaken and led the executive director of news and current affairs at Radio-Canada, Michel Cormier, to refer to the situation as an “unprecedented crisis.” The five that have been identified are affiliated with Radio-Canada, La Presse and Le Journal de Montréal.

“What floors me is that this is no longer the culture of the Montreal police service,” Isabelle Richer said on Radio-Canada, where she is a journalist. “It’s also the Sûreté du Québec. So it’s a generalized hunt for sources.” On Twitter, she called the news “surrealistic.”

Police say the calls were not wiretapped.

Events that led to the surveillance are also raising eyebrows. They began when Michel Arsenault, former head of the Quebec Federation of Labour, was angry about media reports that he had been the subject of police surveillance. The police actions were part of a criminal investigation into the infiltration of organized crime in the construction industry in Quebec.

Mr. Arsenault complained about the media leaks to the Public Security Minister at the time, Stéphane Bergeron of the Parti Québécois. The Sûreté du Québec investigation into finding the source of the leaks began soon afterwards.

Captain Guy Lapointe of the Sûreté du Québec said in an interview the current head of the provincial police force, Mr. Prud’homme, is “very irritated” and “preoccupied” that the surveillance had been ordered by his predecessor.

The fresh revelations have given added urgency to opposition calls in Quebec City that the Liberal government of Philippe Couillard hold an inquiry into the controversy. On Tuesday, the Premier attempted to get ahead of the controversy, announcing measures to tighten rules for obtaining search warrants against journalists and striking a panel of experts to look into the situation.

In Ottawa that day, federal Public Safety Minister Ralph Goodale told reporters his government is open to toughening the rules that govern how and when the federal government can investigate members of the media.

For investigative journalists, reliance on confidential sources is crucial in exposing wrongdoing and holding powerful interests accountable. And investigative journalism played a central role in Quebec in exposing corruption in the construction industry, which led to the creation of the Charbonneau Commission. The public commission produced a report [in November 2015] exposing the wide reach of corruption in the province’s multibillion-dollar public construction industry and its links to organized crime.

Meanwhile, La Presse is seeking to have the data collected on Mr. Lagacé sealed. It sent the Montreal police force a lawyer’s letter on Wednesday demanding it refrain from accessing the information until a judge rules on a motion on the case.

“We think it would be a significant problem if the data was accessed by anyone because it would tend to identify the confidential sources of Mr. Lagacé,” Sébastien Pierre-Roy, lawyer for La Presse, said in an interview.

“The absence of precautions taken during the collection of data from Mr. Lagacé’s cellphone to protect confidential sources is a scandal and an unprecedented attack on the freedom of the press,” Mr. Pierre-Roy wrote in the letter to police.

In addition to the six reporters, media reports have found that three Quebec journalists had recently been the object of police attention. Police did not obtain court warrants but had scrutinized the call logs of its officers to find out who had been speaking to the reporters.

Editorial: Montreal police monitoring of journalist is a grotesque attack on the free press, Oct 31, 2016

Montreal Mayor Denis Coderre’s reaction to Monday’s revelation that Montreal police, with the approval of Quebec court judges, electronically monitored a journalist was unacceptable. While the Quebec government’s response was encouraging, the mayor pronounced keywords that imply concern while simultaneously reiterating his support for the police chief, whom he had nominated…

How Montreal police were able to use legal means to track a journalist, by Melissa Fundira, CBC News, Nov 1, 2016

Cellphones of journalists tracked in 2013 following complaint from union boss

Quebec provincial police confirm that six members of the press were spied on in 2013 as part of a police investigation that was launched on the same day that a labour union boss filed a complaint.

Three Radio-Canada journalists said they found out today, via unnamed sources, that the Sûreté du Québec was tracking their portable phones. This comes just days after a Montreal newspaper columnist said he was similarly tracked by that city’s police force.

Marie-Maude Denis and Isabelle Richer, the current hosts of the Radio-Canada investigative program Enquête, as well as the show’s former host Alain Gravel, said this afternoon that provincial police were tracking their incoming and outgoing calls and texts.

“I’ve just learned that my incoming and outgoing calls have been spied on by the Sûreté du Québec in 2013,” Denis tweeted in French.

“My turn to get a confirmation that I was targeted by court mandates to obtain a log of my calls by the SQ,” Gravel said.

“Surreal … The SQ spied on my cellphone following a formal complaint made by Michel Arsenault in 2013,” Richer tweeted.

Arsenault’s name came up a number of times at the Charbonneau Commission when, in 2013, the province’s anti-corruption inquiry turned its attention to unions. The then-president of Quebec’s Federation of Labour (FTQ) came under fire after witnesses testified that Arsenault was aware of alleged links between some union leaders and organized crime but did nothing about it.

He had also been involved in a legal battle with the commission over wiretaps of his phone conversations, gathered by police in an investigation unrelated to the anti-corruption inquiry.

Arsenault sent a letter of complaint to the SQ after news that he was the subject of a police investigation was being made public.

“Michel Arsensault was under scrutiny at the time. He was upset, so he complained to the SQ, which forced police to do an inquiry … So they decided to ask for this warrant to spy on our cellular phone,” Richer said. ‘We still have sources’

Richer said the three learned they had been spied on by police thanks to unnamed sources.

“We still have sources. A source told us today that we were the target of this warrant in 2013, and maybe before. Maybe we were spied for a long period of time. We don’t know because those warrants are still sealed,” Richer said, adding that today’s revelations show that spying on journalists is systematic.

“What floored me is that this is no longer the culture at the SPVM,” she said, referring to the Montreal force by its French initials. “It is also the Sûreté du Quebec.”

“It’s a shock,” said Gravel. “In a democratic society like ours, you never imagine that this thing could happen and be so systematic. It’s two events now in the same week. So we’re very concerned.” Only case in 20 years, SQ says

The Sûreté du Québec responded to the revelations late Wednesday afternoon, confirming the allegations but adding that it was the only such case in the last 20 years. “We’re talking about one case, which is one case too many, but one case going all the way back to 1995,” SQ spokesman Capt. Guy Lapointe told CBC.

“The investigation targeted different individuals, some of them were reporters.”

The SQ said that the investigation was closed and sealed in 2014. Current staff only found out about it now because they started looking into their procedures after the province yesterday asked police forces to investigate how they go about getting warrants.

Lapointe said that since 2013, new people and new protocols are in place at the SQ. “You have to understand that this occurred with the prior administration of the SQ.…Any investigation that is targeting a reporter…[now] needs to be authorized by the high direction, and any kind of warrant that would be obtained towards this investigation needs to be approved by the director himself.” Province to launch inquiry

Quebec Public Security Minister Martin Coiteux said the province will put together an expert panel and launch an administrative inquiry. He said there will be an inspection of police, including the anti-corruption squad UPAC. The inquiry will “inspect the police forces and look at the policies in place,” Coiteux said. “There could be sanctions.”

He also said it was “odd” that police launched an investigation on the same day that then-SQ director general Mario Laprise received a complaint from former union boss Arsenault. “It is very peculiar. The head of the FTQ calls the SQ first thing in the morning, and that night an investigation is launched. This is a unique case which raises questions on its own, but it is the only such case in the last 20 years,” Coiteux said.

When contacted by Radio-Canada, Laprise refused to comment on the matter. He would only say that the inquiry will have to take its course. “I think we will have to wait and we will let the people do their jobs,” Laprise said.

Radio-Canada said it had information that Parti Québécois MNA Stéphane Bergeron, who was Quebec’s public security minister in 2013, was the one who asked Laprise to look into the FTQ case. Bergeron denied it. “I never asked for surveillance. It’s an action that I would have never authorized. It’s an initiative that I was never informed of until a few moments ago,” Bergeron said Wednesday afternoon.

Earlier this week, the Montreal newspaper La Presse revealed one of its columnists was the subject of a police warrant to track his cellphone communication. Montreal police obtained 24 warrants this year to track Patrick Lagacé’s whereabouts using the GPS chip in his iPhone, and to obtain the identities of everyone he communicated with.

The news prompted political leaders to call for a greater protection of journalists.

La Presse announced this afternoon it was taking legal action against the Montreal police force.

“I don’t think we’ve seen such a crisis here in the history of journalism. We have to get the facts and then make sure that measures are taken to make sure this doesn’t happen again,” said Alain Gravel.