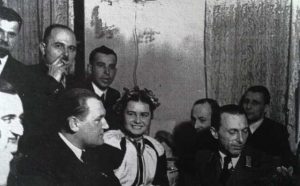 Photo showing grandfather of Canada’s foreign minister Chrystia Freeland at gathering of Nazi entourage in Poland (to the right of cigarette smoker, photo on Ottawa Citizen)

A news compilation on New Cold War.org on March 8, 2017 reported the controversy that has broken out in Canada surrounding the family history of Canadian Foreign Affairs Minister Chrystia Freeland. The minister told a March 6 press conference in Ottawa that inquiries into that history constitute a ‘Russia disinformation’ campaign directed at her and the Canadian government. Freeland and sympathetic journalists in Canada state that the ‘disinformation’ has been aided and abetted by unnamed ‘pro-Russia’ websites.

Canada’s largest circulation newspaper, the Toronto Star, has today broken its silence on the story, in a column by a senior columnist and in an editorial.

Columnist Paul Wells headlines his column, ‘War is hell and Chrystia Freeland has nothing to be ashamed of‘. As with several columnists cited in New Cold War.org. Information Report on March 9, the columnist downplays the published reports that Minister Freeland’s maternal grandfather, Michael Chomiak, was a German collaborator in Poland and Austria during World War Two. Wells writes, “There’s no evidence Chomiak wrote any of the anti-Jewish diatribes that flowed like sewage through the pages of the newspaper, Krakivski Visti. His state of mind at the time cannot be known to us. After the war, he told his family he had worked with the anti-Nazi resistance, helping its members get false papers. Perhaps it’s true…” 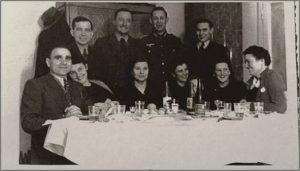 Wells writes further, “What we know is that if Chomiak was still alive at the end of the war, it’s because he took pains to stay on the right side of the murderers who had occupied Ukraine and Poland for the war’s duration. Everyone did. Everyone had to. You might be a resister for three hours a day after collaborating the other 21…” This is a terrible besmirching of the sacrifices made by millions of Ukrainians and other citizens of the Soviet Union in fighting the German Nazi invaders and occupiers. They chose, precisely, NOT to “stay on the right side of the murderers” and, instead, heroically fought against the invaders. Millions sacrificed their lives.

Wells then concludes his column with a variant of ‘beware of Russian disinformation’. He writes, “Chrystia Freeland is in the business of helping societies — ours, Ukraine’s, the world’s — stay on the side of sanity. It makes her a target…”

Like many other pro-German collaborators, Michael Chomiak settled with his family in Canada after WW2 and died in 1984.

The Star editorial is titled, ‘Conspiracy theories aside [??], Canada is right to stand by Ukraine’. It reads:

“Yet instead of focusing on the stakes involved in Ukraine and elsewhere in eastern Europe, what debate there has been on this has been hijacked by an entirely bogus controversy about the tangled family history of Canada’s foreign affairs minister, Chrystia Freeland.”

“Various pro-Russian blogs and websites have been pushing stories about Freeland’s grandfather, Michael Chomiak… Now pro-Russian and conspiracist websites are reviving the story and portraying it as a “Nazi skeleton” in Freeland’s family closet.”

World news outlets such as The Guardian and The New York Times are steering a wide berth around the controversy surrounding the Canadian foreign minister.

On February 22, the Toronto Star published a scurrilous op-ed by a ‘Marcus Kolga’ titled, ‘Canada is not immune to Kremlin manipulation and disinformation‘. On March 10, the newspaper published the following letter in response to the column. The letter is written by Tima Kurdi, the sister and aunt of the Syrian mother and her two children who made world headlines when they drowned in the Mediterranean Sea on September 2, 2015 while fleeing Syria as refugees:

I take issue with Marcus Kolga’s article in which he accuses NDP MP Fin Donnelly of failing to give me correct advice regarding my family’s refugee application. Kolga wrote: “The story was further sensationalized with the fabrication that [then immigration minister Chris] Alexander had denied a nonexistent request.” He also makes the accusation it was all fake news and it had a hand in altering the outcome of the federal election.

In fact, I went to the office of my member of Parliament, Fin Donnelly, as a constituent seeking help to bring my family to Canada as refugees.

In fact, Fin Donnelly personally handed Chris Alexander a letter that contained my plea to bring my brother Mohammed and his family to Canada. The letter also described the plight of both my brothers, Mohammed and Abdullah, and their families. My application was eventually denied a few months later. Neither Mohammed or Abdullah could come to Canada.

I’m not sure where Marcus Kolga got his information, but he has clearly distorted the facts. He should not be smearing a fine MP such as Fin Donnelly. I kindly suggest he gets his facts straight and that he not spread half truths about my family.

A commentary by Tima Kurdi on the situation of her country of birth, Syria, was published on February 8, 2017 by U.S. Congresswoman Tulsi Gabbard (D-Hawaii). It is titled, ‘My country was destroyed’.

Kurdi joined Rep. Gabbard at a media briefing in Washington on March 1, 2017 to support a bill that Gabbard has introduced to the U.S. Congress barring the U.S. government from funding and aiding terrorists seeking the overthrow of the Syrian government and other sovereign governments. View a report of the media briefing here on RT.com.

Canada has begun to supply the Ukrainian military with ammunition that is sure to be delivered to the conflict zone, Russian Foreign Ministry spokeswoman Maria Zakharova acccuses